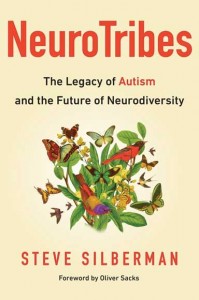 A month after starting to read Steve Silberman’s doorstopper of a book “Neurotribes” I’ve finished it at last. I’m so glad I read it on my kindle because at 544 pages in hardback it’s a wrist-breaker. That said, the painful wrists would have been well worth it.

Steve Silberman is an award-winning science journalist and polymath whose interest in people on the autism spectrum was sparked when noticing many of the IT professionals he was interviewing had children diagnosed as autistic. This observation resulted in his well-known 2001 article in “Wired” magazine “the Geek Syndrome” which you can read here: http://www.wired.com/2001/12/aspergers/

This is an excellent introduction for the layperson to the history of the diagnosis and treatment of autism spectrum conditions. It is easy to read and is essentially free of medical, psychiatric and neurological terminology.

At the heart of this book Steve Silberman tells the story of how two Austrian doctors, Leo Kanner in the USA and Hans Asperger in Austria, separately proposed the existence of autism at around the same time in the very early 1940s, and how Kanner’s narrow diagnostic criteria dominated the diagnosis, treatment, and public view of autism until Dr Lorna Wing in 1981 and Dr Ute Frith in 1991 began to promote and publicise Asperger’s work and repair the damage done by Kanner.

To over-generalise, Kanner viewed autism as limiting the abilities of those with the condition whereas Asperger – although perceiving autistic conditions as largely a problem of male children – saw that autism often brings with it a different way of thinking about the world and other people, different sensory experiences, and sometimes an extraordinary original scientific, technical or artistic creativity if only the strengths of austistic children are encouraged and not viewed and treated negatively or pathologised purely as symptoms of the condition. For instance a common autistic trait like hyperfocus or the ability to systematise should be treated as a strength not just pathologised with, to put it simply “she puts all her toys in a row ordered by colour and then size because she’s autistic, we’re trying to stop her doing it”.

Hans Asperger saw his young patients as individuals, each with particular skills of his own – they were all boys – and well fitted for particular occupations and ways of life, a vision that Steve Silberman has extended to the whole Autism Spectrum and to our “cousins” in neurodiversity, hence “Neurotribes”.

Steve Silberman ranges back before the careers of Asperger and Kanner to give credit to specialists like Grunya Sukhareva who in 1926 had already given a description almost identical to Asperger’s own of what was then called “autistic psychopathology”.  I wonder to what degree Sukhareva’s being a woman prejudiced the Medical Establishment against taking her work with due seriousness and to what degree her working in the Soviet Union did.

Silberman portrays with sympathy almost all the professionals we meet in this book but he does direct ire at Bruno Bettelheim who he credibly depicts as a dishonest egomaniac whose essentially baseless theories may have harmed countless lives.

Silberman takes us down the decades of the 20th and 21st Centuries showing the development of medical awareness of ASDs. He also describes the slowly improving prospects of autistic people, first campaigned for by the parents of ASD children particularly from the early 1960s onwards, and later by people on the spectrum themselves, up to today when men and – increasingly – women who have lived their lives without diagnosis until now are gaining diagnoses in mid-life that both allow them to understand their previously perplexing experiences and to bring to the autistic community the coping and life skills they’ve learned while struggling to pass as neurotypical.

On the journey Silberman introduces us to different people with autism, children and adults – I don’t want to describe them here, Silberman does a better and fuller job than I could – and each such biography shows us an interesting individual with kindness and understanding.

That said, “Neurotribes” is not a flawless book – it has two immediate faults.

One is Steve Silberman’s tendency to discursiveness – in telling us about even the minor actors in his history of autism he wanders down side-roads and stays on them for many pages, telling us in minute detail about individual lives. These discursions are usually interesting or amusing in themselves but they tended to distract me from Silberman’s main narrative and points.

I’ve discussed the book with two other people and both have mentioned how hard they had to concentrate to keep in mind Silberman’s point – whenever he climbs out along a branch of his narrative and stays there a while it’s hard to keep in sight the trunk of the tree.

The other problem is the tendency the book has to depict autism as high functioning autism. Aspies for instance are not the entirety of the autistic spectrum but in the book one often gets the impression that they are. There are many autistic people whose condition makes it very hard for them to connect with others, such as a little boy I know who at six is non-verbal and is distant and non-communicative much of the time, and there are others for whom autism is one of a suite of health conditions that have made their lives hard since birth.

Silberman does however tell some stories of classically autistic people who have gone from being autistic children excluded from the mainstream of childhood life to being fulfilled, successful and accepted autistic adults, some of them autism activists.

Still, not every autistic child is a little professor, not every autistic adult can found an IT company, and those of us at the high-functioning end of the spectrum should keep this in mind when we glibly say “it’s not a disorder, it’s a difference”.  We have autistic neurological differences so we have more idea of what it’s like for the more deeply affected of our autistic sisters and brothers than NT’s do – because of that, we have a responsibility to make sure they aren’t left behind or forgotten in our struggle for fairness and acceptance for ourselves.