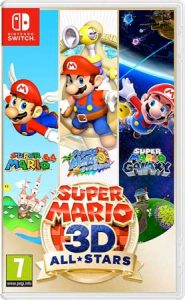 The games are basically hybrids of being emulations and ports but with some slight control changes you are mostly playing original releases though they have received a slight texture upgrades to the graphics to be on the Switch. the collection also comes with full soundtracks for each game in the collection which you can listen to with the system in sleep mode. Now because this collection is pretty much identical to their original releases I’m not going to say too much about the individual games in the collection except that all these are still really good and I would recommend them and I’d say I’m even warming up to Sunshine despite some of it’s issues. instead I’ll be talking more about how the transition to the switch has effected the experience of playing these games and if I think the collection is worth it

Despite some minor complaints this collection is completely worth it. to have these 3 amazing games in one collection is amazing and I’ve had a ton of fun revisiting these games. 64 is still really great, sunshine is better than I remember and I have a new appreciation for Galaxy. While Super Mario Odyssey is still my favourite Mario game playing Galaxy again on the Switch has really made me have a new appreciation for what a technical achievement it is. I didn’t put Galaxy 2’s absence in the cons section since I’m personally not the biggest fan of that game and wasn’t too upset by its absence in the collection though I acknowledge it’s a notable absence for many people. You really should get this collection though since all these games really hold up as some of the greatest platformers and this is one of the best ways to play them though I wish Nintendo had put slightly more effort into making this feel like a 35th anniversary celebration.

Absolutely recommend buying it but buy it quick because this is a limited time release until the end of march when it’ll be removed from shelves and removed from the digitally from the Nintendo Eshop (the latter of which especially is a dumb choice). if you can find a decently priced Physical copy pick it up but obviously due to the limited release this game is obviously hitting eBay with ridiculous prices thanks to scalpers so on that basis buying the digital release makes quite a bit of sense. the digital version of the collection is confirmed to price at maximum of £50, it doesn’t take too much space on the Switch since the entire collection is 5GB and you can redownload it any time even after March.
Calvin – Nerd Consultant
Share This Post: