Tell Me Why – Game Review 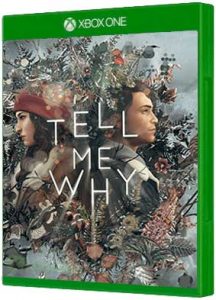 Tell Me Why is a narrative driven game made by developers from Dotnod entertainment, the developers behind the Life Is Strange games. This time the game is not being published by Square-Enix but instead by Xbox Game Studios to make it an exclusive to Microsoft platforms and is also being used as a way to bolster the line up for Xbox Game Pass which is looking better deal by the day. it initially released with just its first chapter in late August but received the second and third chapters shortly after which is welcome bit of fresh air considering that Life is Strange 2 took most of last year to release all 5 parts. The second and third chapters also come at no extra charge so once you pay for the game you get everything, both of which is likely as a way to make it more palatable for Xbox Game Pass streaming. Since this is such a narrative driven game as mentioned earlier I’ll be avoiding spoilers, but the basic premise is that twins Tyler and Alyson after being separated because of Tylor going to prison for the murder of their mother in self defence (it’s not a spoiler it’s the first scene of the game) they are traveling back to their childhood hometown of Delos Crossing to finally refurbish sell their mother’s house. However they begin to see visions of their past which suggest things might not have been the way they thought and they investigate using this new power to give themselves closure. Right off the bat the game is much shorter. While each chapter runs about the same length as typical Life Is Strange episode of around 3-4 hours there are obviously less episodes so it runs of a total run time of about 9-10 hours which obviously means you’re getting less play time than Life is Strange 1 & 2 which come in of a run time of 16 and 18 hours respectively but the beauty in these games is how they hold up to replays to see how events can turn out differently.

There’s a really good game in here but it really feels like a game that was put out quickly to be a selling point for Xbox Game Pass. It has good characters and acting but doesn’t know what to do with them and leaves a plotline with intrigue but no real consequence since choices don’t matter so much. I didn’t hate this game and was invested for the first 2 chapters but the third one made the game feel a lot more hollow once everything had been said and done. but felt a bit more empty afterwards compared to other Dotnod games which really had me invested by the end. It’s probably the weakest game the studio has put out in recent memory though I can sense there was a lot of effort and some good ideas here it just feels like they don’t pay off. though I have also been coy on some of my thoughts to avoid spoilers

If you’re at all curious and have a Xbox Game Pass subscription you might as well give it a go otherwise wait for a steam sale even with it’s reduced price of £25. If you want to get into these kinds of games though I’d sooner recommend Life is Strange 1 & 2, especially 2. They’re both slightly cheaper and where Tell me Why fails they suceed
Calvin – Nerd Consultant
Share This Post: