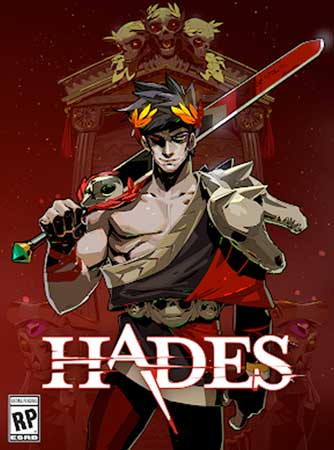 This is my first ever game review please be kind – Elliot

Hades is the newest game from indie game developers Supergiant Games, known for creating the critically acclaimed Bastion and Transistor. The game was first revealed at the 2018 game awards and was available in early access the same day exclusively on the, at the time new, epic game store until it’s full release when it came to Steam and Nintendo Switch on 17th September 2020. The game sold incredibly well, selling over a million copies in its first 3 days, with over 700,000 of the sales being from early access, and has received high ratings from critics and players alike.

Hades is an action roguelike presented in an isometric view, very much like Bastion and Transistor. While the visuals are very much like those games as well, it being 3d character models on a 2d, almost hand drawn, plain, its style is very unique to them, taking a lot of the Ancient Greek architecture and look that inspired the rest of the game. The game focuses on you going into different rooms where you have to slaughter a large variety of enemies, all of them being very distinct to what plain of the Underworld you’re in. Repeat this a several hundred times and you essentially have the entire game. Actually that’s being very unfair as the game does this really well, keeping all of the encounters unique, and ensuring that no battle will play out the same.

There are a large variety of enemies that you’ll have to face, all of them fitting the criteria needed for roguelikes, small enemies with small health pools that you’ll be bombarded with, with the chance of being overwhelmed, as well as larger enemies with large health pools that you’ll be facing in much smaller packs. Each of these have a small moveset, limited to one or two different kinds of attack, though this will not detract from the difficulty of the game, as their attacks have little to no wind up, meaning that you’ll need to be very careful of where you are and who you’re close to. That as well as the number of enemies you’ll have to handle, especially with the later areas of the game, increases the chance of death much more, which is very high to begin with. Some enemies will also gain shields the further into each of the areas you go, this will not only make the enemies have much larger health pools but will also make combat with them more difficult as these enemies will not flinch when you attack them, meaning that you’ll need to be much more perceptive of their movements and attacks.

As you finish battle in these rooms you’ll be offered a variety of rewards, like coins, upgrade materials known as darkness, gems and keys. The rewards you get will depend on the room you choose to enter and the door to the room will always display what reward you’ll get after beating it so it’s not a complete surprise. Easily though the best rewards you’ll be finding are the various boons that you’ll receive from the Gods of Olympus. You’ll come into contact with many of these Gods as you fight through hell and their boons will give you extra abilities, like being able to shoot lightning like Zeus, being able to deflect projectiles with the help of Athena and making the enemies drunk with the power of Dionysus. The most interesting is when you encounter the Primordial being of Chaos, who’s boons will make you weaker for a small number of encounters, in exchange for very powerful boosts that you’ll get after the weakness is gone. Don’t get too attached to these powers though, as you’ll lose them as soon as you die, and once again you will die, a lot.

The bosses are also a lot of fun, and where you’ll likely accumulate a large number of deaths. Each of them have expansive movesets that will always keep you on your toes and that you’ll have to keep an eye on. You’ll spend a lot of time learning from these bosses and dying in the process, for example one of the bosses took me at least 10 attempts till I finally beat it, and even then it was mostly thanks to the boons that I had picked up during that run and I just barely did it… only to be killed by some rats about three minutes later (oops).

Just like other roguelikes, death plays a large part in the gameplay. Once you die you better get ready to say goodbye to your boons and the extra health you’ve accumulated as all of it will be gone by the time you resurrect. When you die you’ll arrive in the throne room of Hades where you’ll be ridiculed by the King of the Underworld himself. It is here that you’ll also learn more about why Zagreus is on this quest to the surface as well as meet other denizens of the Underworld who will no doubt give you support and encouragement to keep climbing. It’s also here where you’ll be able to spend the darkness you’ve accumulated during your previous runs to gain upgrades that will significantly help you during your next attempt to escape. It’s also here that you’ll be able to use the keys that you find during your trek towards the surface, these are mostly used to unlock more powerful upgrades that you can spend darkness on, as well as unlock other weapons. There are a total of six weapons for you to unlock in this game, each one carrying different movesets which leads a variety of different play styles. The one that I found myself using the most was the spear because of its fast moveset and long range.

Whenever I died I never felt like it was the game being cheap and unfair and it always felt like my fault, thus each death felt like a lesson learned. While this is what I took out of it, it’s not gonna be the same for everyone, and some people (looking at you Calvin) will likely get easily frustrated from the number of times that they die, thus probably lessening the enjoyment factor of the game.

The characters are amazingly casted. All the voices match how the people and Gods would likely sound like and match their individual personalities, with each of them having individual ways of speaking that matches them almost perfectly. The writing is really well done, with what almost seem to be hundreds of different lines of dialog for each of the characters. Even after dying over 30 times and talking to each of the characters in the throne room, I’m still finding them saying different lines of dialog to me, which I always give my full attention to.

The game also has an amazing soundtrack, that you can hear on Supermassive Games’s Youtube channel, which I highly recommend listening to. The music fits the game perfectly, almost like it’s the Greek version of the soundtrack to a Prince of Persia game. A lot of the songs are weirdly quite somber and mellow at first but eventually ramp up and become much faster and more fitting to the action of the battles. Each of the songs fits the areas they correlate with perfectly.

The game can, however, get somewhat invigorating when you have to go through the same area time and time again, and have to face the same enemies all over again, especially when you’ve reached the higher areas of the Underworld and want to learn more on how to fight those enemies, but you have to run through the previous three areas and fight the same bosses over again in order to have another attempt at them. It can especially get monotonous during longer play sessions, as while you are getting different powers and experimenting with different skill sets, the primary gaming loop, beating up monsters, is essentially the exact same throughout and will likely get tiresome the more you play it. It does definitely feel more like one of those games that you play in short bursts at a time rather than one that you play for hours and hours (kinda like my experience with Hyrule Warriors).

While Hades isn’t a game for everyone, I am certain that those who pick it up will have a good time with it. I’ve been playing it for over a week now and I’m still yet to even make it to the end, but I am loving every moment of it. It’s incredibly fun, addicting, and every time I get even just a little bit further it always makes me want to keep going. This has already taken the place as my favourite roguelike, which once belonged to Dead Cells, and has made its way into my top 3 favourite indie games, and is likely to take its place as number 1 on that list. Many have claimed it as a likely contender for best game of 2020 and I can say that those claims are well met. If you haven’t played Hades yet, I highly encourage you to give it a go.