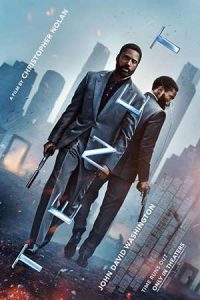 Tenet is the latest film from director Christopher Nolan, director of films like Inception and The Dark Knight trilogy, and it is the first major film to come back to cinemas. It’s also then rather surprising that the film has come out in the first place – it was actually considered for a July release but that obviously got pushed back because of cinemas closing, and I actually thought it would be joining onto several films that would be going for a straight digital release, like Disney’s Mulan. However, cinemas have welcomed the film and we have it now.

Tenet had one of the weirdest advertising campaigns I’ve ever seen. They actually showed off the early portions of the opening sequence in place of a trailer at the front of screens of several films. I did happen to see it at one point and it certainly had me intrigued, though I didn’t realise it was the opening segment; I assumed it was the middle of the film judging by the way the characters were talking. More on that later.

Now, Tenet has a really complicated plot which I really don’t know how to sum up, but basically the film revolves around an unnamed man that IMDB lists as the protagonist, played by John David Washington, who’s recruited into a secret organisation called Tenet that are trying to prevent some sort of time travel technology that can cause more devastation to the world than a nuclear bomb. He’s partnered up with a man named Neil played by Robert Pattinson, and they’re also investigating an arms dealer named Andrei Sator, played by Kenneth Branagh, and they team up with his estranged wife named Kat who’s played by Elizabeth Debicki, and it then goes into a weird time travel plot partway through the film.

I really can’t state how much I had no idea what was going on in Tenet! And before anyone says, “Well, you clearly didn’t get the film because you weren’t clever enough to get what it was on about,” no, I’ve got a lot of plots that were very complicated, alright. This is just incoherent. Seriously, this is one of the most incoherent films I’ve seen in a long time. Inception at least gave you a basis of what was going on. Hell, Paprika, the film that Christopher Nolan seems to rip off constantly gave you more information than this and that film was a bit of an incoherent mess as well, but that has nothing on Tenet. Tenet gives you no basis for what’s going on; it throws you so deep in the plot it’s unbelievable. You know nothing about the organisation; it takes ages for it to explain anything that’s happened; I don’t really even know much of what the bad guys want initially. It’s just: This is going to cause the end of the world, there’s some weird time travel going on, and it means that there’s a bunch of people where bullets fly back into the guns and they fight backwards.

Now, if there’s one thing I’ll give Tenet credit for it is very clever how they work the technology. The film does make the inverted movement look seamless, and from a visual perspective this film is excellent. The acting is also actually pretty good. I’m really becoming a big fan of John David Washington, especially after his performance in BlacKkKlansman, and this is another one where I think he’s definitely an actor to watch out for. I even actually kind of like Robert Pattinson in this film; it definitely eased at least a lot of my concerns about him playing Batman next year. There are also a few other actors that appear in there. This wouldn’t be a Christopher Nolan film without Michael Caine in, but there are also some other surprising actors in, for example I didn’t realise Aaron Taylor Johnson was in the film for ages – he’s downright almost unrecognisable.

But here’s the thing: Most of the characters are just identified by their archetypes; not enough people have concrete names per se. The film actually drops a massive bombshell partway through which actually really felt like it should have been mentioned much earlier, and it also gives the character some of the strangest motivation. But it at least gives the character motivation – the villain of this film really has no motivations until that point. But then let’s talk about the action scenes.

Now, I did mention that the inverted movement is at least done very well, but here’s the thing, the cinematography and the sequences fail it. Several of the action scenes are actually quite hard to watch and understand, which leads me to the final action scene: I had no idea what was going on in that sequence – it just feels like a bunch of random people shooting at random things and apparently some things are happening. I have no clue. This is one of the worst action sequences I’ve seen in a while, and I hate to bring it back to this, but look at how the Marvel films do things. Those are major blockbusters with big action sequences but they learn to pull the camera back and put effort into the choreography, not just fling the camera around and have lots of big noises and explosions.

Speaking of noises, I don’t know who did the score for this one because the score is pretty good, but you’ve been done a disservice because can I say to the sound mixing department to TURN THE MUSIC DOWN! My God, this film has some of the worst sound mixing I have ever heard – there were several scenes where I couldn’t hear the characters speaking over the music! Yes, Nolan, there’s clearly been a lot of effort put into this film’s music, but I need to know what the characters are saying. I shouldn’t have to put subtitles on to know what is happening. A lot of people have said that this a film that you’re going to have to watch twice to fully understand what’s going on, and I’m sorry, that is a failing of a movie. I should at least be able to get the basics of a film, and then a repeat viewing will make it interesting with my knowledge of the outcome but this film feels like you need to watch it twice in order to understand the bare basics, and again, I repeat, that is a failing on storytelling! And it really comes off as rather pretentious. Tenet even kind of hints at being the basis for a bunch of prequels and sequels. Just no, I’ve had enough!

Tenet is going to be my film for this year where I’m going to completely disagree with the critics – they lavished this film with praise, but for me this film is an incoherent mess. It’s way too long, coming in at 2.5 hours. Granted, the special effects are good and some of the action sequences are alright and the acting is done fairly decently, but the dialogue is atrocious, the plot is incoherent and nonsensical, and it reeks of pretension. This is the sort of action film I’m really hoping is not going to become the norm down the line. Say what you like about the Marvel films, at least they’re coherent. Hell, the DC films are more coherent than this. And I’m including Batman v Superman in that list! Yeah, that film’s rubbish in terms of its plot but at least I know why it’s bad and everything that’s actually happening. This is not the film to go back to cinemas for, and judging by the fact that my next review is probably going to be The New Mutants, it’s probably not getting much better from here.
Calvin – Nerd Consultant
Share This Post: