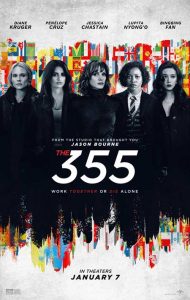 Look, I don’t want to spend too long on this film because frankly, The 355 is rubbish. One of the first films to come out in 2022, releasing the weekend after New Year’s weekend, it’s arrived in dumping ground January. And it seems to follow suit—studios releasing terrible projects that they’ve tried to fix in the editing room and have been released at a time where a lack of competition is more likely. It’s why I say January is one of the best months to skip going to the cinema. The posters state: ‘From the studio that brought you Jason Bourne’ because they don’t want to say: ‘From the writer and director of X-Men: Dark Phoenix’. Yep, this is another project directed by Simon Kinberg, and it has a lot of the same problems that Dark Phoenix had of it being a very dull and drab film which has no idea what it wants to be and has clearly received tons of cuts in the editing room.

The film in a nutshell is supposed to be a sort of rogue espionage team made up of five people going behind their agencies’ back to get a MacGuffin; in this case it’s a computer drive created by a cartel that can get through almost any locked door and can’t be cloned because it will delete itself. The team is made up of a CIA agent named Mace played by Jessica Chastain; a therapist for Columbian services, Graciela, played by Penelope Cruz; a German operative, Marie, played by Diane Kruger; an MI6 agent, Khadijah, played by Lupita Nyong’o; and a Chinese agent named Lin Mi Sheng played by Bingbing Fan. Honestly, not much more to it—they all want the computer drive and they want to get it back. They work together because “the enemy of my enemy is my friend”, and they’re formed in the most contrived way possible.

I honestly don’t know what to say about this film; this film is so dull. The only thing keeping this thing together is the all-star cast since all the women have big personalities, but man, some of them feel wasted. I’m particularly looking at Bingbing Fan who, despite the fact she’s featured prominently on the poster and in the advert campaign, I don’t think she’s in this film for more than half an hour. This film was clearly trying to do the globetrotting espionage of things like the Bourne movies and I also get a distinct sense of Fast & Furious without the cars. But it doesn’t have the personality of those films. This is one of the most dry, dull, boring messes. It really feels like there are no characters in this; no one really has much of a character or anything to develop. Everything’s just kind of there and you get a sense that everyone was just going through the motions throughout making this. The plot just feels like it’s there to facilitate the action; this is most exacerbated by the fact that there is not really a constant villain.

There are lots of different factions trying to get this computer drive, which, by the way, when you say it out loud makes it sound like the most 90s movie ever. The film early on goes for a British gangster being played by Jason Flemyng but he’s barely in the movie and it’s one of the most thankless villain roles I’ve ever seen. They’re trying to make him intimidating but they don’t have any action to show that. Mainly because, again, they give this film a 12A rating which means they can’t show much of anything. Sebastian Stan also has a small role himself but, despite playing the Winter Soldier, he doesn’t get much to do either and also feels incredibly wasted. Despite the fact the film wants to put a lot of focus on Jessica Chastain, and the fact she’s a talented actress which does keep this film from completely sinking, the script fails her constantly. She’s playing one of the dumbest characters she’s ever played. She constantly falls for ploys or does something really stupid when there could have been something way smarter that would’ve got the exact same result.

But that has nothing on the fact that this film has a terrible plot twist in the third act. And it’s one of the worst kinds of plot twists—it affects nothing. It only explains one aspect of the story but then it’s quickly forgotten and doesn’t really do anything. In fact, while not putting it in would have opened up a plot hole, it actually raises further questions about one character’s motivations. Also, I don’t know what someone was thinking when they put these action scenes together but they’re shot appallingly. There are lots of quick, shaky-cam shots to cover up the fact that there’s no choreography to these action scenes. I really can’t follow what’s happening half the time. A good action scene allows you to map the environment and see every move taking place. This one doesn’t really have that option so they have to quickly cut things together and zoom in tons of times which fails miserably.

Apart from all that, the film is frightfully boring; it is just a “get the MacGuffin” film that has no teeth to it. This is like every other dumb espionage film trying to cash in on much better contemporaries that you’ve ever seen. It feels as corporate and cookie cutter as they come, and despite the fact I get the sense that the creators want this to be a franchise starter, I think their January release pretty much confirms they’ve looked at the final result and realised that’s not going to happen. The 355 is so frightfully boring I almost could not be arsed to review it, that’s the stage I was at with it. I have not much nice to say about it except for the fact the cast is actually very well cast although wasted, particularly Lupita Nyong’o who is fast becoming one of my favourite actresses in films right now given her excellent performances. She really needs to consider the scripts her agency’s giving her right now. The film overall is a mess, pure and simple.
Calvin – Nerd Consultant
Share This Post: