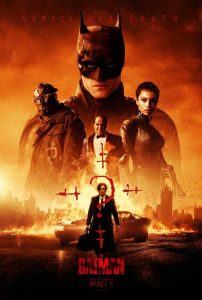 The Batman is directed by Planet of the Apes director Matt Reeves, and is now the fourth time we’ve had a Batman reboot. I think the whole concept of Batman bears no introduction, but it’s very clear that Matt Reeves envisioned for this to be a big deal. He’s got an all-star cast and has been working on this for quite some time.

The biggest source of speculation was the casting of Twilight star, Robert Pattinson, in the role of Batman and considering that this is most likely where the film will live and die, I’m going to break away from my usual formula and talk about that. Pattinson is, in a nutshell, pretty good as Batman. I’m not sure at this stage how I would rank him against the many other actors who have played Batman, but when he’s in the suit he does look and act the part. The only place where I’m not entirely buying it is him as Bruce Wayne. Personally, he seems to be another actor who can’t seem to get the balance entirely right which is something I’ve noticed from every actor who has tried to play Batman. But on this occasion, I actually think this is more of a script issue – Pattinson isn’t given a lot of time to play Bruce Wayne. The film makes it very clear that this is set at a time when Bruce Wayne is rather reclusive and is making very few public appearances, almost devoting himself entirely to being Batman.

There’s actually a rather simple storyline, something that I thought Batman films should have done much sooner. To not give away much detail, it follows a series of murders carried out by a new criminal, known as Riddler, who livestreams his murders of corrupt Gotham City officials to the internet. Yes, Riddler in this continuity is essentially a Twitch streamer, only he’s demented and I think he’s supposed to be some kind of allegory for a political movement but I’m not sure what. I think Matt Reeves had a lot more ideas for Riddler’s motivation which didn’t end up making the final cut., which is very strange to say, because the film is very long (including credits, it’s 2 hours and 55 minutes long, making it the longest solo Batman movie to date). That’s seriously a lot considering it’s not meant to be an epic, it’s very much a noir murder mystery which is an interesting difference because we haven’t really seen a film that goes into Batman’s detective side yet, as a result, there’s not really much in the way of Batman’s rogues gallery, the Riddler is the only constant. Of course, anyone who remembers the days where Batman took on the mafia will remember Carmine Falcone, who is played by John Turturro in this film and is one of the best parts of this movie, he seems to steal the show whenever he’s in a scene.

The most drastic one for me was Colin Farrell as Penguin, the images have gotten out now already of him with the fat suit and all of the makeup, and he is really unrecognisable in the role. The makeup team has really one an excellent job in this one. The one thing that really disappointed me with Penguin in this one is that once again he has a thick American accent – the thing about Penguin was that he was created to be a mocking representation of the British class structure, so it always feels weird when writers and directors try to Americanise him.

Now one of the other excellent casting choices was Zoe Kravitz as Catwoman. When I heard Zoe Kravitz was going to be in that role, I was wondering what she would bring but wow, she did a fantastic job. In my eyes, she is now the definitive Catwoman. She really suits the role! She is probably the closest to her comic counterpart compared to all of the actors, though I get a sense that most of her storyline was drawn from The Long Halloween, which received a Blu-Ray adaptation last year in animated form (which if anyone read my review would know I recommend completely).

If you’re going to do a murder mystery, you need to make the mystery aspect not too daunting or complicated. I think that the film does that well but it’s not too interesting either. Comic fans already know the name of Riddler, in fact, a lot of people remember Jim Carrey in the role previously. The investigation aspect of the film does an excellent job, especially considering that Batman has to work more and more with Jim Gordon, who is played by Jeffrey Wright which is another brilliant casting choice! The film really does nail the relationship between Batman and Gordon really well. More of the joy in the investigation comes from Batman solving these mini puzzles instead of the big picture. In fact, we don’t get the big picture until very late in the film, and I actually thought that it was a bit of an anti-climax in the end.

The weird thing is, though, one of the reasons I was excited for Reeves to direct this film was not just because I was a big fan of his Planet of the Apes films but because I also think that he is an excellent character director, he really knows how to gives his characters excellent arcs and makes the story personal. He certainly almost gets there with The Batman, but I also think that he has a rather outdated idea of Batman that he brings into this film, which I really disagree with. I wouldn’t want to say exactly what it is, but I will say that for fans of Batman: The Animated Series, it’s a direct inverse to one of the episodes. I actually kind of wish that Reeves had watched that episode because I think that it refutes one of the final points he makes in the film.

I do think the film has excellent action scenes and a brilliant car chase as well, but I’m a bit mixed on the new Batmobile. While on the one hand, I do think it looks really cool and looks the most practical since Batman Begins, the sense of technology in it is not really there, I kind of wouldn’t mind a redesign in the next movie.

The fight scenes are really well choreographed, Matt Reeves does a really good job knowing just how many takes and how many cuts for the scene he needs, and it’s all edited really well together, which gives you a good sense of how the fight is going.

The Batman is what I would describe as a ‘good Batman movie’, though at this point I’m not really in the camp that thinks that it’s the best Batman movie to date. When the film is really good, it does feel like this new film series could be going in some really great directions. Believe me, while there aren’t any post credit scenes, this film is setting up for new films down the pipeline. It does have some things that don’t quite work, the narration is sometimes quite hammy, and I think some of the scenes go on way longer than they need to, and I don’t agree with some of the conclusions the film comes to. But as a whole I think The Batman is very good overall. I’m not sure how fans of the Dark Knight trilogy will feel about this film overall since it’s very different in comparison.