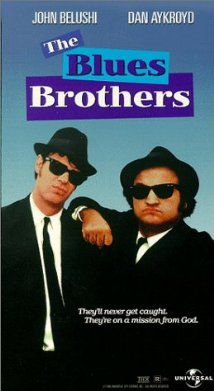 Is this a situation anyone can relate to?… One is in midst of conversation, and suddenly a thought comes to mind – from where you know not, and, from subconscious depths, without further “due diligence” one vocalises said thought… Is that a common experience?

I bring it up purely because it happened to me recently, whilst talking with Carly about the launch of “User Film Reviews” on the Axia Film Society page, I “blurted out” that I could perhaps write a review on one of the few films I could actually say played a pivotal point upon my path, was “life changing” to a large degree, the original “Blues Brothers” film from 1980…

As I sat pondering the strange situation of reviewing a film released 35 years ago, I questioned my self – “How can I do justice to this ‘Great Work’, this ‘Piece of Art’???” And suddenly the voice of Aretha Franklyn suddenly rang in my head…

– a direct quote from The Blues Brothers. I had failed to give adequate thought to the idea of reviewing such a personally profound film, so please forgive me if I am unable to impress upon those reading, that this film has a “cult following” for a very good reason!

As a teenager I loved films and I loved music, but I hated musicals (“My Fair Lady” destroyed “Pygmalion” for example, in my humble opinion of course). The Blues Brothers is perhaps the only exception to this rule which I know of. 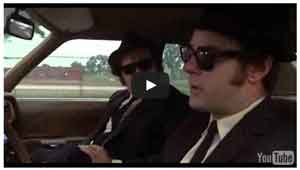 The film starts in a dark and ominous manner, a fly-over of a smog ridden Chicago, then takes us to the State Penitentiary to see the release of one “Joliet” Jake Blues. There is no music and little dialogue to start with, but it becomes apparent that this film is a comedy as the prison guard (played by Frank Oz, one of the many many cameo roles in the film) releases Jake’s possessions to him… I won’t spoil the gag by revealing it though. Jake stands at the prison gates only to be met by his brother Elwood in a beat-up old police car. It is at this point the first song kicks in, “She Caught the Katy” which is sung by The Blues Brothers (as many of the films songs are). You can watch this on YouTube by clicking the picture above.

The characters of Jake and Elwood Blues originally started as musicians on “Saturday Night Live” played by Dan Aykroyd and John Belushi, dressed as either “Hasidic diamond merchants” or “The CIA” (as Aretha Franklin describes them). Aykroyd went on to write the script for the film which John Landis whipped into shape and then directed, superbly.

To provide a brief synopsis of what follows over the next 2 hours plus, Jake and Elwood return to the Catholic orphanage where they were raised only to discover it will be closed down within days. The head nun, “The Penguin” (as Elwood affectionately refers to her), refuses to take their “filthy stolen money” and tells them not to return until they have redeemed themselves. I should add at this juncture that for me, this essentially IS a film about “redemption” in many ways. They then meet the janitor (played by Cab Calloway) who advises them “You get wise, you get to church”, which they reluctantly do. 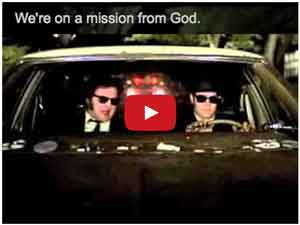 In church Jake is hit by an invisible light which only the preacher (played by James Brown) and Jake see, and suddenly Jake knows what they need to do… Get the band back together to earn the money to save the orphanage, and the rest of the film follows them on a comic and cartoon like journey doing just that, following them on their “Mission from God”. This premise and reference may be offensive to some, amusing to others, whilst personally I found it enlightening! 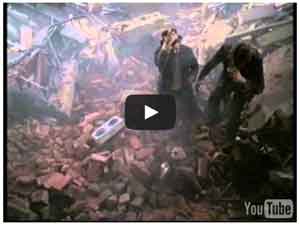 I use the word “cartoon” to describe the film because, despite buildings exploding on people, being shot at with machine guns, flame throwers and bazookas, and the “Blues Mobile” performing impossible maneuvers, everybody appears to get up and walk away from every unbelievable event (as this YouTube clip demonstrates). As Jake and Elwood search to find the original band members, they manage to build up a host of enemies starting with the police, Illinois Nazis, a country and western band and a mystery woman to name but a few! Back in 1980 when the film was released it was said to have had the most expensive and destructive car chase in history which started with Elwoods line “It’s 106 miles to Chicago, we got a full tank of gas, half a pack of cigarettes, it’s dark and we’re wearing sunglasses” and Jake replying “Hit it”.

This is perhaps the films most famous quote, considered “legendary” by some, and often seen on t-shirts back in the 80’s. Unfortunately it is also one of the few lines I feel comfortable quoting in this arena, as many of the funniest lines which I recall contain vulgarities and swear words, hence the film receiving a ‘15 certificate’.

I don’t tend to think of Americans being very good at making films with subtle and clever wit, and for me there is a certain “Pythonesque” quality to “The Blues Brothers”, which as I write this, am suddenly seeing for the first time the similarities between Pythons “Life of Brian” and “Holy Grail” which are of an ilk I believe. The combination of crazy characters, ridiculous situations and a brilliant script, plus the Blues Brothers had the added bonus of introducing to me a musical genre which altered the direction of my life – Blues, Gospel and Soul – hence my earlier description of this film being “life changing” for me.

I became obsessed with the film, purchased the video, bought a suit, hat and sunglasses, ALL their records, even painting my Mark I Ford Escort with black and white hammerite paint. Ironically, on my first journey out in the car I was stopped by the police!!! I wore the outfit for a few years before exchanging the white shirt and socks for black ones. Don’t believe me? Well guess who this photo is of…

Notable hit’s from the film include “Everybody Needs Somebody to Love” and “Think” released in the UK in 1989 and reaching number 12 in the charts. Both can be seen on YouTube. 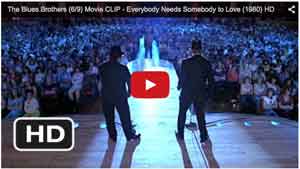 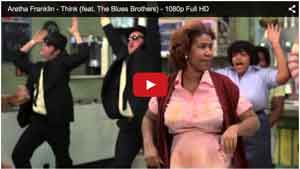 Other classic songs in the film include the “Peter Gunn Theme”, “Gimme Some Lovin'”, “Shake a Tail Feather”, “Theme from Rawhide”, “Sweet Home Chicago” and “Jailhouse Rock”. Also the “Blues Brothers Theme Song” which is an instrumental version of “I Can’t Turn You Loose” written by Otis Redding. John Lee Hooker performs “Boom Boom” in a scene outside Matt’s Diner, and “Boogie Chillen” is also in the musical score.

When I first watched the film some three decades or so ago, it was 133 minutes, which was considered long in those days (and still is I suppose). Not having access to a video recorder anymore, I watched the current release (the 25th anniversary edition) only to discover there were scenes I didn’t know the words to (my obsessive compulsive nature meant I’d watched it so many times I knew it virtually verbatim for some years!). It transpires an additional 14 or 15 minutes have been put back in from what I can tell. I can’t say they aid the story in any way, on the contrary, Elwoods resignation from work and a clip from outside the church actually detracted from the original version from my perspective. 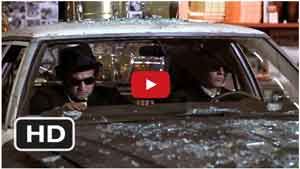 Or maybe it is simply because I perceive this film as a beautifully crafted work of art which I would recommend to everyone to watch – or watch again if they haven’t seen it for some time!

The original trailer was a very poor advertisment for the film in my opinion, however the “Official Trailer” for the 25th Anniversary DVD release is a little better…