The House with a Clock in Its Walls – Review 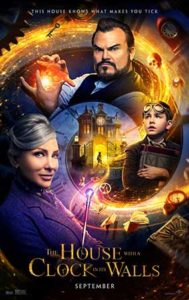 “THE HOUSE WITH A CLOCK IN ITS WALLS”

The House with a Clock in Its Walls is a film that took me off guard in several factors. I actually didn’t know it was coming out for one, and on the other hand it was also a film that surprised me when I found out more about it. This film was to be a family friendly film but it was directed by Eli Roth, if you’re aware of films you know those two wouldn’t necessarily go well together. In case you don’t know Eli Roth is a world-renowned horror director, having directed the 2002 version of Cabin Fever, as well as Hostel which helped bring in the torture porn genre along with its sequel, a segment for Inglorious Bastards and lastly Knock, Knock. Now in recent memory he has started to move away from that. This year alone he directed the death wish remake starring Bruce Willis which I haven’t seen ye but have heard mixed reports on. So needless to say, this seemed like a really weird decision director wise, especially considering working with Jack Black who is a family orientated actor.

The film is based on a book from the 1970’s with the same name, by John Bellairs which hasn’t received an adaptation until now, probably because of the high concept of the idea, would mean that special effects would have to cover long before it could have been done. I suspect Universal Studios who are distributing the film, were trying to bank on the nostalgia craze set by Stranger Things, a little more on that later.

So how do I think it turned out… Let’s start with the plot. The House with a Clock in Its Walls is about a young boy named Lewis, played by Owen Vaccaro, having to move to a new town after his parents die in a freak accident, to live with his Uncle Jonathan, played by Jack Black, who has a crazy neighbour named Florence Zimmerman, played by Kate Blanchett. He soon discovers that his Uncle is in fact at a warlock and has to be taught in the art of witch craft. His Uncle kind of reluctantly accepts that as a way of bonding and he slowly begins to learn. However, it is becoming apparent that his Uncle is tormented by a clock that shows inement danger, has been placed in the walls by old friend Isaac, played by Kyle MacLachlan and they have to find the clock before it stops ticking.

Ok, I envy Eli Roth for trying something new, but this film is all over the place. The one thing I have commonly heard from people who have seen this film is they have no idea who this film is aimed at. I actually got a first hand example of this when I went to see the film. I saw the film at around midday on a Friday, so obviously there wasn’t too many younger kids at the screening, though there was a few in there for whatever reason. This was a film where they were kind of into it at first, and then it dropped off toward the end. This is because the second half of the film, took a much darker tone. Not full on dark, they would never get away with that but wow does this film get much darker in the second half. Which incidentally is where I thought the film actually improved.

The first half was just a very generic family film, you’ve seen it a hundred times, this sort of things been done before etc. You get the drift. There have been a million films like this. In fact, it very heavily reminded me of the recent Goosebumps film, not helped by the fact that Jack Black had a leading role in both films.

The second half of the film, where it takes the darker tone, things do improve since it goes a bit against type, but it still tries to maintain a bit of its family values. Clearly it doesn’t quite work for younger children, because I actually saw a few walk out of the cinema when I was there. I was actually a bit annoyed by this as I thought their parents were being right snowflakes and they are the reason why family films are so much less edgy than they used to be and children’s entertainment has become so sanitised. However, it does highlight a very decent point, which is that this film is clearly not succeeding in that regard.

So maybe this film is aimed at a bit of an older crowd such as pre-teens and younger teenagers, but I don’t think it works in that regard as they would be bored by the first half, which is much more childish. For example, there is a living lion hedge that has a gag about pooping leaves, yeah it’s just as crude as you think it is. I groaned every time that cat was on screen. The film also has many more gags like that, and its generally not a very funny film.

If I can say one thing it will be that the practical effects were actually quite good in this film, but, the digital effects are atrocious. This is a film where the effects feel very out of date and i’m not sure where the budget entirely went.

Jack Black is very good in his role and he has good chemistry with Owen Vaccaro. In fact, it kind of made me wish the whole film was about them, more slice of life story. Kate Blanchett is also pretty good in her role, she’s actually one of the best parts of the film. The less so can be said about some of the other actors.

As I said this film feels like it’s trying to capitalise the nostalgia craze set by Stranger Things, but I think that’s another part about the films confused tone, since the film is set in the 1950’s. While it does have some nostalgic elements, like some of the stalls that Lewis goes to the biggest throwback is to cereals such as Flash Gordon. Pulpy sci-fi is referenced in this film quite a bit.

Now I will say something positive about the film. Eli Roth is trying something different and he does put his own touch on the film. The problem is that only really comes out in the second part of the film, by then it, kind of lost me on at least one level. The first half of the film I really was saying, where’s Eli Roth’s personality. It’s an ambitious film for Eli Roth but it’s one that feels like it’s at the expense of its audience.

The film is too dark for younger children, but it’s not dark enough for their older siblings. The theme comes off as a bit of a generic mess. Jack Black, Kate Blanchett and Owen Vaccaro are all putting in good performances and their characters do at least have some dimension to them, but the script fails them constantly. The effects are tragic, the only thing more tragic is the humour which did not get me to laugh all that much.

This film is really a rental or if you ever see it on Netflix it might be worth a watch around Halloween, which is another thing that staggers me about this film. Its late September release means it won’t make the money it could have made if it had come out around Halloween time.

Well that’s it for another week. Next week I need to do some unfinished business. I’ve done two DC films this year so it’s time to do the last one since I make it a rule for myself every year. I’m reviewing The Death of Superman.

With all that being said, hope you’ve enjoyed reading this review as much as I’ve enjoyed writing it
Calvin – Nerd Consultant
Share This Post: