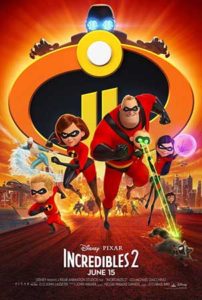 Yes, I am aware I was supposed to be reviewing Sicario 2, but a combination of scheduling conflicts prevented me from doing this, plus I had no idea that we would be getting Incredibles 2 around this time.

When I was looking at all the Pixar sequels I kept thinking why not Incredibles 2 it makes perfect sense for me and I felt like it had the most material to draw from and most potential in the future. Fourteen years after the fact, and several Pixar movies later, including the cars sequels as well as Monster’s University and the previously reviewed Finding Dory so a mixed bunch, if we are being kind and only because Finding Dory was in the list and I didn’t mention the fantastic Toy Story sequels, it finally come about. The Incredibles 2!!! Brad Bird even returned as writer and director, honestly, I’m amazed Disney were actually allowed him to even come back to this film, considering how badly Tomorrowland tanked.

So, when it comes to Incredibles 2 how did the Pixar sequel I wanted to see come back. Well it takes place after the events of the first movie… literally. Remember that credit scene which lead us into the villain the Underminer drilling up from the car park and the family suiting up? It literally starts from that scene. After that rescue doesn’t quite go according to plan, the intensity against superheroes is beginning to heat up. However, a tycoon named Winston Devour played by Bob Odendirk approaches Bob Parr, aka Mr Incredible, played by Craig T Nelson, Helen Parr, aka Elastigirl played by Holly Hunter and Lucious Best, aka Frozone played by Samuel L Jackson. Along with his tech savvy sister Evelyn, played by Katherine Keener, Winston reckons he can use his technology and business know how to make superheroes legal again, but he needs to strengthen public support using Elastigirl as she will potentially cause less damage and go down better with the public. In order to take this job offer up and make superheroes legal again he agrees to let Helen take up the superhero job, while he takes care of the kids: Dash played by Huck Milner, Violet played by Sarah Vowell and Jack-Jack played by Eli Fucile.

To be honest it feels a bit like a sitcom more than anything else, the domesticity of the scenario is highlighted a lot more. The first film was about a father going through a mid-life crisis, whereas this film is more about the idea of the changing roles in the family. These aren’t necessarily bad things, but it’s actually more interesting overall. There are quite a few gags in this movie, but if you have seen the trailers then the likelihood is you have seen most of them. There’s not much more added to the film than what was in the trailer, which is surprising as this is a 2-hour movie. Now the other factor kept out of the trailers is the villain- a mystery hacker named Screenslaver. The villain actually is alright in this film but not as memorable as Syndrome from the first movie, nor do I think when we find out the villain’s motivation, it doesn’t feel very satisfying. Certainly, it is a lot more difficulty than Syndromes motivation but also kind of complicates the film in some ways. You will have to watch it to see my point.

I don’t think we realised how much the Incredibles matched the time period it came out in. The first movie was about a world rejecting superheroes at the time, it’s quite forgettable now considering how successful the marvel movies have been aswell as Chris Nolan’s, the Dark Night Trilogy, but in 2004 when this film came out superhero movies were considered dead. Thanks to several flops and the idea of doing a superhero movie was an atrocious idea. Comic movies were not being thrown out left right and centre like they are now, so the idea of a super hero movie being made by Pixar was a bit of a gamble and the movies narrative reflected the publics thought on this. The thing is though 14 years later a film with superheroes seems disingenious right now and kind of weird.

The film also hasn’t really done much different in the 14 years. The first movie really was a credit to the golden age and the silver age of comics, the film maintains that futuristic style as imagined in the 1960’s, so its maintaining that sort of pulp an sci-fi feel they had then in superhero films. This is of course the age which gave us a lot of what we know about superman’s modern origins as well as green lanterns. This was rather surprising to me as I thought it would reflect the bronze age of comics this time round given that it was a sequel, considering how polarising the bronze age is I think it might have been a wise bet to just stick to the gold and silver age.

Much of the first film was just Mr Incredible who happened to have a family which appeared half way through the film to team up. This one kind of feels the same, apart from Elastigirl is actually in the front line. The super herop action is actually done really well, incorporating her powers in a lot of inventive ways. I kind of think the film starting off from where it left off is a little bit lazy.

The reason that the Toy Story films did so well, is that they grew up with the audience who saw them the first time round. That’s why Toy Story 3 appeals to the young audience, and the now adults who had grown up with the earlier films. That’s what I was expecting with the Incredibles 2, that they would age up the kids and make them the leads maybe even having children of their own, like I said there has been a 14-year gap between these. Surprisingly that is not the case, as a result it keeps the film on training wheels it doesn’t really need. The Incredibles was a very popular movie, so I’m not surprised they wanted to stick with what worked, theres just not that much new this time round. The characters are not much different to what they were before, which is fine I liked the Incredibles it’s one of my favourite Pixar films. I would just rather it went down a different route as I felt there was a lot to explore with this film. This was a film I found thoroughly entertaining, it has a good pace, consistent plot even if there are a few predictable moments.

A great moment is a fight between Jack-Jack who’s just getting his powers, and a raccoon in the family garden is hilarious and could make for a great short animation in itself. At the time I was thinking this is probably the closest we will get to a super hero vs the guardians of the galaxy. They brought back Edna Mode who is once again played by Brad Bird and again, she is the funniest thing in the movie. I appreciate so much that they did not expand her role any further than necessary. Brad Bird knew she was a cameo and nothing else, over-exposure would have ruined the character.

The acting is pretty decent all round, with Holly Hunter doing a very good job reprising her role, Samuel L Jackson does well to considering he is in a lot more scenes this time, and new comers like Breaking Bads, Bob Odenkirk do well. There are also some very good voice actors such as Sophia Bush, Isabella Rossellini and Phil LaMarr.

As for the animation, Pixar maybe did not receive as much of a budget it does not feel much has changed in the years between now and the first film. The animation just feels like an update of the 2004 like a car just with a repaint of the same colour which was there before. So basically, it’s the exact same thing, but you wouldn’t really have known there had been an update until someone told you.

The action scenes are damn good, although in my screening it felt a lot as though it was made for the 3D conversion which stood out a lot more since I saw the 2D version, again because of scheduling reasons. I normally like to see animated films in 3D as it is one of the formats that works quite well.

While it does feel like it’s kind of treading water with its concept and its story line, I still think it is a pretty good film and sequel to the first film. If you weren’t that impressed the first time you probably won’t really like this film and don’t go in expecting anything new. But as far as a good kid’s superhero movie goes this is pretty good.

Well next week I’m not going to subject myself to the horror of watching the Mamma Mia sequel I will be reviewing Artimus.

Hope you enjoyed reading this review as much as I enjoyed writing it.
Calvin – Nerd Consultant
Share This Post: