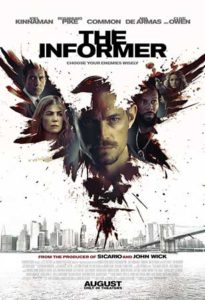 ‘The Informer’ is the latest film to come from the producers of ‘Sicario’, a fact that was advertised quite heavily through the marketing campaign for the film. What’s really surprised me is how low-key the film has turned out to be on that basis. It’s a film that comes to us from director Andrea Di Stefano, who is a prominent writer and actor but, prior to this, has only directed the biopic, ‘Escobar, Paradise Lost’.   The film has surprisingly few screenings. I went to see it on opening day and there were only two screenings in the most prominent cinema in Liverpool, and several cinemas weren’t showing the film altogether, surprising considering how often I’ve seen the trailer for it.

‘The Informer’ can best be described as a gritty crime thriller. It’s about a member of a Polish drug cartel in New York called Pete Koslow, played by Joel Kinnaman, who’s planning to inform on his boss, which would result in a massive conviction and safety for his family. However, during the final operation overseen by Erica Wilcox (played by Rosamund Pike), an undercover New York city police officer is killed, and the boss is ticked off, since a dead cop is bad for business. As a result, he makes him a deal. Since it’s happened on his watch, he won’t hurt Koslow’s family, so long as he breaks his parole, goes back to prison and becomes his drug supplier from inside. The FBI believes that this will be the best solution to the problem, since that way he can gain the information and they will then get him out as and when they need to, when the mission is done. However, after people start investigating the cop’s death, an investigation lead by Officer Grens (played by Common), Agent Montgomery (played by Clive Owen) orders that they break the deal after he’s gone back to prison.

‘The Informer’ is based on a novel written by Anders Roslund and Borge Hellström but as I haven’t read the novel, I don’t know how accurate this is to the book.

Let’s just say ‘The Informer’ is a film that is going to feel very familiar for various reasons. It is not a film that’s very similar to many others like it. That’s not necessarily a detriment against it; it’s very hard to be original these days with so many films and other media coming out. But when I was watching it, ‘The Informer’ reminded me a lot of the TV series, ‘The Wire’, mainly in how most of the characters are the good or at least the least bad people caught in the middle, and the only true villains are the higher ups who are just looking for any way to maintain their own self-preservation.

In the cinema, I overheard someone say that they found the plot complicated, but I would have to disagree with them – ‘The Informer’ is not a complicated plot, it’s actually very simple and to the point. There are not too many conflicting plotlines, in fact, there are only really two, three if you stretch the definition. They all are centred around the same incident and same outcome. It’s not like this is a film that’s hard to follow, it just has quite a lot of plot in certain areas.

Now, ‘The Informer’ is a traditional crime drama, but you can definitely tell that some of the minds behind ‘Sicario’ have been involved in this one, since this film is really trying to emulate it, particularly in its camerawork and editing. Even the soundtrack feels very similar to Sicario’s soundtrack; you could almost believe both films took place in the same world. What bothers me most about the film though is that there are not as many grey areas to the characters as I thought. ‘The Wire’ was very good at doing this kind of plot, with rather well-developed and well-rounded characters, but in their defence, this is a movie that comes in at just under two hours, whereas ‘The Wire’ was a TV show that had several seasons to develop its cast and its plot. So, the comparison is not entirely fair.

But if I’m to compare it with ‘Sicario’, I think that film was just a bit more interesting and a bit more interested in its subject matter. This one feels more like it’s a character piece, which is fortunate considering that Pete is not a character you’re going to hate. It’s boosted as well by Joel Kinnaman giving an excellent performance in the role, and he’s joined by a very talented all-star cast, including the aforementioned Rosamund Pike, Ana De Armas, Clive Owen, Common; there are a lot of excellent actors in this film.

Where the movie does fall down a bit is the fact that not many of the characters have much to do. This is especially evident when Peter goes to prison. It then goes into a huge element of lots of foreshadowing of events to come, and we all know where this film is heading. It has had way too much of its plot given away in the trailer, and as a result, it feels like everyone’s going to come to this film just for the last portion of it, where the most happens. The one thing the film does very well is emphasising how powerful people at the top are on both sides. The FBI agents, for example, are treated like they could be just as likely to kill Peter to save themselves if the mood struck them, just as much as any of the Polish gangsters. The gangsters do feel like they have a sense of authenticity to them, likely due to the fact that one of the book’s authors was Borge Hellström.

Having said that, ‘The Informer’ doesn’t feel like it’s going to leave an impact like ‘Sicario’ did, rather, it seems like it’s going to be a one and done. I’ve reviewed a lot of thrillers for this website and frankly, this one I think is going to come down as one of the less memorable ones. This is not one of those films that I expect to really remember years from now as one of those films that was a really good day for my job. In fact, at times, it can feel like the film’s just spinning its wheels. In fact, one of the biggest problems I have with the film is that the main crime boss disappears after Pete goes to prison, and his presence doesn’t feel like it’s there in the second half of the film. Most of his actions are performed by underlings after that point. It kind of portrays the FBI agents as the bad guys after that point, and if anything, the drug lord plotline actually feels rather unfulfilled by the end of the movie. Not too much is resolved as a result.   ‘The Informer’ is a film that really aims high with its premise, its concept and its cast, and is somewhat engaging in certain parts but doesn’t quite stick the landing in a few areas. As a result, it feels quite hollow in parts, and some plotlines don’t feel fully realised. As a whole it’s an okay film, just don’t expect it to have the same impact as ‘Sicario’ did. What boosted the film was Joel Kinnaman’s performance, but I doubt that was enough to make this a film I’m going to remember years down the line.

Well, that’s it for another week. Next week I’m back with the sequel to the highest grossing R-rated horror movie of all time, IT: Chapter 2. With all that being said, thanks for reading this review. I hope you enjoyed reading it as much as I enjoyed writing it.
Calvin – Nerd Consultant
Share This Post: