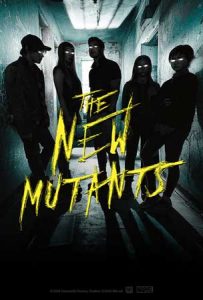 New Mutants has been in terrible production delays – this was supposed to come out before X-Men: Dark Phoenix, but it’s been kicked around the release schedules so much that it looked like it was probably never going to come out. The film finished wrapping up but then there was news that there were going to be re-shoots to fix a few issues with the film, but then those reshoots got cancelled before it was then delayed again because they decided to go back and do the reshoots, but, for whatever reason, after the Disney acquisition of 20th Century Fox it was decided that the reshoots would once again be cancelled and the film would go out as is. Needless to say, it’s been a bit of a back and forth for this film.

The film also goes in with a real issue that this was part of a planned trilogy but the sequels have inevitably been cancelled due to the fact that Disney and more specifically Kevin Feige is expressing interest to bring the X-Men stable of characters into the Marvel Cinematic Universe now that Disney owns them. There’s even a rumour that Deadpool 3 is going to actually merge Deadpool into the Marvel Cinematic Universe because of it. So we’re now at a bit of a problem that a film intended to be a new spin-off franchise has come out but already we know it won’t be getting sequels and is a spin-off to a franchise that no longer exists.

So, now that the question ‘How did we get here?’ has been answered, what is it like now that we’re here? Well, that’s another matter. The New Mutants is basically a film about Danielle Moonstar, played by Blu Hunt, who’s been taken to a hospital facility for mutants which is run by Dr. Reyes, played by Alice Braga, and is housed with fellow other younger mutants, Illyana Rasputin played by Anya Taylor-Joy, Rahne Sinclair played by Maisie Williams, Sam Guthrie played by Charlie Heaton, and Roberto da Costa played by Henry Zaga. And of course, the film suggests there might be a more sinister nature to the hospital they’re currently being held in. No kidding.

New Mutants is a very odd film in several regards. It doesn’t really bear much relation to the comic that spawned it. The film has received accusations of whitewashing since, despite the fact they did mostly get actors of the nationalities that there were representing in the comics, I do agree they do not look like their comic counterparts. It hasn’t helped that director Josh Boone did not respond to the criticism very well on Twitter. I actually think the casting is one of the best parts about the film – the film is actually very well acted, all things considered. It also helps that this film has a very small, insular cast – it gives off the sense of being rather like an indie movie, which again, one of the things that really attracted people to the idea of this film is the idea of it being a horror film set in the X-Men universe. The idea of applying a horror element to a superhero franchise really can be intriguing. Here’s the thing though, we have a few issues on that one, but I’ll go into that in a bit as I want to talk more about the positives of the film.

I’ve only mentioned the acting as a positive, but some designs are pretty cool. They definitely did a good job replicating some of the designs of monsters, and there’s definitely an air of a creepy factor to it. This doesn’t feel like a film that’s been made with no love and care. New Mutants does also do a good job giving a lot of time to its very diverse cast, and it’s very commendable for that. Here’s New Mutants’s biggest problem though: it’s really confused in its identity. As I mentioned, New Mutants was directed by The Fault in Our Stars director Josh Boone, and it’s got a 15 certificate in the UK. Here’s the thing, however: it’s got a PG-13 certificate in America. And I’ve mentioned on several occasions that PG-13 horror does not work; I’ve never seen a PG-13 horror film, to my memory, that really worked. The problem with making a PG-13 horror film is you can’t go all out. I really think this film could have benefitted from going the Deadpool route and making it a rated-R film. It probably would have generated some controversy with the actors involved but it would have had more of an identity.

The thing is though that New Mutants is clearly also made to appeal to the young adult crowd, the casting of Maisie Williams and bringing in The Fault in Our Stars director definitely to that point. And most of this film feels more like a young adult action series – this feels way more Hunger Games or Divergent than it does, say, Pan’s Labyrinth, or even more that than X-Men. There’s obviously very little tie to the X-Men films – there are no real cast members, though the film implies that the facility has some sort of connection with the X-Men at one point in the film. However, obviously anyone with knowledge of the comics will probably have a different perspective on it.

What’s more, Disney really screwed up with this film – they didn’t know how to market this film or who to. It doesn’t really have much superhero stuff in it so you can’t really put it to the superhero crowd, the horror crowd won’t get much out of it because it’s a bit too tame for my liking (there’s only one scene where I think they went all out with it), and I don’t think it’s going to appeal too much to the YA novel crowd since I think most of them would get their fill with something like Hunger Games. Now obviously there is going to be some crossover with the X-Men fandom but I’m not entirely seeing it. The X-Men films, as I’ve stated, have already had a lot of depreciation and this really wouldn’t have helped if it came out before Dark Phoenix. Both films kind of suffer the same problem with being rather uneventful and pretty boring. The horror elements they try to go for don’t really work because there’s no real suspense, there’s no real build-up; things just sort of happen. All the horror scenes are really fast, like there’s nothing drawn out about it. It also doesn’t help that the power sets are not that interesting for these characters.

And we also then suffer with another issue of the special effects. I don’t want to disparage this film too much, but the special effects are rubbish in a lot of scenes. There’s a fight with a big creature towards the end of the film that looks so awful I was amazed that they thought that was good enough. And what’s more, this film has some terrible lighting. I know it’s a horror film so you want it to have a bit of a dark atmosphere, but you don’t make it this dark that you can’t see anything! I haven’t seen scenes this unnecessarily dark since Fantastic Four.

New Mutants is a pretty weird to come out since it’s kind of pointless, and what we got is not a very good movie. It’s very bland and very confused in its identity. It doesn’t know what kind of film it wants to be and is clearly a franchise starter for a franchise that will never exist. The ideas they present here are very interesting, commendable and do a good job of presenting their characters, but the film is really boring at times and it also has the problem of not being able to go all out with horror in order to keep the young adult crowd coming in. But as a result, I think this film is not really going to appeal to anyone. This won’t be like a cult classic down the line; I think this will be very easily forgotten. Like I said, the writing is somewhat decent at times and the acting is pretty good but that’s all the praise I’ve really got for it. It’s really a film that left me drained, with a sense of apathy.
Calvin – Nerd Consultant
Share This Post: