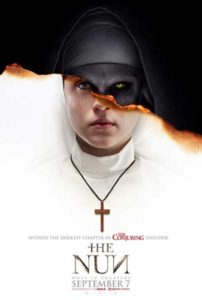 The Nun is the latest film in the Conjuring set of movies, having two main entries and two spin offs with the Annabel films. I have never really been a fan of the Conjuring movies as I’ve commented on this site in the past. I don’t like that they present these as true stories and paint these characters in a positive light. In real life they were little more than con artists. Suffice to say, I’m not a fan.

Conjuring part 2 is so fabricated, and it is a big stretch to say it’s inspired by true stories!

James Wan did put his all into this film and the James Wan films alone are alright, they have their moments, but I still think they are not as great as people make them out to be. A number of them are pretty awful, the original Annabelle is pretty bad, though I am willing to give it some credit. I hear good things about Annabelle Creation but I have not seen this movie and at this point have no real desire to see it.

Long time series creator James Wan does not have a credit on this film and has simply invented the story handing the writing credits to Gary Dauberman, who wrote the last two Annabelle movies. Dauberman also wrote the script for Stephen King’s “IT” movie, which I reviewed last year. Dauberman is also writing the sequel for the “IT” movie, which does have some potential. In the directing chair (for The Nun) is Corin Hardy, the director of the Hollow, which is another film I won’t claim to have seen.

The story line is that a disturbing incident takes place in an Abbey in Rumania. Following this, the Abbey gets the attention of the Vatican which sends in Father Burke, played by Demian Birchir, and sister Irene, played by Taissa Farmiga. Sister Irene has yet to take her final vows. I know this sounds like a weird exposition but they bring that up for a reason. The pair are joined by Frenchie, played by Jonas Bloquet, and that’s not just me being coy: it’s genuinely his name, and an investigation into the incident starts to take place. It soon becomes clear that the Abbey has a presence to it. Anyone who watched the Conjuring 2 remembers the Nun’s creepy painting which led to the nun being one of the main entities of that film (Conjuring 2). Just for the record, there was never any evidence of a nun being part of the Enfield Poltergeist phenomenon. Just throwing that out there. This film was meant to expand on the character and its laws. If you go into this film with that mind set this film is a massive disappointment. For a film that’s supposed to expand on the origins, it does very little that actually touches on the characters’ origins. Now that probably goes against what I have said in the past in that the more you know about an entity the less frightening they are, this is what destroyed remakes like Rob Zombies Halloween remake and Michael Bay’s Nightmare on Elm Street remake. The thing about The Nun and these other films, I would say that this is one of the few times when it would have been better for the creator to go into further detail. From what I’ve heard, Annabelle creation actually does a pretty good job with that character’s origins and it deals with a very similar subject. The thing is though The Nun really is kind of dull as a film. This film has some of the most predictable scares you’ll ever see. There’s a tonne of jump scares and it’s the type that are so choreographed you will see them coming instantly. I actually managed to point at the screen at exactly the right moment when the jump scares were going to happen. It was that predictable. It does make for a really great game!

There are a few creepy ideas here: we rarely see any of the nun’s actual faces as they all look very similar to the titular demonic character, any one of them could be her. The shots are very effective. Irene’s character is genuinely likeable and has good character. In fact, the weak character is Father Burke who is very much designed similar to the lead role in The Exorcist. In fact, he has a very similar character to a few lead roles in the Exorcist. The pair spend a lot of time together and it makes you realise that they are basically stand ins for the Warrens. And it makes you wish you were watching a film about those characters. This film has actually been billed as one of the darker films in the Conjuring franchise, but I have found it to be one of the most tame by comparison. The film is actually very dull when you stop and look at it; not much actually happens. In fact, Frenchie provides the comic relief for the film and is probably the most interesting character, and for a film that is going for a darker tone than predecessors, his presence has brightened the mood. Not exactly the mood they were going for. He’s along for the trip and he discovered the body of the nun who committed suicide. A few plots it does resolve; if you are wondering how the nun got involved with the Enfield Poltergeist thing that does kind of get to an explanation by the end of the film, but it is really damn stupid.

I found this film to be a very well shot but at times it seems to cheat its system. The buried alive scene, for example, which was used in a lot of the trailers is an example of this. I think the film makers knew that this scene was not going to have any presence as it appeared 10 minutes from when it was foreshadowed hence why they stuck it in the trailers. They knew there was actually no chance of scaring any one with it. This is a film that is nominal and tries way too hard and as a result has a very low score on Rotten Tomatoes. I think it’s more of an unremarkable film than a bad film. It certainly doesn’t expand the Conjuring universe, it actually feels more of a filler for a potential part 3. With everything that has been done in this film, there really is nothing to do any more with the characters. The ending certainly puts the kibosh on a lot of it and given how the Conjuring 2 ended, it’s fairly unlikely that you can do any more with the character, which also strengthens the belief that there is going to be a Conjuring part 3 considering they are going to have to introduce new characters and similar spin offs, which further proves the idea that doing a Conjuring cinematic universe is not necessarily the best idea in the world. The Nun is a film that is very ambitious and has some creepy shots in it but is rather lacking in characters and a severe tonal issue. It’s further proof that just because a character is popular it shouldn’t get its own movie. The film may have been slammed rather heavily by the critics, but this is one occasion where I think they have been a bit too harsh. The film is not exactly awful, it’s just very much a dull film rather than a bad film. Ultimately, it will make it a more forgettable entry in the franchise.

Save your money: there are hopefully far better horror films coming out in the next few weeks. So, another entry in the Conjuring down and it’s time for me to move on. Next time, I am going to be looking into a new entry into the classic sci-fi franchise with The Predator. With all that has been said, I hope you’ve enjoyed reading this review as I have enjoyed writing it.