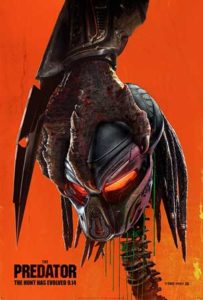 The Predator is the latest in what should be a long line of movies, but The Predator franchise despite its pedigree of being one of the films that help put Arnold Schwarzenegger on the map has surprisingly had fewer entries than you really remember. The series had to entries back in the day, but they largely lagged for quite some time. This was largely due to a lot of rights disputes and getting things in place for the Alien vs Predator films, which as we now know from experience, were not very good movies. The franchise tried a revival in 2010 in a movie that had Adrian Brodie in the lead role, which didn’t really receive too good reviews when it came out, but I was actually a fan of it, though that being said it may have been due to the fact that after the Alien vs Predator films I was looking for just about anything with even a remote resemblance to the classic movies.

Talks of the new Predator films have been through the roof for years and rumours have been spreading for quite a while, it was however later confirmed that a Predator film was going to be productid and in the Director’s chair would be Shane Black, who is well known as a very incredible writer but also for directing in recent memory such as the films: Kiss kiss bang bang, Iron Man 3 and most recently The Nice Guys. I actually enjoyed all three of those movies. Shane Black was also an actor in the original Predator film. Despite the fact I had a lot of confidence in this film, it kind of dwindled when I saw the trailer which looked like it wouldn’t be taking me back to the basics of the Predator film I was hoping for. Never the less I went into the film with an open mind and well… Let’s discuss the film.

The Predator is actually quite confusing in its plot, it seems to act like maybe some of the film has happened, but at the same time it kind of has the sense that it doesn’t know which films have and haven’t happened and there is some sort of history there which we are unaware of. The film follows a Sniper named Quinn McKenna played by Boyd Holbrook who you may recognise from last year’s Logan. During a mission he comes across one of the Predator ships. He is taken in by a government agency lead by Nebraska Williams played by Trevante Rhodes and is placed on a bus of soldiers who have been deemed unfit for combat due to mental health issues. The soldiers include: Traeger played by Sterling K. Brown, Coyle played by Keegan-Michael Key, Baxley played by Thomas Jane, Lynch played by Alfie Allen and Nettles played by Augusto Aguilera. They are also joined by scientist Casey Bracket played by Olivia Munn. They soon realise that the evidence that Quinn had taken of the Predators appearance has now been mailed to his Autistic son Rory, played by Jacob Tremblay, since he couldn’t pay for his PO box and now the Predators are after him. I say the Predators but there is one Predator that has gone rogue for some reason and taken something the other predators want. Now there is a massive uber predator that is going after him, this is the one you see in the trailer.

Ok, here is the fact of the matter, the Predator should have been a very much back to basics film for the franchise. However, it falls down very quickly. See, here’s where the problem lies, I have no clue on what the Predators aspect of the plot is, there is a few things here and there but it is not really elaborated on. Any sort of horror elements this film had are half arsed.

The film phenomenally suffers from an identity crisis since it wants to be a straight up action film. There are tonnes of call backs but they all feel out of place, these include a couple of cringeworthy repeated lines from the original movie, which unless they are said by Arnold Schwarzenegger, they don’t work. What’s more is the film feels like a complete waste.

These actors are all really good, you’ve got a great comedic actor in Keegan-Michael Key who can elevate even the worst scripts that he is given. Sterling K. Brown is always great, Jacob Tremblay despite being in that god awful Smurf sequel, showed a tonne of promise when he was in Room and is actually one of the best performances in the film, who in several scenes can really nail the characteristics of an Autistic child and unlike last year’s Power Rangers they actually stick with that aspect of the character rather than drop it half way through the film. Thomas Jane was amazing in Firefly. That’s this film in a nutshell, it’s tonnes of wasted potential. The script is phenomenally awful, giving nowhere for these characters to go. I suspect there has been several scenes shot and this has been messed about with in editing.

The film is what I would describe as very much a been there, done that, but lost a lot of what it had before. The film at least tries to set up the characters but the position is very painfully obvious and the characters do still do a bunch of stupid stuff they really shouldn’t, that makes no sense whatsoever.

The action scenes are actually very interestingly shot for the most part, but once again there a tonne of plots that are set up, but are never really elaborated on. There is some explanation around the Predators deflection but it is not fully elaborated on, obviously setting up room for a possible sequel, that will probably never happen as I expect this film is going to tank in the box office.

Despite the fact this film does technically have an R rating, it’s not really fully exploited. This is certainly better than the Alien vs Predator films which were rated PG 13 which meant they couldn’t go all out with the gore factor, which was a big part of both franchises. Apart from a few scenes early on it doesn’t feel like they are really going all out with the gore, so much of it is done through digital effects, it’s not exactly what I would call believable. The Mortal Combat games look more realistic than this film.

If you had told me this was a Shane Black film after I had seen it, I would be surprised as there is not a lot of his usual style in this film. In fact, if anything, it feels like this film has been compromised by the studio. Studio interference has certainly ruined films in the past, and it would not surprise me if that had been involved here. What’s more, this film is just dull. It kind of has some funny moments here and there, but the film never really feels like it does its job too well.

Their picture of mental health is not exactly great if I’m honest. It’s not horribly offensive, but it’s borderline there, though I appreciate some of it is used to humanise the characters. Though that being said as I mentioned the character played by Jacob Tremblay is where they mostly get it right, although apparently super sophisticated alien technology that cannot be figured out by the US government’s top scientists, can be figured out by one Autistic child from Oregon, is a bit of a stretch. This plot is actually used later on and when it is, it’s really, really stupid. I believe this films appeal with an Autistic audience will vary from person to person.

The effects are alright, they certainly borrow a lot from the Alien vs Predator movies, which for all their faults, I do think the predator suits were well designed and some of the technology which was put into those films were done well. In this film some of it is carried over. Here’s a tip though, I went to see this film in 3D because of the timing that I went to see it, do NOT see this film in 3D, it is barely noticeable and because most of this film is shot in the dark some scenes are almost impossible to be able to see what’s going on. The darkening effect of the 3D glasses makes these scenes even darker. I keep telling people, 3D works best when there is plenty of light. HOW MANY TIMES HAVE I SAID THIS SINCE I TOOK THIS JOB ON! Even without the 3D darkening effect this film is to dark, like seriously, find an excuse and turn on a light.

The Predator is a prime example of missed potential. What could have been a back to basics for the franchise, ends up falling down miserably. Shane Blacks direction is either half arsed or has been compromised. It is a film that has cringeworthy gags, a terrible script, good cast that feels wasted in their roles and some of the plot points this film takes are incredibly stupid. There are tonnes of plot points that go absolutely nowhere and some that are non-existent.

In all honesty this film is just down right dull. It’s entertaining in parts and some of the action scenes are well done but as a whole this is a film that really doesn’t work. Although I wouldn’t say it’s as awful as some reviews have made it out to be. This isn’t a worst film of the year candidate but it’s a damn shame.

With all that being said, Thanks for reading this review. I hope you’ve enjoyed reading it as much as I’ve enjoyed writing it.
Calvin – Nerd Consultant
Share This Post:

2 comments on “The Predator – Review”