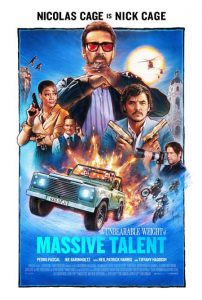 “THE UNBEARABLE WEIGHT OF MASSIVE TALENT” (2022)

All I can say is that I’m so glad I saw the trailer for this film in the cinema because if I saw it on Youtube I would have thought it was a fake movie that had been created as a joke. But no, it is real. Coming to us from director Tom Gormican, who also co-wrote the script, the man has been rather absent from the role of a director, having the very unsuccessful film ‘That Awkward Moment’ starring Zac Efron and Miles Teller before going on to create the series ‘Ghosted’..

This film has been very much promoted to be a Nicholas Cage vehicle, he’s playing himself and it has the tagline of being ‘the most Nick Cage film ever’. He’s playing an exaggerated version of himself in another one of his low moments (must have got in trouble over his taxes again), he’s going through a divorce from a fictional version of his wife, Olivia (played by Sharon Horgan) who is not named after one of his real life 5 wives- yes, Nicholas Cage is on his fifth wife.. He’s having trouble connecting with his teenage daughter, Addy (played by Lily Sheen),  and of course, he’s in a ton of debt with no new roles coming in. His only major offer given by his agent (Neil Patrick Harris) is for him to attend a millionaire super fan’s birthday party; a guy named Javi Gutierrez (Pedro Pascal) on the island of Majorca.

It becomes apparent as soon as Cage arrives that although he and Javi hit it off, Javi is suspected by CIA agents of being the head of a criminal cartel. They ask Nick Cage to go undercover to find out where Javi might be keeping the daughter of a potential political candidate.

This film has done very well with critics, holding a very high 88% on Rotten Tomatoes, and personally, I thought that the film has a decent running plot though I found myself feeling rather apathetic towards the movie. It’s no real surprise that Nick Cage can do these comedic performances, he seems to have realised over the past few years that he is essentially a cartoon character brought to life, and he’s all the better for it- he’s great in the part and seems willing to play it! The biggest plot fallacy I found was that people were getting tired of going to see Nick Cage movies- I can’t think of a time where I would ever get tired of him. At a bare minimum, you’re getting a fabulous mess, and if it’s good, it’s really good!

Unbearable Weight of Massive Talent is sort of the middle, though it leans more towards the brilliant. Something I found surprising was that Pedro Pascal can do a good semi-comical performance as the Nicholas Cage fanboy, but also the fact that he had very good chemistry with Cage. Anyone who has seen him in the Mandalorian will know how good of an actor he is, but I was surprised at how well he does with this kind of performance, this is different to his usual role and I thought that he did a really good job. Here’s hoping he does well in the upcoming TV series of ‘The Last of Us’ playing Joel.

Another thing that I really liked about the film was that it does some decent things with the plot. It’s very predictable, but there is a decent twist part way through that I didn’t see coming. It’s not really a great twist, they don’t leave many clues early on, but it doesn’t derail the plot or contradict previous things in the story. Though I will say that this is a film where you have to suspend your disbelief. I am pleased to see Sharon Horgan of ‘Catastrophe’ fame land a big role in this film. The last time she was in a major Hollywood film was for ‘Game Night’ which wasn’t very good, I actually forgot it existed until I had to look up her filmography for this review. She’s clearly trying to break America and I hope with the help of this film that she gets there, because I think that she’s a great comedic actress. Though in this film she seems to be playing the straight woman role to the mad elements surrounding her.

Another good point is that the film has very well shot action scenes. They all do pretty good and a couple of them make reference to other Nick Cage films. People expecting this to be an all-action film may be surprised as to how few action sequences there are in this.

We have to talk about the Nick Cage references. There’s a lot in here. I was surprised how many they actually managed to get footage of considering licensing deals involved etc.. Of course, any characters now owned by Disney don’t get a feature. We won’t be hearing about how Cage played Ghost Rider or about his role in the Sorcerer’s Apprentice (I bet half of you forgot that film existed).

This also leads into another thing about this film that doesn’t really do it for me, I’m really not a big fan of meta comedies. I always think fourth-wall breaking humour needs to be done quite sparingly. It also takes a really long time to pick up on the madness! If anything, it feels like a film that’s rushing to get to the third act. Cage and Pascal are constantly describing the film’s plot, since Javi is writing a screenplay that he wants Cage to star in, the joke is that they are writing what’s happening to them at the moment.

I felt like this joke worked for a bit but then it went a little too far. The bizarreness of it all is turned up to 11 just a few too many times. There’s a point with Cage is having conversations with a younger version of himself, symbolising him not being able to let go of his past. It really goes to some bizarre places, including one sequence which I would have said is the height of self indulgence if Michael Fassbender hadn’t done the exact same thing and it wasn’t done for laughs.

I also found myself surprisingly uninterested in many moments.. This film really takes a while to kick in, and it’s also not a film where I found myself laughing a lot. There’s a lot of jokes, but I saw a lot of the moments coming so the gags didn’t really hit as well as they could for me, and of course a lot of the best parts were put in the trailer, so this film benefits from you not seeing much about it beforehand.

The Unbearable Weight of Massive Talent is a good film, but I don’t think that it’s a great film like many have said. There’s a few moments that don’t quite work for me and a few gags that fall a bit flat. But everyone knows what film they’re in and as a result it kind of works for the most part! I was kind of apathetic towards this film but on a technical level it works well.

If you like Nicholas Cage movies, this is a must see. But if you’re not really a fan of his, this isn’t going to change your mind.
Calvin – Nerd Consultant
Share This Post: