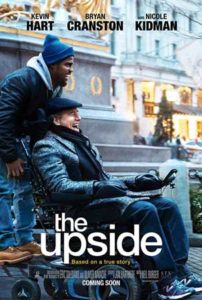 The Upside if a rather interesting film altogether which has been advertised as based on a true story which has not been entirely accurate. It is technically based on a true story but is also a remake of a French motion picture Les Entouchables, which I imagine this story was much closer to the real-life story of a French quadriplegic man who was looked after by a man from the French Guinea. This American remake has been directed by Neil Burger, director of Limitless as well as the first Divergent movie and if you have checked out my past reviews you will know I am not a fan of Divergent movies, including the first one. Needless to say, though the upside certainly had an interesting premise but its release at this time of year suggested that as this was a film both in America and the UK to me suggested that this film was probably buried as this wasn’t going to win any Oscars. My prediction was profoundly correct.

The difference between this and the French film is that it is set in New York and is about a rich quadriplegic business owner played by Bryan Cranston wo is being looked after by a former ex-con who is just out of prison who accidently walks into the wrong job interview and is hired and is played by Kevin Heart, the film from there on is more about the two of them learning something from one another and re-building their torn lives, yet is about as predictable as a film gets, if you are going to this film for any surprises say goodbye to them, it is about as formulaic as you think it is. It is based on an inspiring story but really at the end of the day you have to take this as a work of fiction since again this is more meant to be an adaptation of the French film.

The film itself has quite a few different highlights such as Kevin Heart’s character fixing the wheelchair to make it go faster, while there is a sub plot surrounding him wanting to be a better father for his son to ensure that he doesn’t end up in prison like he did. There may have been a sub plot around one of Kevin Heart’s friends possibly leading his down the wrong path but there is only really one scene for it, and it is dropped from the film really quickly, that being said however it is not incredibly well thought out and that is what most of this film’s biggest problem is. Most of it is not well thought out, some ideas are damn decent but the whole film seems rather half arsed in a lot of areas, particularly with the business associate played by Nicole Kidman who no offense to Nicole, she does a very good job her character is written poorly, she is the most stark character is the whole film and her half of her plot feels like it has been missing.

The film is also phenomenally short, and I really noticed much of the film was in the trailer. The biggest thing that seemed to be omitted was the use of music as a thematically which is a shame because that is actually one of the better parts of the film. Nezam Dorma is played regularly as well with a few different with a few different operas as Bryan Cranston’s part is a fan of opera as well as the use of music by Aretha Franklin who is Kevin Heart’s character’s favourite artist, culminating in a very musical piece end of the film. On the one hand I am actually kind of glad since I think trailers are now showing too much of the films and this film was a prime example there was very little that was not from the trailer. Okay, that being said if you don’t want a film that is going to make too much this film is pretty good all things considered.

I actually found Kevin Herat and Bryan Cranston to have very good chemistry on screen and their dialogue is actually genuinely quite funny. Kevin Heart also surprised greatly in the performance category. I have made it very clear that I am not a Kevin Heart fan, but this is one of his best performances to date, he really gets a chance to show a lot of range which he has not previously had an I hope that he carries that into future roles, although how many he will get is rather dependent given the controversy surrounding his removal as a host from the Oscars which we won’t get into for the purpose of this review. The controversy we will get into very briefly is the casting of Bryan Cranston as a quadriplegic man, something I didn’t actually know about until I saw it was trending on twitter just before I sent to see the film. Now personally I didn’t actually see a problem with Bryan Cranston playing the role since in acting you are meant to play someone else but considering Cranston’s method acting he really does bring a decent part to the role. I think the controversy over his casting has been rather overblown though I suspect it was done for name recognition value. He does give a very good performance and I remember seeing a review that said it must be very interesting for a very physical actor like Bryan Cranston to be place into a role where he can’t actually do any physical movement, this is it though he really is showing what he can do with being very limited in what he can and can’t do in his performance.

The film is also excellent in its cinema topography and its place of locations. The film shows an excellent job of showing the disparage of New York as a whole showing both the side that the tourists get to see and the side of New York which is rather troubling. It is admittedly rather simplistically done but is not inaccurate.

The upside is that is a very short review for me this week is that it is a film that feels very simplistic, the film is simplistic which is its biggest problem. There really is no surprise to it is your very typical feel good film about two very different people taking life lessons from one another. Don’t go into it expecting anything less it is as formulaic as they come, however it is not a film I was bored by and I actually found parts of it very, very funny, Kevin Heart and Bryan Cranston give excellent performances and except for a few hiccups it is generally a likeable film. I think critics have been rather over sceptical of the film however it doesn’t change the fact that I think this film is going to be a bit of a footnote by the time it gets to the end of 2019.
Well that’s it from me this week, next week I’m going back to M Night Shymalan of all people and I am going review Glass. All that being said thanks for reading this review and I hope that you enjoyed reading it as much as I enjoyed writing it.
Calvin – Nerd Consultant
Share This Post: