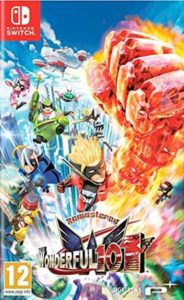 Platinum games have finally managed to bring over their Wii U classic to new systems so that it’s on a console that’s owned by more than Nintendo fans and a couple of their mates. Seriously I only personally know 2 people who owned a Wii U that’s how bad it sold. Wonderful 101 was one of the really good exclusives on the Wii U and was heavily speculated to come to Switch for some time, especially given that developer Platinum Games have practically been working with Nintendo on an almost exclusive basis since Bayonetta 2.

Wonderful 101 was going to be remastered for the Switch with Nintendo even volunteering to fund the project. However Platinum Games refused because the deal would have the PS4 and PC versions scrapped and took the project to Kickstarter. Ok this to me is a bad deal for gamers in my opinion, for one thing majority of the audience for this game is people who own the Switch and I don’t see many PS4 or PC owners being interested (in fact most of the advertising I’ve seen has only advertised the Switch version) so as a result gamers are expected to foot the bill for a game that could have been easily funded by a multi million dollar company which whatever you think about console exclusives(I’m very much in favour of them) doesn’t make the company look good. It’s an indictment of the industry that majority of video game kick starters are not to aid indie developers get their passion projects of the ground and now act more like pre order bonuses that puts pressure on the consumer but that’s a discussion for another day. I’m happy it’s open for more people but I really think vast majority of people buying this game will be getting the Switch version and I don’t imagine it will sell well on PS4 (PC is another matter) also at time of this review this game is only available digitally through Nintendo’s eshop, the Playstion store and apparently is avible for the PC but I was unable to find it on Steam. A physical release was planned but had to be delayed due to Coronavirus to July. If you weren’t one of the few that bought a Wii U and Wonderfull 101 it’s Platinum games take on Super Sentai or Power Rangers as we know it. you take control of up to 100 small heroes fighting aliens determined to end the human race in a over the top hack and slash. This game has been divisive for several reasons and your going to find this game either challenging or if you’re like me really unbelievably difficult. I didn’t play the original wonderful 101 but after trying it out on switch I think it belonged on the Wii U and isn’t really something I enjoyed. The main feeling I had playing was frustration playing this game everything was just really all over the place with it’s controls and it doesn’t help that not much of the game was updated to accommodate the single screen. Platinum Games are known for being challenging but Wonderful 101’s combat seems actively designed to aggravate. The whole time I was playing it seemed like I was only succeeding from luck and that the game was not good at communicating how I was supposed to approach both the level structure and combat.

Caddicarus has his unpopular opinions and I think this will be one I’ll add as one of mine in the comments section when he next does it because I don’t like this game. I’m sorry guys I’ve heard for years that Wonderfull 101 was a gem of the Wii U and maybe that original Wii U game was amazing because I really didn’t have a good time playing it with level design, camera and espically controls I couldn’t put up with and this was a chore to play for me with controls. im certain someone can get something out of it but it’s just not to my taste. I didn’t like and I don’t recommend it unless you played the original game and want to experience it again and I think if you can get the PC version that’d be your best bet

It’s about £30 now so I’d say if you’re curious get it in a sale
Calvin – Nerd Consultant
Share This Post: