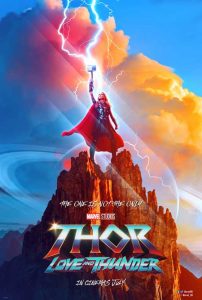 Taiki Waititi returns to direct the newest entry in the Thor franchise, which now marks the first time that a Thor movie has had a returning director. I was really pleased to hear that Waititi was going to return to direct, since Thor: Ragnarok was one of my favourite films prior to this. I thought that he brought something to the project that previous directors hadn’t been able to. Thor is one of the only major Avengers to not really get a send-off in Avengers: Endgame. Though that being said, it did feel like the Russo brothers had finished his character arc at the end of the movie- so I wondered what was planned for this one, especially considering that Natalie Portman was returning to reprise her role as Jane Foster a.k.a The Mighty Thor.

I personally thought that it was a good idea to bring in Portman again, her presence has definitely felt missing in the MCU over time. I thought that it would be interesting to bring this part of Marvel’s history to the forefront, though I also wondered how much bad faith criticism was going to show up online from people who didn’t realise that Jane Foster as Thor was something right out of the comics.

The plot line of the film mostly revolves around Thor (Chris Hemsworth) alongside Korg (Taika Waititi) and the Guardians of the Galaxy after they get a distress call from King Valkyrie (Tessa Thompson). They return to New Asgard to find that many of the Asgardian children have been kidnapped by Gorr the God Butcher (Christian Bale). They receive help from the new Mighty Thor (Natalie Portman) who has managed to re-join Mjolnir in the hopes that it would give her the power to save her from cancer.

I’m going to stress this very potently: I really, really liked Thor: Love and Thunder. In fact, at this point it may be my favourite Thor movie. That’s not to say it’s perfect, while there is an attempt to give Gorr a believable motivation, I do get a sense that a lot of his backstory and character were left on the cutting room floor- I wouldn’t be surprised if there was an extended cut that had more for the character. I think Bale gives an excellent performance in this morale, and the effects do him well. They actually make his character very frightening at times.

One aspect that I think this film did very well at was the core relationship between Thor and Jane Foster, especially considering that she gets a pretty proactive role this time around. I was surprised that the main character role is kind of split between them, I thought considering that Marvel is moving into a new phase of their films that they would want to put Portman front and centre, but while she doesn’t take a back seat to Hemsworth (who proves that he is born to play this role), she certainly isn’t as much at the front as I expected her to be. That being said, they did an excellent job with her character arc. Her attempts to find anything that can help deal with her stage 4 cancer.

I will stress that I did read the comics for this character, but not for this movie. I did it for Thor: Secret Wars 2015 since I believed that the character was going to take a very big role in that event (spoiler alert, she doesn’t really, in fact no one really does except for the Fantastic Four. the more I think about that event comic, the worse it gets). I think that this film does a better job with the character than the comics did! I think Waititi did something the comic writers never did- they looked at the characters and then looked at what story they could tell, whereas in the comics it feels like they focus so much on the character that they have no idea what kind of story they want to tell. I remember the comic series not really having many engaging storylines- especially considering that they went on for ages before revealing that Jane Foster was Thor.

I think that putting Jane and Thor’s love story at the forefront of the film was a very good choice. It reminded me a lot of the comic Thor: The Mighty Avenger, which I recommend checking out. Out of all of the MCU films I felt like this one was the only one closest to the comics in many ways. It actually feels rather weird considering how much the MCU films do their own thing.

Waititi brings his tone and directing style to these films really well, we see that with a repeat of the thespians gag again, with another funny cameo in there. Including one cameo later on in the film that introduces another character that I really got a chuckle out of. The humour in this film is very good! It does edge into being overpowering and some of the gags don’t completely work, like Storm breaker being jealous of Mjolnir. I especially liked some of the earlier stuff with Guardians of the Galaxy, it really makes me want to rush Marvel and James Gunn into making GotG 3 later, especially considering that all of his DC projects have been shelved.

I also felt that the film did a very good job with the action scenes. There’s not too many this time around, but they do work very well. It also does a very good job shooting scenes in dark environments, something that I’ve noticed a lot of recent films are struggling to do.

I did, however, think the film came to a hasty resolution. It does feel like the film speeds up too much during the last portion of the movie, but as a whole, it’s decently passed. The soundtrack is really good! Waititi is very clearly a huge Guns n Roses fan, one of the main child actors even names himself after Axel Rose. but no one tell Axel Rose that; he doesn’t need anything more to inflate his ego.

I have heard some complaints about the new costume for both Thor’s in this movie. I think Thor getting the brighter costume this time around is to make sure he has a more distinct colour scheme than Portman’s Mighty Thor. The Mighty Thor costume is more accurate to Marvel’s original costume design, and I think that they wanted the two to be more distinct so that it didn’t seem that Jane was cosplaying. The original Thor costume, while not terrible, I think that the bright colours don’t entirely suit a character like Thor. They went more over to the blue side than silver this time.

If it sounds like I’m being a bit too nit-picky, it’s because I’m trying to be fair about this film! I really came out of the cinema gushing about this film. The one thing that this film has in spades is heart. It feels like everyone is giving their all in this film, and there really is a core to the film that I think really benefits the overall movie. It feels like a passion project. And while the ending does raise a few questions about the future of many characters, it really does feel like a nice bookend. I don’t think that there will be a fifth Thor film, and I think that that’s fine.

Thor: Love and Thunder has great humour and great character moments and a great (if not slightly underdeveloped) villain. If you liked Ragnarok, I think you’re getting a lot more of the same good stuff this time around, though I think that this film is superior to that one.

Is it the best Thor movie to date? I think that many people will stand by Ragnarok, but I’m going to say that I think Love and Thunder takes more bold risks and has a better concept. Overall, it’s a really good movie, and I think it’s really worth checking out. I would recommend sticking around for the mid credit and post credit scenes, particularly the mid- I’m wondering how that is going to affect future movies.
Calvin – Nerd Consultant
Share This Post: