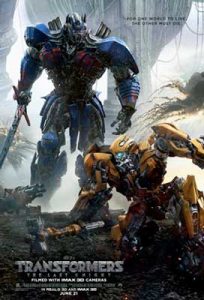 Apologies if this is a short review, but I really don’t have much to say at all!!

Seriously, we are five movies in at this point, five movies in. I’ve explained why I don’t like the Transformers films, I have explained I don’t like Michael Bay as a director and how he is just completely destroying everything and I have nothing more to say. I HAVE NOTHING AT THIS POINT, I don’t even want to attempt to criticise this film because he is not attempting to make anything, it’s all just testosterone filled nothingness that’s been all of these films to date.

Transformers The Last Knight’s only real contribution is that it now adds King Arthur and Arthurian Legends into the Transformers Universe, but frankly it’s rather meaningless since it all comes down to, this is the plot device for this film, bad guys want it, good guys need to protect it. The only thing that is added is some sort of weird Dragon Transformer, which thanks to the terrible special effects and over reliance on CGI looks just as fake as everything else. Every single moment of this film is just loud, obnoxious and frankly rather dull. There’s nothing enjoyable about it. The jokes aren’t funny, the plot is all over the place and has everything explained to you every five minutes because it’s forgotten the first rule of cinema, which is, show, don’t tell. It’s just blindingly dull in every sense of the word.

The characters, there are no characters! This isn’t a fleshed out universe, they are only there to get to the action scenes, and here I was thinking the reason the Marvel movies are successful is because they actually give meaning to the action scenes by building up decent characters and while I am on it, once again, there is no room to breathe, it’s just one action scene to another.

The plot, which I have been rather ignoring is about Cybertrom coming to the planet and there is some Transformer god that corrupts Optimus Prime because they have got to rip off that idea from Fast and Furious 8, which was done much better there because at least they actually gave a decent reason for why Don was betraying the group and while it was stupid there, at least they attempted to do something with it. This film on the other hand, just has it sorted in five minutes! Hope you fan boys enjoyed your fight scene between Optimus Prime and Bumblebee, because that was the only thing that was accomplished.

There is one thing I will say in this films favour over Age over Extinction, this film at least felt like it accomplished something, and while I am at it, for some bizarre reason, the military are now anti-Transformers and go after the Auto Box as well, which makes no sense at all considering how many times he has died to save the plantet, but when was logic ever in these films, and then they do a deal with the Septicoms, makes total sense to me!!!!!

Not to mention Anthony Hopkins is giving one of the worst performances I have seen in his entire career. He thinks he is acting real cool, when actually he is just infuriating and annoying, like every other character in this film. What’s annoying as well is this film has the nerve to rip-off lines from much better films and TV shows. Ok, granted, the Wrath of Khan reference was at least meant for parody, even though it doesn’t work at all and butchers the line and the whole meaning behind it, and means that a character death has been played for laughs, thank you very much Michael Bay and then it has the nerve to rip-off a line from Sherlock and act like it’s their own original thing, and I don’t mean they do a slight line rather similar to it, it is word for word from Benedict Cumberbatch’s mouth, he’s not even in this movie!!! He’s not even a key reference!! What’s more, I don’t often say that this thing cuts off the stereotypes, but the British stereotypes in this film so appalling!! I mean it, they are just all over the place. Mark Wahlberg is somewhat memorable, but he is even memorable in terrible films but for the love of god man, don’t do any more of these!!

There is also the fact of the matter that it’s more of the same, that’s all this film is, it’s more of the same. There is not attempt to improve this, there is no attempt to listen to the critics, there is no attempt to be anything other than what they were, loud, obnoxious, wastes of time and after I had done it, I felt physically and emotionally drained and seriously considered not going to the cinema for a long time! I felt I wasn’t actually able to do my job, that’s how terrible this was. It annoys me that this is a franchise that people are still going to, it annoyed me that there were more people in my cinema than there were when I went to see Mad Max Fury Road and it annoyed me that there are some people who are buying into this. For the love of god, if you paid to go and see this at the cinema, then frankly, you are giving your brain the equivalent of junk food. Michael Bay and the Transformers films don’t even care!! I know a lot of people are going to say, ‘of, it’s a Michael Bay film, it’s not supposed to be good’, yes that’s the equivalent of saying it’s an incomplete game, it’s not supposed to be fun or it’s a badly cooked dish, it’s not supposed to taste good. It doesn’t change the fact that it is a bad film and it makes me feel cynical and annoyed.

I HATE THESE MOVIES, I AM SICK OF THEM AND I MAY DECIDE TO NOT BE PROFESSIONAL AND NOT EVEN REVIEW ANY OF THE THREE FUTURE PLANNED FILMS.

So that is why I have ditched my usual formula, because this film isn’t worth the formula. There is no point critically analysing this, you know this film sucks, we all know that I am going to think this film sucks, what’s the point!!!

Oh, and by the way, don’t see this film in 3D like I did. Most of the scenes are so in focus that it reeks of a rushed conversion job, I actually took off my glasses several times and the film was largely in focus. It reeks of Priest’s 2 ½D Con Job This movie sucks.

Well, it’s time to calm my nerves. Next time I will be giving my thoughts on In This Corner of the World, the latest Anime to receive a theatrical use in the UK.