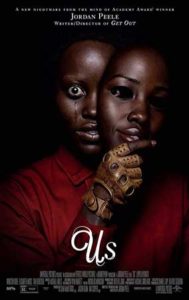 Us is the latest film from Writer/Director Jordan Peele whose previous film “Get Out”, I reviewed very favourably. But at that time, I wasn’t anticipating the levels of success that Jordan Peel was going to receive from the film, not only was it a box office hit, but it also managed to gain several Oscar nominations including Best Director, Best Actor and Best Picture. It sadly failed to win any of those awards which was even more annoying as out of all the films nominated that year, “Get Out” was my favourite of the bunch, but it was nice to see the recognition there. (P.S. I am aware that the Oscars have become a complete joke by its nomination process, but if you are going to buy into it, I am at least going to say that the film deserves to have won it).

Now the thing that surprised me is the fact that Jordan Peele has come up with his follow up film after just 2 years, I suspected that we would be waiting a bit longer but fortunately he seems to have brought out another film through his production company “Monkey Paw Studios”, though from the outset and the advertising campaign, it would appear that Jordan Peele is aiming for this to be a slightly more ambitious film than “Get Out”.

Now the plot of “Us” has quite a lot going on in it, as a result this review might be a bit shorter than usual since I don’t want to go into too much detail about the film, even more so than usual for fear of spoilers. If you have seen the trailers for this film then you know the basic plot. A family going on vacation to a vacation house when they are confronted outside the house one night by another family who are their doppelgangers and the film then turns into a home invasion film. This is really all I’m going to say about the film because to go into any more detail would completely ruin some of the best parts about this film.

The thing is though, this film has a lot going on, but it’s also trying to do quite a lot in a short space of time, and I don’t mean in terms of the run time. The beginning of the film seems to want to throw tonnes of things in your face all at once, then it includes an opening text box, which doesn’t really seem to talk about anything, a flashback sequence and the general set up of the storyline. On a lot of levels, it’s very weird film, but as a horror film it really works, it’s not incredibly scary, per se, you’re not exactly going to be scared of this film, but it’s definitely an effective film. The film holds your attention constantly trying to figure out everything that is going on and Jordan Peele writes a very good script for the film, the writing is the real strong point of the film. Also, I have to give real credit to the acting, including a brilliant dual performance by Lupita Nyong’o and Winston Duke, who you might recognise from the film “Black Panther”. The kid actors are actually pretty good as well, there’s an excellent performance by Shahadi Wright Joseph and Evan Alex, who actually takes to the script a lot better than I was expecting him to. You initially think Evan Alex’s character is going to be the typical creepy kid persona that horror films have judging from trailers and the fact that he walks around with a Halloween mask on half of the time and they kind of do that, but that’s the thing, each of the four main actors have to play dual roles and it’s very interesting as far as an acting class goes, I suspect many of the performances in the film may get nominated at the coming award season as it seems to be the kind of thing that the academy seems to like.

Now Jordan Peele’s inspiration in this film seems to be around a home invasion theme, which seem to be getting in short supply I’m noticing in recent memory. these days. He does a really good job of it, the sheer concept works very well but it is also done with a very knowing tongue in cheek take for fans of horror films, but not to the same extent of a full blown comedy and there is definitely a lot to read into it. Without going into too much detail about it there is a lot of social commentary in the film as well. To me, it reminded me a lot of films that are directed by people like Wes Craven and George Camero. Some of the references might not do so well with an international audience. I don’t know how many people remember some of the historical events as referenced early on in the film. The only reason I knew about it is because they referenced it in a Simpson’s episode and I might have thought it was a made up thing for the film, if I didn’t know otherwise.

As mentioned, Jordan Peele’s direction makes these scenes very, very effective, the man knows how to do these sorts of films and do them well, but again, he knows horror is on some level inherently kind of ridiculous and he plays to it, some of the dialogue in the film is really rather funny. As much as I was a glued to the screen and invested in all the different turns the film was taking, a scene involving an Alexa knock off, because they couldn’t get the rights to the product placement was one of the funniest things I’ve seen all year, I was pissing myself laughing!

Now I could go on and on and on and on about the themes of these films and all the individual little bits and bobs, but I’d have to spoil the review for that and I may come back and do that when this film comes out on DVD, though I don’t make any promises on that. But trust me, this is one film that really has great characters, a great plot and does some really cool and effective horror and it also has tonnes of twists and turns. That is where one of my problems lie with the film too, some of the twists leave a few more questions than they do answers, but I’m sure someone will point out why they’re not questions. This is one of those films that is going to warrant a few viewings, you’re not going to get everything on the first viewing but I would like it noted that I correctly guessed the final twist very early on and even then I was starting to question my deduction part way through the film though sticking to my guns did pay off and it did not erode the film. Guessing that twist successfully doesn’t make you guess half of everything else that happens in the film nor does it diminish your enjoyment.

However, compared to Get Out, I think Us is the weaker film by a bit, the script just isn’t quite as tight or fit together and trying to be a slightly more complicated plot, it doesn’t quite work as well as Get Out’s rather simple plot which I imagined stemmed from the conversation of what’s the scariest thing for someone to do – meet the in-laws for the first time. That’s not a detraction against Us, I think it’s definitely a film you need to check out because Jordan Peele is on a roll right now, Us is a film that really sold me its plot, direction and even its performances, even though I think Lupita Nyong’o’s performance as an alternative side drew a few more laughs when she first appeared on screen than scares for the voice, which I’m not sure was intentional, but luckily the film recovers and she does deliver probably the best performance in the film. It is a film that will really warrant repeat viewings to be able to figure everything out and to really absorb it, but I really recommend watching it now as it will really enhance your viewing for when it comes out on DVD and Netflix. If you really like good horror films then this is definitely one to check out and you liked Get Out then this film proves that Jordan Peele’s success on that was not a one-time thing. Really see this one!

Well next week I will be back to more family friendly content when I will be reviewing the first of three live action Disney remakes coming out this year with Tim Burton’s “Dumbo”.

With that being said, I hope you have enjoyed reading it as much as I have enjoyed writing it.
Calvin – Nerd Consultant
Share This Post: