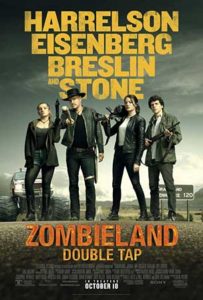 Zombieland: Double Tap is the very belated sequel to 2009’s Zombieland, and reunites the core cast of Woody Harrelson, Jesse Eisenberg, Emma Stone and Abigail Breslin, alongside director Ruben Fleischer. A Zombieland sequel was considered in development for quite some time, but it took a really long time before it was actually going to be greenlit.

And, there’s the first problem going in. It’s been 10 years since Zombieland, and the cast has moved on and done a lot since. Eisenberg and Stone, for example, have both been nominated for Oscars, while Woody Harrelson has been nominated twice. It begs the question, “What’s the point of bringing it back?” The first Zombieland is an alright film but it’s not a film where I go, “I’m in desperate need of a continuation.” Nevertheless, it’s here, so let’s see what they gave us.

Well, Zombieland: Double Tap’s plot is basically that, after a while of living in the White House, Tallahassee, Columbus, Wichita and Little Rock, played once again by the same main cast, hit a bump. As a result, Wichita and Little Rock leave. Again. And then Little Rock also leaves her with her new boyfriend named Berkeley, played by Avan Jogia, with the destination being Graceland. Wichita, with nothing else left to do, goes back to meet up with Tallahassee and Columbus in the hopes of asking them to help bring Little Rock back. If you like many people I spoke to thought that Zombieland was going to be a big nostalgia-bait, then congratulations, you’re right. It borrows a ton of plot beats from the previous one. Tallahassee, for example, has gone from idolizing Bill Murray to idolizing Elvis, hence the whole reason that Graceland is mentioned in this film quite a bit.

The biggest difference this time round is the introduction of new character, Maddison, played by Zoey Deutch, as well as Nirvana, played by Rosario Dawson, who I swear is going for the record of trying to appear in as many franchises as possible. The problem with Maddison is that the joke of her being a ditsy girl is quite funny at first but gets old quite fast. I think the director knew that which is why she’s not in as much of the film as you’d expect from the trailer. Nevada, on the other hand, is actually an interesting edition, though again, her role is regulated to be a glorified cameo. Rosario Dawson’s not in this film much either. In fact, the film doesn’t really take much focus away from the main four.

The banter between the characters is still pretty good for the most part, though once again, it appears almost identical to that of the original. As a result, nothing about this movie feels very enthusiastic; it feels like a film that’s just going through the motions. The script basically foreshadows virtually everything that happens, to such an extent that you will almost certainly know what’s going to happen and when, but it’s not as if this isn’t indicative of a lot of films coming out right now. They also haven’t really expanded much on the film’s universe (for the lack of a better term because, of course, everything is a cinematic universe now, and Marvel’s been the only one to get it right). Admittedly, this time it’s a slightly different species of zombie, which only really makes a difference for about one or two fight scenes as a whole, it doesn’t really make much of a difference overall except that they’re now named either a Homer, a Hawking or a T-800. Oh, and a Ninja as well, but I think they were used for only two scenes at most.

Zombieland: Double Tap frankly overall does remind me quite heavily of a lot of sequels which just redo the first film but change the setting, The Hangover: Part 2 being one of the most infamous offenders in recent memory. But, fortunately, it’s not nearly as lazy as that film was. The scriptwriting is at least still competent, and when the banter’s good, it is pretty good – I did find myself laughing a fair few occasions. And I wasn’t bored; this isn’t a film whereby you’re going to leave the cinema thinking, ‘I’ve wasted my entire time when I could have been doing something way better.’ And the performances of the actors, while a bit toned down compared to the first one, are still pretty good. Woody Harrelson, once again, steals the entire show.

So, we’re now in a position where we simply have a film where it almost seems like everyone’s going, “Remember the first film? Yeah, we’re going to try and replicate that again.” This is ultimately the movie’s biggest downfall. As a result, Zombieland 2 is ultimately what the first was not, passable and disposable. Zombieland: Double Tap is a decent film with some good effects and some decent writing, but it’s a lot less innovative and clever compared to its previous entry. You’re left with something where you’re simply going,

“Well, that was alright but I’m not sure I’d want to see it again.”

If you liked the first one, this is more of the same, so make your judgement about seeing it on that basis, but don’t go in expecting anything too different. And I know I’m making it sound like I didn’t like this film, but it’s more that I thought it was okay. Just okay.
Well, that’s it for another week from me. I’ll be back next week reviewing Terminator: Dark Fate. With all that being said, thanks for reading this review. I hope you enjoyed reading it as much as I enjoyed writing it.
Calvin – Nerd Consultant
Share This Post: