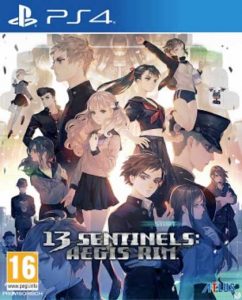 (Available for PlayStation 4 only)

Atlus might make some great games but they suck at localising their games to the west. The Persona games still come out half a year after their Japanese releases in spite of the fact of how quickly localisation can happen these days with a bit of effort and it doesn’t appear like it’s set to change with Persona 5 Scramble still without a release date in the west at this time and the remaster of Shin Megami Tensei 3: Nocturne is coming to the Switch several months after Japan, though it has been confirmed that Shin Megami Tensei 5 will have a simultaneous worldwide release (though I suspect that’s due to Nintendo publishing that game. 13 Sentinels: Aegis Rim is also part of this trend releasing in Japan in November of 2019 and only releasing recently just over 10 months after the Japanese release and which is being developed by Vanillaware and published by Atlus and has had not too much of a marketing push (I wasn’t actually aware the game was coming out until after I saw reviews for the game on YouTube after i’s release). It is now here and I was eager to try it out. the game is a sort of hybrid of both a narrative game similar to a point and click or visual novel style game and a tactical Mech game. you’d be surprised how much those 2 go together but they do with you advancing the stories of 13 characters with tactical Mech battles in between. The way the story structure reminds me a lot of Octopath Traveler though in this case you will have to advance certain characters before you can access more than others to avoid spoilers for other characters plotline. The story centres around 13 young people defending Tokyo in 1985 from a Kaiju invasion using the power of Mechs whilst dealing with plotlines involving personal struggle, conspiracy theories, time travel and a possible apocalypse. As usual for a game published by Atlus and developed by Vanillaware it’s very Anime in tone and look but even if that isn’t your thing I’d urge you to not be put off by it since publisher Atlus does a very good job bridging the gap between telling a good Anime style plot with good gameplay and this is no exception.

13 Sentinels has one of the best stories in a video game in 2020 and creates a game which is incredibly fun to experience it. It probably could’ve scored more if it wasn’t for the difficulty spikes or the story structure issues but as it stands it is great that this game is finally available outside of Japan because it’s truly an excellent exclusive for the PlayStation 4 in its final year of being Sony’s primary console. If you like really good sci-fi you really should play this and if the gameplay of the mech battles aren’t for you , which I seem to be reviewing more favourably than most people, just go to casual difficulty and experience the story. it looks, great and plays really well so would recommend picking it up

Absolutely recommend buying it even if you are planning to upgrade to the PlayStation 5 since it will be backwards compatible though I suspect it won’t be one of the games to get the upgrade when playing on that console and is also an excellent pickup if you are staying on PlayStation 4 for the time being. PC gamers I would suggest keeping an eye out since I can see this going to Steam or Epic Games Store in the future.
Calvin – Nerd Consultant
Share This Post: