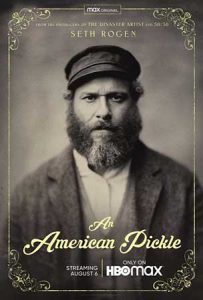 The feature-length directorial debut for long-time cinematographer Brandon Trust and written by Simon Rich based on his own short story, An American Pickle was an HBO Max film which happens to be getting a theatrical release as well with select cinemas. And it does have its big selling point of its main star Seth Rogen, with a lot of emphasis being placed on the fact that Seth Rogen is playing dual roles within this film. Now, this film feels like a bit of a strange one to have one actor playing multiple roles in this way. It’s being done very similarly to the film Legend which had Tom Hardy play both of the Kray Twins. But there are a few big differences this time, the major one being that this film’s a comedy so it can work with the ridiculousness of it, but I really wanted to see how this film would turn out. Plus, it was one of the few big new releases that are in cinemas at the minute so I thought I would take a chance on it.

The film is based on a 19th century pickle factory worker Herschel Greenbaum played by Seth Rogen who, after immigrating to America with his wife Sarah played by Sarah Snook, falls into a pickle brine and is perfectly preserved in it for 100 years (don’t ask – the film never addresses the science behind it and just waves it away after it’s first brought up), and is sent to live with his only living relative, his great-grandson Ben, also played by Seth Rogen. The film then chronicles Herschel’s desire to repurchase the family cemetery plot after a Russian vodka billboard advert that is hung above it—trust me, it’s offensive because of the Russian occupation of Eastern Europe at the time—and Ben gets into a fight with him after his app that he’s designed isn’t getting investors, and Herschel, to prove him wrong, starts a pickle business which takes off and sends the two into conflict.

This film is definitely an absurdist comedy which you can tell from that premise, but it also tries to have a bit of heart. It’s somewhat commendable – they introduce the fact about Ben being rather distant from his Jewish heritage and the fact that he’s having trouble grieving for his parents, but it actually creates another problem. When this thing decides to be an absurdist comedy, it can feel really tonally off; this film has a real tone issue. That being said, some of the absurdist stuff actually makes some sense and has some real-world context. It certainly is a film that, for once, actually understands to a certain extent how some things go viral and how good marketing works, and it even has some good jokes about how you can get in trouble on Twitter, which feels apt. Now, this film does have a lot of humour which some people would describe as problematic, though the film at least addresses the problematic nature of it and, in that sense, actually does a pretty good job of showing why someone from 100 years ago would have a very different attitude to the world than someone that’s alive now. The film doesn’t address it too much, but it’s at least there. But the film’s biggest issue is just the fact that it keeps going back and forth between tones.

So, where does that leave us with this film? Well, it’s not as if there’s nothing to work with here – there’s definitely a very good film trying to get out, but I think this film really needs to decide more with either being a complete absurdist comedy, actually trying to have the drama of a man out of time, or try to be more of an odd-couple film. It never really sticks to one, but that being said at least none of the elements feel weak. What does seem interesting to me though is the fact that they’d gone to all this trouble of having the dual Seth Rogens and they’re barely on screen together; they certainly share a lot of scenes but it’s very clear that some aspects of this have been somewhat altered. These scenes have really been made with the intention of keeping the effects budget down. I don’t think the two Rogens actually share many scenes of them both together in the same shot, and it is somewhat distracting. There’s not much like the famous scene in Legend of the crazed fighting each other, though that being said there’s nothing as bizarre as Michael Fassbender acting with himself in Alien Covenant.

Now, as a comedy, some of the jokes hit quite well; some of them don’t. It’s alright, all things considered in that sense. Where it does have a lot of strength is when the jokes hit – when the jokes hit, they do quite well. I actually think some of the jokes are really genuinely quite good, and it did pass the test of making me laugh quite a few times throughout the film, and there were genuinely a few scenes where I thought this was very well-written and directed. I did actually come out of this film kind of happy that I had seen it in a sense because it feels like Seth Rogen is taking on a lot more rather mature roles that certainly seem to have made more of his talents, and it definitely seems like Seth Rogen has brought a lot of the experience he has from working with more acclaimed directors in this film – he seems to be doing quite a good job balancing his comedic and dramatic side within this film. The rest of the performances are just really so-so. In fact, not a lot of characters appear in the film long enough to really reach such an impact; this really is kind of the one-person Seth Rogen show.

Now, that being said, it is of course absurdist comedy, and if you’re not really into that style you’re not going to enjoy it. And really, this definitely doesn’t feel like it was meant for the big screen; this definitely felt like it was made HBO Max subscribers, which leads me to believe this one might have done a big better if it had gone straight to Netflix over here or another streaming service, but considering just how few films are going to cinemas at the minute, I’m not going to complain.

An American Pickle is a decent film all things considered, but it has a few tonal issues, doesn’t really do much with the dual Seth Rogens, and just can’t really decide what film it wants to be. I wouldn’t say it’s a completely tonally confused film but it definitely doesn’t quite know how to strike a balance and I did get a lot of mood-whiplash watching it. That being said, I’ve seen a lot of films that had this problem in a much worse way and this one comes out relatively well as a result – there are some genuinely touching scenes in the movie and I can’t say I didn’t enjoy it in that sense. An American Pickle, you do have to suspend your disbelief in quite a lot of ways watching it, but if you can, I think it’s worth a watch. Though I’m not sure this is one to be going back to the cinemas for.
Calvin – Nerd Consultant
Share This Post: