Army of the Dead – Review 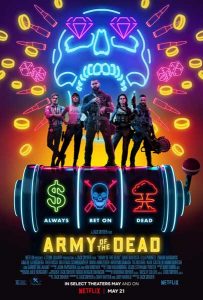 “Army of the Dead”

Army of the Dead is a 2.5-hour Netflix film that’s been written and directed by Zack Snyder and is his first completed work in a long time, not counting his work on the Snyder cut Justice League (which I still haven’t watched by the way). I’ve said a lot of the time that I do not like Zack Snyder’s films for the most part. I can only name 2 films I like: 300 which kind of suits his style even though it’s based on wildly inaccurate takes on what the politics of Sparta and Persia were at the time, and his remake of Dawn of the Dead which I just kind of tolerate for the most part. I’m not really a fan of it, even if it did actually get a lot of people to listen to Disturbed after the fact since their song ‘Down With The Sickness’ was the main theme.

Zack Snyder’s now gone back to the zombie world again to make this new film, which I wasn’t even aware of until I watched a WWE pay-per-view where they inexplicably made a promotion for it, probably due to the fact that the main star is former WWE superstar Dave Bautista. But when I looked into it, this is really a Zack Snyder film full through and through. He’s not only the writer and director but he’s also the producer. So, yeah, this is really him more than anything else. And I get a sense that this was going to Netflix prior to the pandemic. You can definitely tell based on the runtime, the gratuitous amounts of gore, and some large portions of basically gratuitous nudity, aiming to get around having to deal with making a cut for cinemas. Netflix really has become a breeding ground for writers, directors and stars that everyone’s kind of getting tired of and have realised they’re not going to make a big buck out of putting their films in cinemas. There’s a reason why Michael Bay and Adam Sandler have retired there, though that being said Adam Sandler obviously is now starting to make a comeback after doing more dramatic performances which—credit where credit’s due—he’s done a pretty good job with.

The premise of Army of the Dead is very simple: Dave Bautista leads a heist team to go into a relatively recently infected zombie-infested Las Vegas to obtain a bunch of money for the American government, as well as some undisclosed property of theirs. Honestly, the fact they’re hired by the American government is so unnecessary for the plot I think you could cut it and make it a pure heist film and it wouldn’t have made much of a difference. And it’s frankly not much more than that. There’s a whole thing around the zombies having this sort of hierarchical system, and there’s a king and queen of the zombies and the zombie tiger which has been heavily put in the advertising. It really doesn’t feel like there’s much change there, however. I don’t honestly get where this film is going in terms of its direction. I suppose Snyder has played the Resident Evil games, but in Resident Evil’s case there’s actually a very good reason why there’s a different variety of monsters around: they’re deliberately genetically designed monsters created through viral research, so it makes sense that manmade bio-weapons would have all these different properties. I don’t know if the main zombie king that’s super intelligent is designed by the American government because they never elaborate on it. How does the hierarchical system work? There’s not too much variety either—there are only two intelligent zombies in this whole thing so it kind of detracts from whatever the film was going for with it.

One of the biggest problems with Zack Synder’s Dawn of the Dead is he tried to keep a lot of George Romero’s commentary about commercialization and consumerism from the original film but he kind of dumbs it down which I would say is a fair criticism. The best zombie films have subtle commentary, not completely absent or hit-you-over-the-face-with-the-word-commentary-written-on-it, something I describe for the previously reviewed film, The Dead Don’t Die. And like that film, this one’s a slog but it doesn’t have that level of commentary. I frankly think it’s worse than Dawn of the Dead in that sense. There’s some sort of vague commentary against ice and the American government’s treatment of immigration from Latin America, particularly considering this was probably written around the end of the Trump administration. But they never go all out with it; it’s a minor point of the film and none of it’s even really tied in that much with the zombies. The zombies themselves don’t really reflect it in any way, shape or form, and the society hasn’t really been molded much more differently since this is not really an apocalypse, it’s a contained apocalypse. Take, for example, George Romero’s Dawn of the Dead which I actually re-watched recently in preparation for this film. It’s a really good watch, seriously worth it. In that film, George Romero does a good job with the whole idea of the zombies mindlessly gathering at a mall knowing that there are survivors inside. It was a nice, subtle take on vapid consumerism, and that was prior to the mall craze hitting the States. George Romero was ahead of his time in this instance.

In the case of Army of the Dead, any sort of commentary is done away with and has virtually nothing to do with the zombies that have invaded Vegas. It’s also undercut, considering that the actual Sean Spicer has a cameo in this one. Yes, Trump’s first very controversial press secretary that appeared on the American version of Strictly Come Dancing has a cameo as a right-wing pundit on a debate show about nuking Vegas. I just felt like pointing that out considering that Netflix is now paying a congenital liar who’s twisted facts, and after the fact wouldn’t denounce false claims of a rigged US election, and he’s brought in for just a joke. What’s more, he’s not really acting in these scenes; he’s just being himself, and he doesn’t realise he’s being made to be a parody so it doesn’t even really work. What did Ben Shapiro see through this role when you offered him the cameo?

Politics aside, the crew that they put together is so dull and uninteresting. You’d think with a 2.5-hour run time you’d have enough time to build up these characters, but I don’t remember any of them by their names and I wrote this a couple of days after seeing it! I just remember there’s the YouTube star; the safe cracker who looks like one of the cast of Trainspotting; the racist security guard who you know is going to die in a terrible manner; the obvious traitor who you also know is going to get killed in the most brutal way possible and you’re just waiting for it to happen; Dave Bautista’s daughter who obviously has plot armor through most of the film (in case anyone’s wondering, plot armor means that you can’t die for a certain portion of the film); the helicopter pilot who’s barely in the movie, and now I’m running out of characters to talk about. No one’s very interesting, and most of them don’t really feel like they bring an extra skill to the table; the only one who really does in the safe cracker. That’s it.

The film is dumb as well. Now, I don’t mind dumb films but this is particularly dumb and really dull. I can’t stress enough that this film is 2.5 hours long and it has absolutely no right to be so. I was thoroughly bored in the first half—it’s as dull as tar. I didn’t really even start paying attention to it until we got to a sequence around sleeping zombies which actually was based on a cool idea but is shot so appallingly that you can’t tell anything that’s happening. And while I’m on the subject, the cinematography is really ropey at times. There are some genuinely very well-done shots but there were some sequences that were so hard to make out that they just looked awful. But if I’m going to talk about anything in particular it’s the gore. There are some genuinely good gore effects in this film, but after a while they start to lose their luster. And that’s a decent metaphor for the film: it’s a decent idea for a film but it’s not well-thought-out enough.

Army of the Dead is a decent Netflix film but I’m glad this wasn’t the first film I went back to cinemas to see as there are much better movies coming in the next couple of weeks that make it even more worth getting that second vaccine. The film is a very slow, dull experience that doesn’t have memorable characters and feels like it’s too long, with a lot of sound and nothing else. There are some decent ideas for a zombie movie here but this definitely needed another rewrite. But I’m at least glad Zack Snyder is back making films. I’ll be honest, I stand by my comments that I’ve not liked any of his DC movies (granted I haven’t seen his cut of Justice League but that’s another matter), and I will freely admit that Sucker Punch is still one of the worst films I’ve ever seen. But he seems like a very decent person who’s never really compromised on what he wants to make, which I can at least respect. And he at least hasn’t actively deceived the public like other directors have. Looking at you, Michael Bay, with Pearl Harbor and your Benghazi movie which was actively used to promote Donald Trump’s election campaign, you wazzock!

Army of the Dead is not a good film, but if you’ve got a Netflix account and you’re at all curious you might as well check it out; it’s not as if you’re losing out on any money.
Calvin – Nerd Consultant
Share This Post: