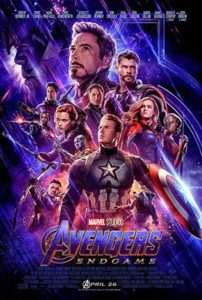 Avengers: Endgame has been an agonising year long wait for the Russo brothers to give us the final portion of the Cinematic Universe. With Endgame finally upon us, people have been begging for no spoilers and as a result, this review will contain no spoilers for Endgame, however, I will talk about the ending of Infinity War, so be warned. Now Endgame was the most hyped film I was waiting for all year and rather like last year, not much has been given away in the trailer, so as a result this will be a rather short review to avoid those spoilers and might be a little bit vague.

As you’d expect, this film takes place after the events of Infinity War, with Thanos, once again played by Josh Brolin, having wiped out half of the universe using the Infinity Stones. The film chronicles the aftermath of that scenario and the Marvel Universe going forwards. Endgame is less of an epic than Infinity War was meant to be for the most part, it’s actually kind of a sombre film and it takes a while until a lot of what we expect from the Marvel Cinematic Universe becomes apparent, but they’re all there. The Russo brothers really, once again knock it out of the park. Endgame is a phenomenal film as well.

The entire MCU up to this point has been building to this film and it will not disappoint. The film is fantastic in every sense of the word, it does have its issues here and there and the fact that because it doesn’t quite feel as much of an epic film, really because it takes a while for the epic-ness to really go off but at the same time, everything that happens does feel very appropriate.

There are some excellent moments in this film, however, I really cannot go into detail about many of them but believe me this film is going to surprise you in a few ways and I am genuinely wondering how the ending is going to affect this franchise going forward since Marvel is continuing into a 4th phase. The ending certainly feels appropriate and much of the Marvel fan base are going to really lose their minds at many of the moments of these films.

The cast is once again phenomenal and while many parts of it could be seen as a bit predictable, there is also a lot of genuine surprise and many of the actors are giving excellent performances once again, including Josh Brolin’s Thanos, Robert Downey Jr as Tony Stark, Chris Evans as Captain America and of course Chris Hemsworth as Thor and the film fortunately actually answers a few questions about the ending of Thor: Ragnarok, so we’re happy about that. The fight scenes, well they’re all done once again brilliantly. The Russo brothers should really be the standard bearer for how good action scenes are shot and believe me they, once again, do an excellent job. I’m not going to lie, Endgame is a hard one to talk about since I can’t really discuss much of the film because of just everything that happens in it and I don’t want to spoil it, but man, was it a great film!

The second part feels like it’s an excellent ending to this phase of Marvel and I would be interested to see where the Cinematic Universe is going post this film. It feels as though 11 years has been building to this point and it has really paid off. Endgame is once again an excellent standard bearer for superhero movies. I don’t know how long spoilers are going to be avoided with this film so I would say it’s really pertinent that you go and see this film as soon as possible.

Well that’s it for me this week. Next week I’m going to review the latest Conjuring film The Curse of La Llrona.

With all that being said, thanks for reading this review, I hope you enjoyed reading it as much I enjoyed writing it.
Calvin – Nerd Consultant
Share This Post: