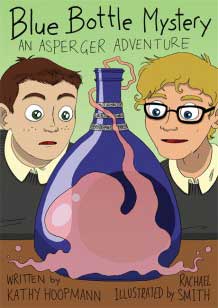 Dr Buchan approached me with this graphic novel knowing my propensity towards comics which I have expressed in my Axia Film Society Reviews and asked me to review it for the website. I took on the task with some apprehension as reviewing a comic is very different to reviewing a film but I know what I like and what I don’t like so I took on the task.

The graphic novel is apparently adapted from a story by Kathy Hoopman who has previously written “All Cats Have Aspergers Syndrome” and “Inside Aspergers Looking Out”. It’s been adapted by Mike Medaglia who writes comics for the Huffington Post and the Art is has been done by Rachael Smith who has done art for several Doctor Who comics so overall a team of varied experience.

I’m not going to talk too much about specific plot details because I really want people to go out and read this comic for themselves. The plot feels rather “Richard Curtis” for a lack of a better term, where everything is a bit drab and it all sorts itself a little too perfectly. That’s not to say there isn’t stuff to enjoy in this story, in fact I was rather invested in it for the most part particularly in the books main character who gets the most focus and development and it has an interesting message of be careful what you wish for. It’s not exactly a long story coming in at 64 pages or about 3 individual issues, that’s about a third of a traditional graphic novel and about half a regular trade paperback so you won’t be losing yourself in it on a train journey but it makes a good quick read in the afternoon. But the most important thing about this book is how it treats and discusses Aspergers syndrome. For the most part it’s handled well with good dialogue and thought bubbles as well some decent artwork, at times however it feels rather forced and on that basis I’d more recommend this to parents and recently diagnosed children who will get the most out of it.

The Artwork is where I take the most issue. It’s good for the most part and suits the story well but it just isn’t my thing. I know that’s my problem but it really feels slightly too amateurish almost the sort of stuff you can get away with for a web comic but not a published piece of work.

Overall I liked this graphic novel but I wasn’t amazed by it. It was a good distraction for a lazy afternoon and could easily see this adapted into a children’s series but not something I’ll revisit. I’ll leave it up to your own opinion on whether people with aspergers syndrome would get something out of it but I would recommend it on the basis of the possibility that they will. The authors Asperger Adventure series is available in several novels including this one, however as far as I’m aware none of the other stories are available in graphic novel form, though if they do receive adaptations I think I’ll finish what I started and review the rest.