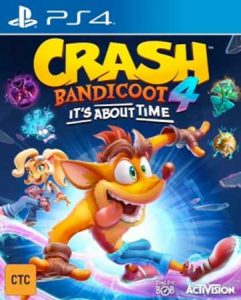 Crash Bandicoot 4 is the latest game Activision have brought out the N.Sane trilogy 2 years ago being full on remakes of the PlayStation 1 games as well as a remakes of CTR to build up the franchise from the ashes. With Crash 4 we have a new developer, Vicarious Visions were working on Tony Hawk Pro Skater 1 and 2 Remake and the job was handed over to Toys For Bob who developed the Spyro Reignited Trilogy. The game is fundmentally the same as the N.Sane trilogy and picks up from the end of Crash 3 (effectively erasing all the games past Wrath of Cortex on PS2 to be a partial reboot). Dr Neo Cortex and Dr N. Tropy have escaped from their time travel prison and are now messing with reality by fracturing several timelines and Crash and his sister Coco have to stop them. It’s as basic a Crash plot as it gets though there’s some nice call backs to previous games in here that I won’t completely spoil. the game structure is also very similar to several areas and complete several levels to progress to the next however this time you only have to beat 4 levels as opposed to 5 though a few optional ones also pop up. the other differences are that this time you don’t chose the order of the mandatory levels it’s completely linear like Crash 1 and there’s no crystal to collect. Instead when you reach the end of a level you get a series of gems, there’s of course the box gem for breaking every box in the level but now there’s a hidden gem in each level plus 3 gems for getting 40,60 and 80% of the whumpa fruit in each level and a gem for dying 3 times or less. Plus if you can get all in 1 run you get a perfect gem for your troubles. the game also brings back the time relics and adds a couple of multiplayer functions to boot.

Crash Bandicoot 4 looks great and just doing all the levels from start to finish without going for 100% makes this game one of the best platformers in recent memory. The controls feel way more precise, the levels are well designed and it feels like a nice throwback to the classic games whilst adding modern flare to it. the game goes downhill when you go for 100% completion with some really overboard challenges and collectables and they really could’ve dialled back a bit on it. but you absolutely should get this game because if you tailor it to your likeing you can get a lot of great play time out of it

Absolutely recommend buying it even if you’re planning on moving to the PlayStation 5 or Xbox Series X later this year. the game is £50 right now but I think it can justify this price though it might be worth waiting for a sale when picking up the next generations of consoles, trust me it’ll probably look even better with what those consoles are showing what they can do with backwards compatibility. PC and Switch owners should hang on because I suspect this will get ports to those systems sometime next year.
Calvin – Nerd Consultant
Share This Post: