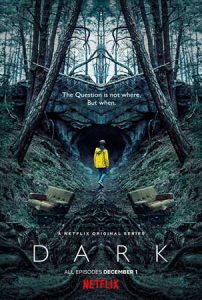 The isolated German town of Winden is home to many mysteries, it would seem. Alleged disappearances and abductions seem to plague the community – understandable, given the vast sea of woodland that surrounds it; these things are bound to happen, right? This does not seem to be the case, as Ulrich Nielsen (Oliver Masucci) fervently searches for his son, Mikkel (Daan Lennard Liebrenz), after he disappears in the forest. Meanwhile, Jonas Kahnwald (Louis Hofmann) finds re-integrating to school difficult, following his father’s suicide months earlier. With the imposing proximity of a nuclear power plant, the shadow it casts seems to loom on endlessly and its intensity is branded on the lives of Winden’s inhabitants; a scarred network, connected through their sins. Dark very much lives up to its name in that it keeps you firmly bound within it, feeding you fractions of light until the bigger picture is revealed.

Germany’s most recent assault on the Sci-Fi Horror genre, Netflix’s Dark does not have the easiest time standing up against heavyweight productions. Stranger Things is one that springs to mind pretty much immediately, and not only because they share a parent company. While Stranger Things is more of an ode to the nerd-culture prevalent around the 80s, Dark rarely harkens back nostalgically in this way, and is all the better for it. It’s one thing to give shout outs – I mean, who doesn’t love a well-placed Star Wars reference – but it requires a greater degree of conviction to stay thematically on track with what you intend the show to be. In this case, the template of Sci-Fi Horror/Thriller is rigidly adhered to and is wonderfully executed. Specifically, the themes of isolation, entrapment and secrecy are explored and is echoed resonantly in the setting. The nuclear plant dominates the livelihood of Winden’s residents and physically towers above the town, appearing to be more of a Gothic keep than a pillar of industry. In addition, the forest acts as shelter for shady goings on, imbuing the place with a sense of the profane. Altogether, these thematic choices contribute to a sense of intense unease as elusive plots and suspicious connections are gradually revealed to us.

Dark is all about understanding the intricate web of relationships between characters, and how everything slots together. It does this through adopting a fractured narrative, separated by thirty-three year gaps; in 1953, 1986, and in 2019. The bulk of the plot takes place in 2019, giving us a somewhat more familiar setting in which to ground ourselves initially. Here, we meet the individuals – parents, grandparents – who are elaborated on further as we dart hither and thither between the time periods. Though this is executed with stunning proficiency, at times the change over can be quite jarring, as we are bombarded with faces and names to remember in order to fully understand character motivations and the like. While this may seem like a downside, what it does provide us with (if you take a couple of minutes to reflect every so often on how things tie together) is those ‘OH MY GOD I GET IT NOW’ moments that makes all the setup worthwhile. Combine this with some truly brilliant performances, courtesy of Ulrich (Oliver Masucci), Noah (Mark Waschke), Hannah Kahnwald (Maja Schöne), and Egon Tiedemann (Christian Pätzold), Dark stands out as a character piece with great depth, not often seen in media today.

Unfortunately for the average non-German language media consumer (the uncultured masses that we are), the wonderful performances delivered to us in this show are unlikely to carry over to English language productions. Though, in terms of direction, Baran bo Odar (director of Who Am I, and Silence), the success of Dark could very well see further partnerships with Netflix, or larger production companies in future. That is certainly the outcome that I hope for, as I rate this show very highly, and would recommend it to anybody perhaps looking to fill the hole in the interim between Stranger Things seasons two and three (I know I went to lengths to differentiate the two shows, but they do go hand in hand rather well). If you can handle subtitles, I recommend watching it in original audio. Coming from a background of intensive anime watching, I think hearing the original deliveries of the lines provides a more authentic and realistic view of what’s happening, even if the words don’t quite match up.

All in all, 4.5/5. It would have more, but as I mentioned, the flitting between time periods will lead to varying degrees of confusion in any viewers not directly related to Hawking or Einstein. Even then, to us non-geniuses, weak points appear in Dark in the form of Bartosz’s (Paul Lux) complete lack of the facial muscles required for expression and, even though the show makes meticulous effort not to trip over itself in terms of continuity, sometimes it inevitably does. Regardless of the fenickity nitpickery, I wholeheartedly recommend this show to anybody in the market for a high-quality production to binge watch; the score is incredible, the imagery is dour and absorbing, and you cannot help but become ensconced in the deeper workings of the characters we observe throughout. Dark is definitely one of the better shows Netflix has left somewhat in the shadows, and it sure to garner a significant cult following.

And that’s it from me. Apologies for the inactivity in releasing written reviews, and I hope you enjoyed reading. See you soon!