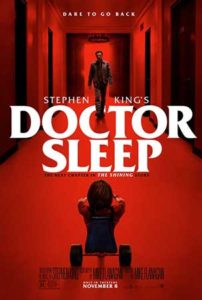 Doctor Sleep is an interesting film out of the gate. It’s essentially a sequel to The Shining, which in itself provides a bit of an issue. See, Doctor Sleep, rather like its previous counterpart, is a film based on a book by Stephen King, and if you have the knowledge of Stephen King’s history, you’ll know that that brings up a bit of an issue here. The Shining is a big part of Stephen King’s life; it’s one of his best-known stories. But it also would play a big part in his feelings on giving away his stories for adaptation purposes, since the original film, directed by Stanley Kubrick, drifted very far from the novel. Not to amazing extent; the two stories are very alike but there’s just a few changes here and there which affect the thing as a whole.

For the record, I really like The Shining. It’s genuinely one of Stanley Kubrick’s best works, and I will not hear otherwise. Kubrick’s direction in that film is what makes the movie. He knows exactly how to convey the terror of a situation perfectly, and it really shows in the final product. This leads into a bit of a problem as Stephen King has been heavily involved in this film’s production, even more so than he was in The Shining. And Stephen King has a real habit of making sure that the adaptations of his films are close to his books, to such an extent that you almost get the feeling that he doesn’t really care about anything else about the films as long as their close to the book. This has been very apparent this year with this being the third adaptation of one of his books coming out, alongside the remake of Pet Cemetery and the previously reviewed, IT Chapter 2. This definitely presents the problem , well, we’re now adapting this to a film, but we’ve also got to adapt the book, which is drastically different.

How does the film hold up? Well, the film takes place decades after, with a grown-up Danny Torrance (played by Ewan McGregor) trying to bring his life back together after he fell into becoming an alcoholic, since Stephen King can’t seem to write a story unless it has at least one alcoholic character. After getting his life back on track, he realizes his duty is to work at a hospice to comfort people who are about to die, but also aids a particularly powerful girl with The Shining named Abra, played by Kyliegh Curran, who’s being pursued by a group of travelling shining hunters, led by Rose the Hat, played by Rebecca Ferguson.

You know what really sold me on this film before it even came out? It was a combination of things. The film’s been directed by Mike Flanagan, who also wrote the screenplay, who’s recently directed the Netflix hit, The Haunting of Hill House, but has also made excellent horror films like Harsh and Oculus and even made Ouija: Origin of Evil. It takes a talent to rescue a franchise that crap after a first film that was so bad. Second of all was the cast; this cast is excellent. Not just the A-listers of Rebecca Ferguson and Ewan McGregor, we also have an excellent cast with Emily Alyn Lind, Jacob Tremblay, Carel Struycken, Danny Lloyd, Cliff Curtis. There’s a real who’s who of actors that I really enjoy. While we’re on the subject of that, Cliff Curtis seems to have gone from strength to strength since he fired the person who made him be the Firelord in that terrible The Last Airbender movie.

The fact of the matter is though, we have to take a look at this film’s biggest strength, its first two-thirds. There’s actually a fairly decent, well-flowing story for the most part. However, this is also very much where we have two of my biggest problems with Stephen King. For one thing, I’m not the first person to point out the fact that Stephen King has great set-up, but he doesn’t have very good payoffs. You may have a great build-up but you’re not necessarily going to get it to work, and this film is another example. This film’s actually, from what I’ve heard, a fairly good adaptation of the book, which must have been really hard considering the differences between the book and the film of The Shining. For one thing, and I have to give away minor spoilers in terms for the book for this one, Hallorann survives in the book. So, in this film, they have to have him dead, played by Carl Lumbly, who really expertly goes into playing the character. Though considering how talented of a voice actor he is, that’s hardly surprisingly.

This film is really trying to be its own thing for the most part, but it also suffers from the fact that it’s trying to give a bit too much of an explanation to the actual powers. Once again, I feel it’s an over-explanation. We also had this issue of, well, it’s got to make several homages to the Kubrick movie, and the problem with doing that is that the thing then turns into a bit of a nostalgia trip, and that takes away from a lot of the fear of what these things were in the original film. The old lady in the bathtub, for example, is way overused in this movie. And it’s all sorts of moments like that. In fact, considering how much they go into detail about everything, you’d actually think Mike Flanagan was doing a bit of an apology to Stephen King, since he even starts to put in a few elements from the original book into this movie. And then the third act is where the film completely flops. The third act of this movie is doing so much stuff from The Shining verbatim. It’s not even subtle in how much of a nostalgia trip it is, but I almost don’t care at this point. Some of the lookalikes they’ve hired are really good but some of them are just appalling, including one towards the end where I just went, “Really? That’s the best lookalike you could find?”

Here’s the best way to put it: the real enjoyment of this is going to be on a perpetuation of, “Do you enjoy Stephen King’s books?” If the answer is yes, you’ll probably enjoy this film. If you enjoyed the 1980 Kubrick movie, I’m not guaranteed you will. Mike Flanagan obviously had to put in tons of throwbacks to that film. It was inevitable. The film version has almost transcended its book, to such an extent that most of the things he pays homage to would have been film-original elements. Most of the iconic scary moments in the film were not in the book, including the creepy twins, the blood elevator, “all-work-and-no-play-make-Jack-a-dull-boy”, yeah, those are film-original. I like the fact they tried to recapture the feeling of that film in the third act, and the trailers do kind of give away that it’s going to all go back to the Outlook Hotel, which is a shame considering that I think that would have been a nice surprise. But man, that’s where everything I was really worried about the film goes off.

It’s probably going to sound like I thought Dr Sleep was a bad film, but I think that’s more the fact that I’m not a massive Stephen King fan; I often think most of the best adaptations of his work are the ones which do know when to make changes to suit a new medium, some exceptions, like The Shawshank Redemption, notwithstanding. It’s just that, for the most part, I thought the first two-thirds of this film were very solid, but it does not stick the landing. And the overuse of The Shining in this movie kind of made it feel like a superhero movie at times, with horror elements. I kind of left the film feeling a bit mixed on almost every level; I don’t really dislike Dr Sleep, but I don’t exactly like it altogether, it’s a bit of a mixed bag.

Dr Sleep has excellent performances from people like Rebecca Ferguson, Ewan McGregor and Kyliegh Curran, as well as an excellent cast, but it ultimately feels like a film that falls down by the fact it tries to merge the tones of both Stephen King and Stanley Kubrick, which, despite their relative similarities in certain areas, they’re almost polar opposites in others. As a result, I don’t think the film will appeal completely to people who are fans of either one of them. Because most of the film tries to take Stephen King’s style, that’s the point where it kind of succeeds. When the film tries to be Kubrick, well, Mike Flanagan’s good but he’s no Kubrick. I wouldn’t say the film’s a mess per-say but given what we’ve ended up with, this film could have got a hell of a lot worse. My advice would be, see the movie but be aware that there’s a chance that you might find something that doesn’t completely suit you.

Well, that’s it for another week from me. Join me next week when I’m going to be talking about the next film from director, Tom Harper, where he reunites Eddie Redmayne and Felicity Jones for The Aeronauts. With all that being said, thanks for reading this review. I hope you enjoyed reading it as much as I enjoyed writing it.
Calvin – Nerd Consultant
Share This Post: