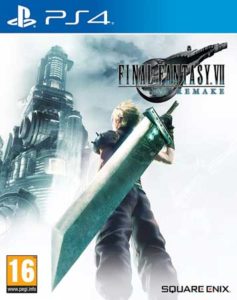 (available for PlayStation 4 only)

It’s finally been released. In usual Square-Enix fashion it was revealed to be in development in 2015 before getting released in 2020. Square-Enix really is a company that are really good at revealing a game but will take a long time getting it actually released. This game has not been without it’s controversy, for starters it was confirmed that the game would be released episodically with the game only covering Midgar section at release with Square-Enix having not released their plans for future content at this time. It also has been hit by a few delays but has now finally come out, to be honest I expected it to release in 2017 to mark the 20th anniversary of Final Fantasy 7 and the end of the Final Fantasy extended universe. the release has caused a lot of discussion given it’s changes from the original story but I’m choosing not to reveal any spoilers but I will say that apart from a changed ending the only major changes are that some been slightly altered, some characters are slightly expanded from the original games, some methods of getting from one established plot point to another have been slightly altered and there’s a bit of extra padding to extend times in the environment. Put it this way in the original PS1 game, which is in terms of current systems is re released and currently available on PS4, Nintendo Switch, PC and even mobile phones with IOS and Android, the main segment around Midgar at the beginning of the game lasts between 4-5 hours depending on your skills, Final Fantasy 7 Remake has a minimum of 33 hours to beat just the main story that goes up to 42 hours with extras and 80 hours if you’re a completionist. that’s over 20 hours more gameplay just for the main story time but I’ve always stated that it’s not how long a game is it’s what it does with it’s time. Final Fantasy 7 Remake is what it looked like in all the trailers, a group of current Square-Enix developers reimagining Final Fantasy 7 as if it was a modern Triple A game. for what it’s worth they have succeeded in several regards changing it from a turn based RPG bringing in many elements from Final Fantasy 15 and Kingdom Hearts, which is unsurprising given Tetsuya Nomura is directing (after this and getting Kingdom Hearts 3 done I think he’s earnt time off). however the game has added a classic mode which doesn’t bring back the style of the classic game but does replicate some of the feel of it, more on my thoughts on that later.

Final Fantasy 7 Remake is a good update to a classic and is my favourite Final Fantasy game since 10 and I really apricated it though it’s not a perfect game. it suffers from a lot of padding to extend game time and the I wish the companion AI was smarter. Plus I personally don’t think the remake is as accommodating to new players as the original was. it’s very clear this was made for people who experienced the original game for an updated nostalgia trip and I can accept that but I think it will make it harder for new players to get involved with a much harder game with a higher difficulty curve newcomers. That being said this game exceeded my expectations with it’s quality and I was really expected to enjoy it way less than I did, the story is still excellent, the battle system is what I’ve wanted for some time in Final Fantasy and when you get the hang of the battle system I would say in a few ways it’s an improvement over Final Fantasy 15 plus I felt really motivated to play more and more. Fina Fantasy 7is a milestone of gaming that everyone should experience at some point in their life and I stress this is a really good game you should absolutely give a shot though my judgment may change as we complete the story going forward.

I would really recommend playing the original Final Fantasy 7 to really appreciate many aspects of the story and I will stand by that I think the Original is an overall better game but when you’re done absolutely get this game since I really do recommend it and both re available on PlayStation 4 so I would recommend both games and I think it’ll make for good comparison features in the future.
Calvin – Nerd Consultant
Share This Post: