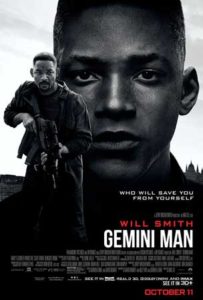 ‘Gemini Man’ is a production that has been floating around in Hollywood since the late 90s. It has been kicked around so much that I think it’s very possible that anyone who had any vision must have left ages ago. It’s not as if this has been a grand story people wanted to tell. The idea has simply been thrown around of, “What if we could make an actor look like they had a double who was a younger version of themselves?” The idea had not got to cinemas simply because the technology hadn’t existed until recently. It’s just that simple.

Now, with technology improving in special effects, the project has tried to be revived, but until now, settling on actors and a director has been a bit of a minefield. Various actors have been pitched including Harrison Ford, Sean Connery and many other recognizable names. Though the production this time seems to have stuck with Will Smith, an interesting choice given that his early 20s were a big time for him, with the actor coming to prominence through his appearance in ‘The Fresh Prince of Bel Air’. Similarly, various directors have been suggested for the film, including several big-name directors, you know, the sort you can put on a poster and say, it’s the director of so-and-so. In the end, the director that has been settled on is Ang Lee, who you most likely remember from his film, ‘Life of Pi’.

With its long and troubled production, how does Gemini Man work itself out? Well, if you’ve seen the trailers you know the story by now, that of a government assassin, Henry Rogen, played by Will Smith, going into retirement. However, information is passed onto him by an old friend, information which could be very damaging to the US government. As a result, private military leader, Clay Verris, played by Clive Owen, sends a younger clone of Henry, named Junior, played by Will Smith through motion capture technology, to take him down. The tag line of the film is basically, ‘Who will save you from yourself?’

So, here’s where I stand with this movie. It feels very appropriate that Ang Lee is directing this film. Ang Lee seems to really want to push cinema through technology. He’s certainly gone through a development over the years; he’s always had technology kind of on his mind, but he is also known for doing slow, character-driven pieces. These included him directing films such as ‘Crouching Tiger, Hidden Dragon’ and ‘Brokeback Mountain’, the latter of which earned him one of his two Oscars for best director. The other was for ‘Life of Pi’, which truly merged his love of both the use of technology as well as an ability to direct great character-driven stories.

However, he has had a couple of films whereby he hasn’t successfully managed to merge those two together. If you’ve ever seen his version of Hulk, for example, and while I haven’t seen his last film, ‘Billy Lynn’s Long Halftime Walk’, I’ve heard a lot of people say that not only was it blatant Oscar-bait, it was definitely pushing for a form of cinema that people didn’t really care to see. As a result, he seems almost perfect to direct ‘Gemini Man’. However, you’ve also got to remember that the story of this film is developed by Darren Lemke, who could be a good choice considering he rose as a scriptwriter on ‘Shazam!’, which I gave a very favourable review to. But the other writer is David Benioff, who’s been one of the main writers on ‘Game of Thrones’, which might explain the pacing in this film. And I can tell that this film’s production has gone back to the 90s – this really feels like the sort of movie that would pop up in the 90s.

One of the things I find bizarre about the film is that it’s two hours long, but it barely feels like anything happens it in. Although it’s a genuinely interesting idea for a film, the idea of cloning someone and facing the ghosts of your past, the problem is, they never truly dive into the subject. In fact, most of those moments feature in the trailer. The whole things feel very video game-y, and I don’t mean a good video game plot like ‘The Last of Us’, I mean a plot video game plot whereby the plot just exists to justify the fact that you’re going to play a game where you play as this character and have to defeat these enemies. I can certainly see this being done as a video game, though in that case, it would have appalling pacing. This film feels rushed from start to finish. (Speaking of video games, Gemini Man’s subject matter reminded me very heavily of Metal Gear Solid. If you want to see this plotline done right, I really would recommend Metal Gear Solid since the plotline of that video game executes these ideas much better).

It once again is a film that feels like it has a lot more to say than it actually does. Frankly, I’ve been rather waffling around, because I’ve not been talking about the major point of the film, the technology. At times, it looks really good – it does at times look like a 23-year-old Will Smith just fresh off finishing the last season of ‘The Fresh Prince of Bel Air’ has been transported to 2019 and cast in this film alongside his older self. Now, as Angry Joe pointed out in his review, it’s not the same technology that was used to de-age Samuel L Jackson for Captain Marvel. This film uses a combination of a stand-in and motion capture technology, and at times it looks great. At other times, it falls flat. And that’s a real shame because this technology, if refined, could be excellent.

I think the biggest issue I have with the film is that, once you get down to it, when you get that technology out of the way, once you’ve seen that effect, there’s not much to the actual film. It’s just hopping from one action scene to the next; there’s very little else to talk about as there isn’t much plot. As soon as you get around the gimmick, you realise it’s very paper-thin. There’s not much to the characters; you’ve seen them a hundred times. Really, the main gimmick of the film is all it has going for it.

The supporting cast is alright, Mary Elizabeth Winstead does a decent job and Clive Owen’s trying to play a decent villain. But the best part is definitely Benedict Wong, who gets some hilarious lines. (You’ll definitely know him when you see him. He played Wong in the Dr Strange film.)

If I’m talking about the action scenes -which of course, this is an action film- they’re shot… alright. Some of them are decent. The bike chase in Columbia, for example, is almost expertly shot. If there’s one thing Ang Lee can do very well, it’s good shot composition; he knows how to execute single shots and tracking shots. This is definitely true if you’ve seen ‘Life of Pi’ or ‘Crouching Tiger, Hidden Dragon’. But the lighting has kind of screwed him in some of these scenes, and some of them are shot appallingly. I’ve not had an action film in a long time that’s had such a juxtaposition of good action scenes to bad action scenes.

Look, really this is stalling for time. Gemini Man at the end of the day is a decent gimmick but it’s also there to cover the fact that this is a paper-thin plot that’s been kicked around Hollywood more times than a football in Wayne Rooney’s garden, in the hopes that someone would make some success out of it. And now that it’s finally here, it’s rather underwhelming and feels like a waste of the talents of both Will Smith, giving a decent dual performance and director, Ang Lee, who seems to be moving further and further away from his strengths with each passing film. When you get down it, this is something you’ve seen a lot and it really wasn’t that great the first time. Passable popcorn entertainment but not really in a good way, this is the kind of film you watch on Netflix when you have your mates round late at night because, screw it, we’ve seen everything else that’s on the recommended bar.

Ultimately, the gimmick that in a sense could probably elevate this film only ends up driving it down. Once you get past the dual performance of Will Smith, you really realise that the plot is empty, which I think accounts for its low score on Rotten Tomatoes and Metacritic. Save your money, there are much better films coming out in the next few months, and Joker is already in cinemas right now and is worth a watch.

Well, that’s me done for another week. Y’know what? It’s October and I think I need to do a film which suits the Halloween spirit, so next week I’ll be reviewing the sequel to ‘Zombieland’, ‘Zombieland: Double Tap’. With all that being said, thank you for reading this review. I hope you enjoyed reading it as much as I enjoyed writing it.
Calvin – Nerd Consultant
Share This Post: