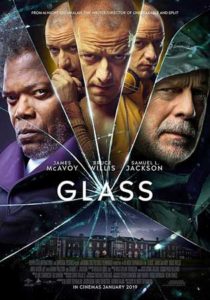 I make it no secret that I’m not a fan of M. Night Shyamalan, though with that being said, in the time since I have become a semi-professional film critic, his work has actually really improved.

I reviewed The Visit which was a film that while not great, was certainly an improvement of what had been done previously, despite having an insane final act and Split was actually a genuinely decent psychological thriller. Of course, Shyamalan is well known for doing his plot twists, but amongst many circles he becomes known as a rather pretentious Director. This was no more evident than with his film Lady and the Water, but, Split seemed to be a real turning point for him, for the most part. It seemed though it may be getting him back on track.

By the way, I know this is probably obvious, but spoilers for Unbreakable and Split.

Yeah, of course, the twist at the end of Split was that it was entirely taking place within the Universe of Shyamalan’s previous film, Unbreakable, a rather deconstruction take on Superhero fiction. The plot of Split on the other hand was a psychological thriller about a man with multiple personality disorder, although of course the twist being that he doesn’t have multiple personally disorder, there genuinely are sever conscience living in his body and he is now known as the Hoard.

So, what we have now is a rather interesting take. Of course, the knowledge that Split was a phantom sequel to Unbreakable meant that we knew another film was coming along. That was of course with Glass. Another film that Shyamalan has made with Bloom House productions and promised to be a conclusive piece to this film series. Well that’s an interesting topic.

Taking place a few weeks after the events of Split the film revolves around David Dunn, the main character from Unbreakable, played once again by Bruce Willis along with his son Joseph, played once again by Spencer Treat Clark, trying to track down the Hoard played by James McAvoy. However, during a fight between the pair they are taken to a mental health facility by the authorities, led by Dr Ellie Staple, Sarah Paulson, who specialises in people that have delusions of super powers, insisting they are just their imagination. There we have our first problem. While in my opinion, it is an interesting idea to have the sense of the powers are not real and it’s in their heads. Which would make us re-think the other films. It doesn’t change the fact that Shyamalan’s used these entire films to suggest the whole thing has been real. It’s one thing to have a situation where someone has a sudden ungodly strength to bend bars based on adrenaline rush, I could buy that, but, David was in a train accident and came off with no injuries and was the only one to survive. We are in a situation which doesn’t work.

The film does bring back Elijah, aka Mr Glass, once again played by Samuel L Jackson. As the title suggests, it is kind of his film. He doesn’t actually say much for a while, except expounding tonnes of comic book story tropes. He does this because Shyamalan has a real need to spell out the plot that is going on. Yeah, Shyamalan’s never been one to really trust his audience to figure something out, he really has to spell something out.

Glass is a film with a tonne of issues. One thing, most of the cast of both films are back, including Anya Taylor-Joy playing Casey Cooke, who was one of my favourite characters in Split, but, man is she dumb in this film. She went from being one of the smartest characters in that film to just a real dumb ass in this one. I don’t know what Shyamalan was thinking scripting her like this. It’s seriously baffling. The script fails her constantly. The annoying thing is Anya Taylor-Joy is a fantastic actress. As I mentioned already she was great in Split and she was brilliant in The Witch. In those films she had good scripts to work with, this film seems to have her do some sort of quasi connection with the Hoard. Why? Because they are both tortured souls. HELLO, THIS IS A MAN THAT LOCKED YOU IN A BASEMENT IN THE ZOO! He is not a troubled soul, he is a deeply dangerous man. Yet, the film tries to sort of down play a lot of that in this one.

Granted though, James McAvoy is once again great as all of these personalities that he has to play, doing an excellent job of it, despite how hammy he’s been directed.

The film is a real slog to get through. I’m not joking, it was genuinely a really dull film compared to Unbreakable and Split, which I re-watched in quick succession before seeing this so they were very fresh on my mind. Those films had very organic flows, which suited to their story lines. Glass does not. It’s not as self-contained as Split and Unbreakable, it’s trying to be too big in a sense. It does that typical Shyamalan thing, constantly going over the head with the fact it’s meant to be incredibly deep, experimental and deconstructive, which he got away with in Unbreakable because he was restrained.

Shyamalan has not been restrained this time. He’s in full pretentious mode and half the film it feels like him once again lashing out at the critics giving bad reviews to his films. Shyamalan once said in an interview before The Last Airbender, that he wasn’t being given good reviews by the critics, to which the interviewer (who I think was one of those ones on ITV who fawns over the person they are interviewing) said, “the critics just don’t get you”. His response to that was, “they’ve never got me and it’s getting worse”. I’m here to set the record straight Shyamalan, we got you, entirely, we completely got you, we just didn’t like it. There is a big difference between someone not getting it and someone completely getting it and saying it sucks.

Now, Glass is by no means Shyamalan’s worst film. It is actually decently paced and he never betrays it with some really stupid ideas that don’t work. For the most part. He kind of really drops a ball towards the ending, including a plot twist. Shock horror, Shyamalan film with a plot twist, that really doesn’t add anything to the final film. In fact, it’s one of them ones where you go, Oh my god, that’s a bit of a shocking twist, wait, that doesn’t really impact anything that much. I mean this is hardly as irrelevant as the plot twist in Jurassic World: Fallen Kingdom, but, my point still stands.

What’s more, Glass feels like a film that is constantly trying to do more than it needs to. I actually thought Split being set in the unbroken universe kind of played it, so they kind of took away from that film more than it added. It’s more evident here when they are trying to merge these two very different films together.

Plus, the film can never stick with, who is the bad guy? It constantly changes its opinion on what the characters motivation is. As a result, it is very difficult to get a grip on anything.

The acting is at least pretty decent. Bruce Willis is still pretty good in the role. James McAvoy, as already mentioned, is really entertaining in this role, though he has lost a lot of his creep factor that he had in Split. Samuel L Jackson is entertaining, even in bad films. Sarah Paulson gets a good performance as the new character Ellie Staple, who does a good job being the Psychiatrist, trying to make them all think they are crazy. But, again, these performances are rather undone by the fact that the fight scenes are once again terrible.

The one thing that’s happened with comic book movies since Unbreakable, is that the Marvel Cinematic Universe has come. That’s the thing, you can’t get away with this post Marvel. I don’t think audiences are cynical enough to go into, this is how a fight scene would look if you done it in real life.

It’s just kind of ergh as a whole, and that’s this film in a nutshell. It’s a very meh film. Glass is a decent attempt, but it ultimately falls flat. M Night Shyamalan tries a rather daring task of trying to mould two very different films together, and he doesn’t really end up succeeding very well. This is a shame as it is coming at a time where Shyamalan was actually on the rise and doing much better. This feels like a massive step backwards for his career. I personally think Shyamalan might have another good film in him, but I’m starting to think he’s going back down a rocky path. This film is not a good sign. Despite some decent performances, the script fails the film constantly and this is one confused mess of a film. Third time unfortunate in this case was not the charm.

Well that’s all from me for 2 weeks I’m on holiday. Join me in 2 weeks where I’ll be looking into the latest Live action adaptation of a Japanese property, as I review Aelita Battle Angle.

With all that being said. Thanks for reading this review, hope you’ve enjoyed reading it as much as I’ve enjoyed writing it.
Calvin – Nerd Consultant
Share This Post: