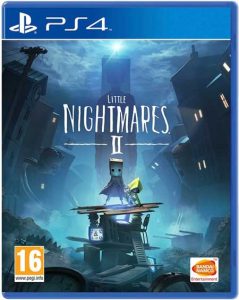 (Available for PlayStation4, Xbox One, Nintendo Switch and PC )
(PlayStation 5 and Xbox Series X|S versions due out at a later date)
(PC version used for review)

Little Nightmares 2 is the sequel to Indie Horror Puzzle Platformer Little Nightmares which saw you play as a small child navigating a dark world being hunted by grotesque giant adults hunting them down. I played the original in prep for this review and it is really worth a go, It’s only 4 hours long (not including DLC) which I did in 2 sittings. The sequels doesn’t really change up much, it’s the same physics and environmental based puzzles as before but the major differences being some limited combat and the fact you’re joined by the kid from the first game as a partner so if you played the first one you know what to expect though you will have a few surprises

Little Nightmares 2 is a genuine improvement over its original in many ways. It’s why it’s a shame that it falls down at the last hurdle with its final segments. Still if you want a great puzzle platformer and a great horror experience you really should buy this it’s great experience in every other regard. The gameplay feels really improved and everything feels like the developers looked at the first game and looked at expanding their scope to deliver a terrifying experience. It is a one off experience with low replay value. however the £25 price tag seems fair for the amount of game you’re getting. I did find some segments frustrating but they were few and far between and the atmosphere this game give off is amazing. If you have the ability to play this with headphones that have 3D audio features take advantage it adds a whole new level to the experience.

I would recommend picking this up on whichever platform you have it’s £25 at full price making it cheaper than a lot of the bigger games and I speculate it will probably come down in price with some online sales in the future. PlayStation 5 and Xbox series X|S owners might want to hold off until those versions come out though I believe they will be entitled to a free upgrade if they buy the PlayStation 4 or Xbox One version.
Calvin – Nerd Consultant
Share This Post: