MHT – Half of CCGs to cut mental health spending 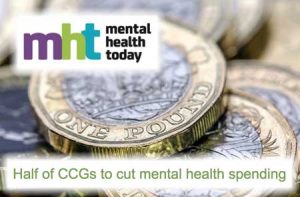 Half of CCGs to cut mental health spending
Half of clinical commissioning groups plan to reduce the proportion of their budget they spend on mental health for this financial year (2017/18), according to new figures from Labour’s Luciana Berger.

Of the 129 CCGs (62%) that responded to the freedom of information request, 64 (50%) plan to reduce the proportion of their budget they will spend on mental health.

In 2014, 67% of CCGs did not intend to increase their proportion of spend on mental health.

The Health Secretary, Jeremy Hunt, stated in an Opposition Day Debate on Mental Health in December 2015 that “CCGs are committed to increasing the proportion of their funding that goes into mental health.”

NHS England’s planning guidance for 2017 – 2019 states that all CCGs are required to increase their spend on mental health by at least as much as their overall budget increase.

Referring to the guidance in July 2015, the then Minister for Care and Support, Alistair Burt, said in Parliament: “That is as transparent as it has ever been, and we will ensure that that standard is maintained.”