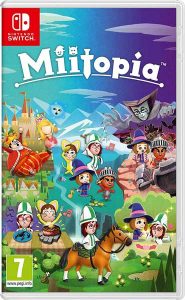 (Avaliable on Nintendo Switch only)

Around September last year, we heard the unfortunate, yet understandable, news of the discontinuation of the Nintendo 3DS. Looking back, I did not appreciate the console nearly as much as I should have. It had an insanely good library of games, with titles from well known to obscure or new IPs coming to the system, including some the best in their series like Fire Emblem Awakening or The Legend of Zelda: A Link Between Worlds. One of these games being Miitopia, a spiritual-successor/spin-off to Tomodachi Life, which came out a few years prior. The game received average ratings from critics, but was beloved by general audiences, so of course many people were hoping for some representation of the game to come to the Nintendo Switch. Which we finally got in the February 2021 Nintendo Direct, when they announced that Miitopia was being ported to the Nintendo Switch, and was eventually released on 21st May 2021.

In the game, the world of Miitopia is being ravaged by a being known as the Dark Lord, who wields the power to steal the faces from the world’s Mii’s and places them onto monsters. After being given an ancient artifact from a resident of the town of Greenehorne, and getting attacked by a monster, you are spoken to by a being claiming to be a god. After dispatching the monster, you are chosen by the god to defeat the Dark Lord and save the world of Miitopia. The story is very textbook and basic, but that’s the idea. It’s not trying to be anything unique and is simply trying to do a fun and, admittedly, adorable story, which it fully succeeds in doing,

As to be expected, the graphics have been seriously improved. Not only are the character models a lot smoother, but the lighting effects also help to enhance the visuals. The music is exactly the same as in the 3DS version and it’s just as good as it was there. Strangely enough though, despite the game not being the most graphically intense, it doesn’t run that well. There were numerous times in the game, mostly during the outing scenes, that the frame rate dropped significantly. What’s even more baffling is that the 3DS version didn’t have any frame drops at all, so what made this have them I have no idea.

This game plays like any traditional turn-based RPG… kind of. Rather than being able to control the actions of every character in your party, you’re only able to control your own Mii’s actions and everyone else acts on their own. It adds a level of randomness to the game that you would think would get tiresome quickly and lead to frustration. While it can be a little bit frustrating at times, like when a party member attacks an enemy that you weren’t wanting them to aim for, those cases are few and far between and you’ll find that they’ll quite often do the actions that you’re hoping for.

To get to these battles you travel to different areas in the map and essentially have your Mii’s automatically walk down a linear path with the occasional branching path and fight in predetermined battles. During these moments, you’ll at random points see your party members interact with one another, from random conversations to moments that affects one another’s relationship. You’ll also find yourself running into treasure chests, that will contain money, healing items, or weapons and armour with the bigger ones.

After a day’s travel, your Mii’s will rest up in an inn. While in the inn you’ll be able to directly interact with the Mii’s. You do this by having them visit one anothers room to help increase their relationship, giving them food to increase their stats, buy them armour and weapons if they request, and play minigames with Game Tickets for the chance to win more money, more food, more exp, or some equipment.

As you play the game, you’ll slowly get more members added to your party. When you get a party member you’re able to create and design how they look or you can pick from a variety of Mii’s created by other players by typing in their access keys. From there, you’re able to select what job you want that character to be, some are your traditional RPG classes like Warrior or Cleric, though most of them are ridiculous joke classes, like Chef, Cat or Pop Star. You also pick from a small selection of character personalities as well, which at random moments during combat will have the character do a certain action that’s reminiscent of the personality chosen for them. Like someone with the kind personality protecting someone from an attack, or someone with the laid-back personality hiding behind someone to avoid an attack (Ren did that one a lot, d***).

Speaking of creating your Mii’s, you’ve likely seen how insane character creation in this game is. The amount of detail you can add to the Mii’s you create is staggering, and easily outdoes most character creation systems in other games. Though one thing that I don’t like is that you can only gain access to someone’s creation by typing in their access key. In the 3DS version of the game, all you had to do was type in the name of the Mii you’re looking for and you’ll find a small collection of Mii’s with that name. With you having to find not only the character you want, but also the access key to be able to use that character, it just adds more steps than necessary.

A big dynamic of the game are the relationships between the Mii’s in your party. By sleeping in the same room, aiding each other in battle or during random moments in the game, the relationship between your Mii’s will increase and level up. At each level they’ll gain extra abilities with one another, such as showing off, where the Mii deals slightly more damage, helping hand, where that Mii will do an extra attack on another Mii’s turn, or sacrifice, where a Mii will take a hit for another that would otherwise be fatal. Though at the same time, Mii’s can also have a falling out with one another. If that happens it’ll lead to confrontation during battles, which would often lead to negative effects. A new feature to increasing Mii relationships is the Outing Tickets. When given to two Mii’s sharing the same room at the inn, you’ll get a cute little cutscene of them interacting, that will often increase their relationship by a significant amount.

One of the new features in the game, and arguably the best one, is the horse. Early into the game you’ll find a horse that you tame and will travel with you during your adventure. You can fully customize your horse and, just like with the Mii’s, you have an insane amount of options when it comes to designing your equine friend (personally I made mine look like the Bicorn enemy from the Shin Megami Tensei and Persona franchise). Your Mii’s can interact with the horse and increase their relationship with it, doing so will give you benefits to you during combat, allowing your Mii to ride on the horse’s back to deal more damage for a single attack, or to get through areas a lot quicker.

The one main problem that I have with this game is that it’s not exactly one that you can spend hours on. It’s more reminiscent of Tomodachi Life, where it’s more something that you pick up and play in short bursts rather than something for you to play for hours at a time. I found myself only really able to play for a couple of hours at a time, not because I thought that the game was grading, because it absolutely wasn’t, but because I felt like I wasn’t interacting as much as I was in other games, which left me winded a bit faster than normal. Though this is ultimately a slight nitpick and didn’t retract from the enjoyment that I had with the game.

This may be embarrassing to admit, especially for how simple the game is, but the original Miitopia is one of my favourite games of all time, and this game is an excellent port of it. While there are some things in the original that I do think they did better, I cannot deny that this is ultimately the superior version of the game from all the things they’ve added and improved upon. In my opinion this is definitely a must have for any Nintendo Switch owner, and I urge you to give it a go, especially if you’re a fan of the original game.