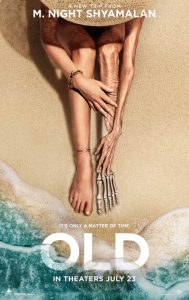 Old is the latest film written, directed and produced by M. Night Shyamalan. However, unlike his previous projects where he maintained almost complete creative control, this is not his own concept. Shyamalan is adapting a French graphic novel named ‘Sandcastle’, which I was not aware of prior to watching the film. However, for the record, I have looked up the graphic novel post-film and, from what I gather, in terms of the plot points, it is a faithful adaptation. Now, most people know my opinions on Shyamalan, as I have reviewed two of his films for this site: The Visit and Glass, (the latter of which I really did not care for). Now, Shyamalan rarely creates adaptations, so how does it work out when Shyamalan must put his own stamp on something?

The plot of Old describes a family going to a resort, whereby they are offered to visit a secluded beach by the resort manager on the other side of the island (something he only offers to his favourite sorts of customers). When they arrive there however, after they find a dead body, they decide to try and leave the beach, only to find that they cannot escape. They then begin to notice that the kids are ageing quickly—after a few hours they have gone from looking six years old, to looking like they were eleven. They realise that for every half an hour they are on the beach, they gain a year in their life, and that there is some sort of force preventing them from leaving. The concept of Old is really good. I know it sounds ridiculous, but it does kind of have that sense of horror with the idea of ageing very quickly.

However, Shyamalan is really being Shyamalan here; you can tell that he wrote the script. Honestly, if I did not know this film was his idea, I would have still believed it was because includes all the hallmarks of his films; the terrible hokey dialogue, the strange characters that seem to act kooky for no reason, and some plot holes you could drive a bus through. I am not going to go into spoilers for anyone who wishes to see this film, because there are actually some people who will enjoy this kind of film, and I have always said that no matter how bad the film I saw was, I would try to keep things spoiler-free. Interestingly, something that got pointed out to me post-film is that when they first arrive at the beach, they meet a rapper named—and I am not making this up—’mid-sized Sedan’, who has been on the beach since the previous night (waiting for his friend to return from their swim), but it does not seem like he has aged at all overnight. The rules therefore seem rather inconsistent.

There are several moments where things to quite happen in the way you expect. For example, the story is very consistent about how the children are physically ageing but seem to go back and forth on whether they are emotionally ageing as well. The two main children are eleven and six when they arrive, and the daughter of another couple (who is also six), turns up on the beach, but they do not seem to act like it at times. The film fails to mention that you emotionally mature over experience and, yes, they are getting a whole lot of experience over a short time period, but it is weird. The characters do not speak like human beings at all—they constantly remind you of their professions. For example, the father of the main children, ‘Guy’, played by Gael Garcia Bernal, constantly reminds people that he is a surveyor who does assessments for insurance companies and constantly spouts out statistics. And the dialogue surrounding the doctor played by Rufus Sewell is really bizarre, especially considering what the directors are going for with that character.

If there is one thing, that I will praise about the film, it is the fact that the actors actually do resemble each other quite well. They did a very good job choosing a cast that look like each of their counterparts and looking like they are going through various stages of life. It is kind of weird because they only seem to have put a few stages of life in there: pre-teens, teenagers, and then full-blown adults. But I will say the ageing makeup that was used on some of the actors was great, even if you can tell it is just ageing makeup. It is one of those instances where you can sort of see the process to get to that stage just by looking at it.

Now, Shyamalan’s writing once again means that a bunch of moments that are supposed to be very frightening, end up inadvertently hilarious, to such an extent there is a sequence later in the film where I had to stop myself interrupting the entire cinema because I was nearly pissing myself laughing. I looked around and was thinking, “How are you finding this scary? This is unintentionally hilarious as hell!” The film does have a nice message about enjoying the time you have in the moment, but I do not think it executes it as well as Shyamalan would have liked.

Additionally, there are some uncomfortable scenes to watch. There is one that admittedly was in the graphic novel, but I kind of wish Shyamalan would have cut it because even though you fail to see what happens, just the implications from what you do see, makes you feel like you really do not want to be watching this. This film is also shot appallingly; some of the basics of cinematography were not followed. There are characters that are cropped out of shot, so they are not centered very well. And this film loves long shots, but I do not understand why you would have long shots for these scenes; they do not maximize the tension, or ‘show off’ some choreography that makes something feel real, it is more just because they can. In my opinion, there were no shots where I thought you could not have cut or changed a camera angle; I never thought it had to be a long shot. Additionally, they have tons of those terrible shaky-cam running scenes that I am so sick of now. I thought we grew out of this!

Also, as you would expect with a Shyamalan film, there is a twist, and I managed to successfully guess it in the first five minutes. Not all of it, mind you, but a significant part of it. And that is the thing about Shyamalan films now: I do not feel like I am watching them to let the story unfold; I am instead watching them, trying to guess whatever strange twist is going to happen, and as a result, you realise you are not paying that much attention to what is going on with all the characters. In his better films like The Sixth Sense and Unbreakable, the plot twist is actually really pushed to one side; there is more focus on the characters, so you are not trying to think of what the twist could be. Granted, those were his first two films, so he was not known yet for plot twists, but my point still stands. If you go back and watch those films, you will fully see my point.

Old is a really good concept for a film, but Shyamalan has put so much of himself into it, that I do not think he is aware that he was not really pulling it off. The writing is poor, the acting is not great, the cinematography is all over the place, and the film is just remarkably weird. I think many other writers and directors could have taken this on and done a decent job with it, but this is the film I watched, and this what I have got to review. And, again, I cannot ignore the fact that there are plot holes through the roof when you really stop and think about this film. Normally that is not an issue if things are kept mysterious, but this film goes out of its way to explain everything that is happening and offer possible explanations, and as a result, those plot holes are pushed more and more to the front. As for the twist, it is not the worst of a twist in a Shyamalan film, mainly because he did not come up with this one—it is in fact the exact same plot twist from the graphic novel—but it is also not one of the better ones from his films as it opens up to several questions. The film is kind of a mess but as a whole, you can do a lot worse. Overall, it is not a train wreck, but it is not really a good film either, and it is certainly not as bad as The Happening.
Calvin – Nerd Consultant
Share This Post: