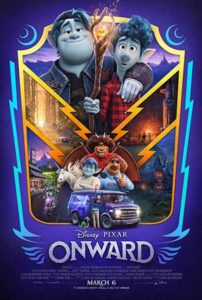 Yes, I was meant to see The Colour Out Of Space but to my shock, not a single cinema in my area was playing it, and I’m not about to hop on a train to London for one film when I’ve just done a busy weekend of work, so I decided to just go down the cinema and see the first film that was on. Fortunately for my benefit, because we had a leap year this year, for whatever reason, Pixar were doing special preview screenings of their new animated feature Onward, so I decided to check it out a week earlier than I had planned.

Onward has been advertised for quite some time; it’s one of Pixar’s recent announcements of upcoming original projects that will not be sequels, the other being Spirit which will be coming out in the foreseeable future. Onward is directed and co-written by Dan Scanlon, who has been involved in several Pixar projects but has only directed Monsters University prior to this, a film that I did not think favourably of. Now, Onward is the story of Ian Lightfoot, played by Tom Holland, an elf trying to adjust to his new life in high school and being a bit more socially active after turning 16. However, on his 16th birthday, his mum (played by Julia Louis-Dreyfus) hands him and his big brother Barley (played by Chris Pratt) a staff and a letter from their father instructing them that before he got sick, he learned a spell to bring him back for one day once the boys had grown up. Ian tries to do the spell with his brother, however it doesn’t quite go according to plan and only brings back his legs. With that, the boys set out on a quest to get a Phoenix stone to revive the other top half before he leaves the land of the living after the next sunset.

Okay, this film is very similar to the Netflix production Bright which involved the idea of a Lord of The Rings style world existing in the modern day, but whereas that film was rather lazy with its premise and didn’t think its world history through, Onward definitely does think its history through – it explains the beginning quite well, why magic isn’t really used by the masses at this point in time (electricity and gadgets are simply a lot more convenient). This has been an idea that’s been going through recent fantasy fiction that tries to have fancy settings in our modern lifestyle. I think this is possibly as a reaction to a lot of criticisms about the lack of technological items in Harry Potter, despite the fact that it was explained in those stories why the technology isn’t really used. Most recently, this idea was explored with Little Witch Academia, a highly recommended Netflix series, and while Onward doesn’t quite reach the heights of that in the science vs magic idea – coming almost firmly down on the side of magic – it actually does a very good job blending the two together, certainly better than Bright did.

Whereas Bright felt like it was more of a homage to Lord of The Rings in a rather lazy way, Onward is a love letter to Dungeons and Dragons. Barley is obsessed with a game that’s similar to Dungeons and Dragons and even the rules around magic and how quests work is in line with how Dungeons and Dragons works, with the ideas of having to think outside the box and not necessarily approach it through the most logical way since, well, it’s magical fantasy – it’s not going to be the logical thing in the world. Take it from me, if anyone’s ever played Dungeons and Dragons with particular Dungeon masters, you know that some of them can set up really stupid traps that you would have no way of thinking your way out of, and you have to come up with the most ludicrous ways to get out of it. This movie attains quite a bit of that, and it’s very clear that the team actually did do their research if they weren’t already long-time Dungeons and Dragons players. It’s actually kind of an interesting film all things considered. While it sort of starts out as being a story about fathers and sons, it then kind of evolves into a story about brothers and brotherly love. And it’s quite interesting seeing Barley and Ian’s personalities play off one another. Chris Pratt and Tom Holland actually do have good chemistry together in this film, though part of this could have been down to their screen-time they shared together in Avengers Infinity War.

The thing about Onward is that it definitely feels like the sort of film that if it had been very poorly thought out, it would have failed instantly, but the writers definitely put a lot of thought into the world building as well as the character drama. I actually thought this film was going to be way more predictable than it turned out to be, and I was genuinely surprised at times with the directions it went. It doesn’t do anything bold per se; we’re not talking something like Inside Out, but it still doesn’t exactly pull punches and I actually kind of found many aspects of it a lot more mature than I was expecting a film like this to go. The performances themselves are actually really good – Tom Holland’s doing a really good job, as well as Chris Pratt. Their voices do stand out a bit in that way that celebrities voicing animated characters can often do, such as when Tom Holland’s using a very similar voice as when he plays Spiderman, and of course Chris Pratt has one of the most recognizable voices now that he’s been in both Jurassic World and Guardians of The Galaxy. But most of the cast is made up of voice actors, the only exceptions being Julia Louis-Dreyfus – who gives a decent performance – and Octavia Spencer who plays the Quest Giver aka The Manticore, and actually she’s one of the funniest parts of the film. The rest of the cast are alright, but they don’t really do much.

There’s an antagonistic force that’s introduced later in the film, but it doesn’t really do too much and it’s almost like you can blink and you’ll miss it. There’s also been a lot of talk recently about the fact that this is the first Disney film to have an out, openly gay character. Trust me on this one, it’s also another blink and you’ll miss it; I actually completely forgot about it prior to seeing the film, and then I only remembered because of one throwaway line in the middle of the film, whereby I thought, ‘Oh yeah, right, that’s the first openly gay character in Disney history and she was barely on screen and didn’t do much.’ Sarcastically in my head I was just thinking, ‘One for the history books!’ Though obviously, this is a positive step to potentially future films going much further. I certainly think that they did a better job this time than Disney did with LeFou in the Beauty and The Beast remake, though that film was a garbage fire anyway, so we’ll try to pretend it doesn’t exist. It is great to see that there is respectable representation in these sorts of films.

Now that being said, I found the runtime rather bizarre – this film has a total runtime of an hour and 42 minutes, about average for kids’ films, but I think we initially intended for this film to be a two-hour film given that many plot points feel rather rushed and I can imagine there’d be a bunch of ideas that got stuck on the cutting room floor. That being said, the animation was definitely not skimped on; this film’s actually very well-animated, though it’s also not pushing Pixar too far. I saw a trailer for Spirit prior to the film and finally getting to see that on the big screen really showed me how much effort is going into the animation for that film compared to this one. It definitely feels like their budget might have been cut for this one, to go into Spirit. Though that being said, it is not a badly animated film by any stretch of the imagination – we are not talking Playmobil: The Movie levels bad.

Onward is a surprisingly charming film that is a love letter to Dungeons and Dragons and is an excellent story of brotherly love. It might feel like a bit of a squeezed and cliched plot, but I actually found myself enjoying this one and I felt like it had a rather mature take on what is a bit of cliched story. It’s not perfect by any stretch of the imagination but it does show off the talents that Pixar have when they’re at their best. And if having to endure rather lackluster sequels means that we’re getting more films like this, well then, they are kind of worth it. I really would recommend going to see this one; you will not be disappointed if you get to see it.

Well, that’s it for me for another week. Next week, I’m going to see another Blumhouse movie! This time it’s going to be their reboot of Fantasy Island. With all that being said, thanks for reading this review. I hope you enjoyed reading it as much as I enjoyed writing it.
Calvin – Nerd Consultant
Share This Post: