Pirates of The Caribbean: Dead Men Tell No Tales – Review 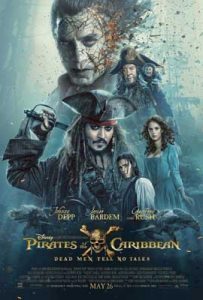 “PIRATES OF THE CARIBBEAN:
DEAD MEN TELL NO TALES”

Ok before we go any further I already explained last week but I refuse to call this film by its international title (Salazar’s revenge). I love the first pirates of the Caribbean movie it’s one of my favourite movies. I’ve always said it’s the perfect example of how you do a fun summer blockbuster, it’s well written, has great action sequences. It also gave the world Captain Jack Sparrow one of the most recognised and loved characters that earned Johnny Depp a Best Actor Oscar nomination. What more can I say I love that movie, the sequels on the other hand are not so great in my opinion, the second movie Dead mans chest is ok for the most part including a fantastic 3 way sword fight but suffers from having way too much of a complicated plot and pushed Jack Sparrow way too close to the forefront, the 3rd movie At Worlds End makes the mistake of adding even more plot on top of what we already had (emphasised by the DVD having a FAQ booklet so you know it’s way too confusing) and gives a truly boring movie coming in at nearly 3 hours as a result of the fact that it started shooting without a completed script, and the 4th movie may have made minor improvements but it’s also seriously forgettable. I think the biggest problems with these films tend to be that the writers think that they’re making an epic when Pirates of the Caribbean is just meant to be a simple adventure film. I was hoping the 5th movie would break this curse despite the trailer not filling me with confidence but let’s see how it turned out.

The plot of pirates 5 Is that Will and Elizebeth’s son Henry (played by Brenton Thwaites) is determined to break his father’s curse from the flying Dutchman by finding the staff of Poseidon that is said to be able to break any curse of the sea. After a botched bank robbery he joins Jack Sparrow (played by Johhny Depp) and his crew followed by an astronomer Carina (played by Kaya Scodelario). But there’s another problem former pirate hunter Captain Salazar (played by Javier Bardem) has returned from the dead and vowed revenge on Jack for defeating him and cursing him.

Ok let’s get a few thing off the bat I got really ill after watching this movie and even now writing it I’m not fully recovered so please bear with me if this review is shorter than usual.

Let me start by saying that I think that my girlfriend (who is refusing to watch the Netflix Death Note movie) loved this film and I respect her opinion however I don’t fully agree with her. The biggest problem with this film is that it borrows way too much from the previous movies particularly the first one. It really likes to pull on nostalgia for the series which considering how far the sequels got away from the original seems like a good idea in theory but because you can tie almost every moment in this movie back to one of the previous movies it means that this movie really doesn’t have an identity of its own. For example there’s scene where the undead guys run across the ocean which feels like a complete copy of the undead pirates walk along the ocean bed in the first film. Even the new characters feel like copies of previous ones, Henry and Carina are very much the replacements for Will and Elizabeth but their personalities are so bland that they can’t leave an impact like those characters did. Henry trying to free his father’s curse is incredibly similar to the 2nd and 3rd films plot with Will however it doesn’t have the same impact and there’s an attempt to give Carina a personality with a plot twist later on in the film but it fails completely. In fact, that plot twist was one of the real turning points in the movie for me cause it was at that moment I realised how much it resembled a fan fiction though for avoiding spoilers I won’t go into details about it. The only thing I can really think of that feels very original is the opening sequence involving the bank robbery even though it feels like it comes from the land of F.U. physics.

The film also falls into the trap of overdoing it with Jack Sparrow. the thing that made him great in the first film was the fact that he was somewhat restrained and they showed that despite acting like an idiot he was a bit of an idiot savant but still planned his strategy in advance. Much like the sequels you really have to wonder how he managed to survive this long. Jack Sparrow in this film once again feels like he’s trying too hard however he obviously still gets a funny line in every so often

The villain is another weak point he’s not a complete Barbossa clone but I would be lying if I said I didn’t make the comparison though at this point I don’t think there’s been a main villain in the franchise that hasn’t been an Undead character. He has a decent backstory and feels like enough of a threat but he’s just not quiet interesting enough to leave an impact

Now while those are my complaints here’s my positives the film has one thing I felt the other sequels didn’t have, I ultimately found it entertaining. Yeah this one to me has been the best sequel through the virtue of having a bit of fun and just doing a simple treasure hunt story and having a few funny gags that made me laugh. It’s one of those films where you know there’s a lot wrong with it but you still somehow get some enjoyment out of it.

Which brings me to the cast. Once again Johnny Depp and Geoffrey Rush are the best parts of the film giving fantastic performances, Javier Bardem once again proves why he makes a great villain actor and I enjoyed a lot of the performances of the returning cast members from previous films. Brenton Thwaites is really bland though his character isn’t that well written so it’s not entirely his fault so I wouldn’t hold that against him too much. Kaya Scodelario I actually mistook for Kristen Stewart, not only do they look alike they but she even performs her role like Kristen Stewart and if you’ve heard my opinion of her acting you’ll know I won’t be that impressesed with that. the only other major cast thing to talk about is the baffling Paul McCartney cameo as Jacks Uncle, presumably because Keith Richards wasn’t available to play Jack’s father again. The cameo itself has its moments but like much of this film it feels like it’s trying too hard.

As for the effects they’re actually pretty good for the most part and with a couple of exceptions the action scenes are well shot. The editing is decently done and I love the music scores of all these films including the returning main theme which is my favourite movie theme ever, challenged only by Jurassic Park.

The one thing I will say is see it in 2-D. While I haven’t seen the 3-d version some of the scenes are in such dark environments I bet it would be impossible to see anything because of the darkening effect the glasses have.

Pirates of the Caribbean Dead men tell no tales is an ambitious effort to return the franchise to its root that ultimately only gets there through sacrificing originality. I did enjoy this movie more than the other sequels however I would hesitate to call it a good movie. It will be enjoyable to anyone who loved previous films and really I think that’s all that matters.

Well I’m sorry this review was not up to my usual standard but thanks for your patience with me.

I should be back on form next week when I give my thoughts on DC latest film Wonder Woman.