A Boy Made of Blocks 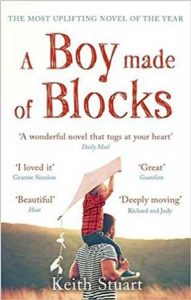 “A Boy Made of Blocks”

by Keith Stuart
Published by Sphere

As part of Calvin’s role of self-proclaimed Nerd Consultant, he likes to keep up with any Television programmes that are important to Nerd Culture.

He watches a particular programme, hosted by Dara O’Briain, called ‘Go 8 Bit’ and he has an off-shoot programmed DLC programme and various gamers compete against each other.

More recently Keith Stuart, who writes the Guardian column around gaming appeared and spoke about one of his sons being Autistic. He then explained how both Keith and his two sons started playing video games together, especially Minecraft. Keith had always played games and since 1995 has been writing about them.

The powerful creative sharing as a family and the blossoming communication that followed informed his debut novel ‘A Boy Made of Blocks’, a story about a dad who wants to communicate with his Autistic son, a dad who has forgotten how to play, is a story about letting go, about being a kid, which is how Keith learned about everything important in his life, starting with his son.

His son is described as follows:

“Meet eight year old Sam, beautiful, surprising and different. To him, the world is a frightening mystery, but as his imagination comes to life, his family will be changed for good”.

It is described as a beautiful, funny and uplifting story of family and love inspired by the author’s own experiences with his son. I haven’t yet read it, but thought I would alert people as this may be a book that people would want to take away with them on holiday, which is probably what I would do.
Thank you to Cal for bringing it to my attention.
Dr. Linda Buchan
Consultant Clinical Psychologist
& Director of Axia ASD Ltd.
Share This Post: