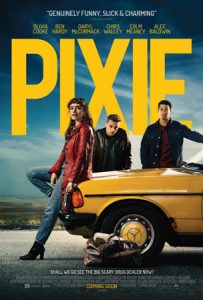 Pixie is yet another film that has been brought to cinemas in the wake of an industry gasping for air, while big companies hold out their releases that have made the rounds last year, and is hoping to make back some of its money on a rather weakened cinema line-up. The film is written by Preston Thompson and is directed by Barnaby Thompson, and honestly this was one of the films that was very hard to escape advertising – I saw a trailer for this in virtually every single screening I went to see. And it looked like possibly the most Irish movie ever. No joke, in every single trailer they wanted you to know exactly what country this film was made and filmed in.

So how did it turn out?

Well, Pixie as a film is a very basic plot. It’s essentially kind of a roadtrip/heist movie involving a couple of lads (played by Ben Hardy and Daryl McCormack) who accidentally kill a guy and discover that he had a bag full of tons of MDMA, and ask the daughter of a local gangster, Pixie (Olivia Cook) to get them out of this jam. In the meantime, she’s got her own plot going on, and there’s also now a potential war going on over the botch between Pixie’s father (Colm Meaney) and a group of gangster priests led by Father Hector (Alec Baldwin). If that plot sounds insane it’s because it is. And it probably brings you back to one director in particular if you’re aware of his films. Yep, the Tarantino influence is all over the place. This film really wants to be Pulp Fiction.

Now, Tarantino does quite well with large casts in giving everyone something to do, but many of his imitators have not succeeded in following on from that. Pixie is somewhere in the middle; it doesn’t exactly fail in that regard but you can definitely tell some of the bigger actors in this film were not on set for long. Hell, Alec Baldwin is pretty much in the film for about only 10 minutes. I swear he must have not been on set for more than a few days. Also, unlike a Tarantino film, this film is not 2 ½ or 3 hours long but actually a brisk hour and a half, which really suits it. This film doesn’t really have enough going on to justify being longer; they wisely made the decision to make this a brisk runtime. The plot is somewhat easy to follow but it also has a bunch of bizarre moments and a couple of plotlines that go absolutely nowhere. One of the bigger twists in the film I thought was so obvious it couldn’t actually be the actual answer and that they were going to surprise me. But no, yep, they went with the obvious one.

I also really think they were counting on us banking a lot on the likeability factors of these characters but they’re not the most likeable characters ever. They basically all in some way got their hands dirty, but I think the film expects us to sympathise with the lads played by Hardy and McCormack, of whom IMDB hasn’t even bothered to list their characters’ names. And their personalities are actually rather forgettable; they’re basically defined by single traits – Ben Hardy’s character is basically the ‘jack-the-lad’ and Daryl McCormack’s character is ‘the-guy-who-went-to-University-who’s-clearly-in-way-over-his-head’.

I will say though, the film is definitely strengthened by a very strong central performance from Olivia Cook. She actually does make the most of the material she’s given and I thought her performance was the real big saving grace of the film. Ben Hardy also seems to be really coming along with his performances. You might recognise him from some of the bigger films he’s done since moving on from his role in EastEnders, mainly that of his brief role in X-Men: Apocalypse and two years ago playing Roger Taylor in Bohemian Rhapsody. Daryl McCormack actually gives a good performance as well in this film, which will be good news to fans of Vikings who enjoyed his performance in that show. But the rest of the performances are rather so-so. Most of the characters who are meant to be menacing don’t really come off that way because the writing is trying to also be half-comedic, which really doesn’t benefit their nature. Mind you, it’s going to be very difficult to be menacing when you’re the leader of a bunch of gun-toting priests and nuns.

And that’s really what I think bogs Pixie down: it’s rather absurdist in its nature but also seems as times that it’s trying to be a very serious film, which feels like a tonal clash throughout most of the movie. It doesn’t do as good of a balancing act as, say, Tarantino has done. Even then, I’m kind of getting sick of Tarantino constantly making those kinds of films; I’d actually kind of like the guy to branch out a bit more for his next film… And if you think I’m mentioning Tarantino too much considering he had nothing to do with this film, it’s only because the filmmakers of Pixie are constantly reminding you throughout the film of other movies that you’ve seen. Especially considering that there are a bunch of cameos from people you recognise from other films and TV shows like Ned Dennehy from Good Omens and Peaky Blinders, and Dylan Moran from Black Books and Shaun of The Dead.

But that being said, I did find myself enjoying this film because it seemed to have a lot more heart than, say, a lot of films that intend to cash in on the formula that Pulp Fiction put in place. And the cinematography is actually really good. While the editing’s not the best in the world—in fact, I actually think this film had some real editing mishaps—the cinematography really does do a good job bringing out the Irish scenery, which is a lot to say considering that most of this film is set in the Irish countryside.

Pixie is a decent film all things considered, that wears its influences front and center, but I would not say this is a film that’s good enough to suggest you really need to get back to cinemas to see it. This feels like a rental for a movie night, but you’re getting a good one. It kind of felt a bit random at times but it’s strengthened by some strong central performances, particularly that of Olivia Cook. So I would recommend checking this one out at some point.
Calvin – Nerd Consultant
Share This Post: