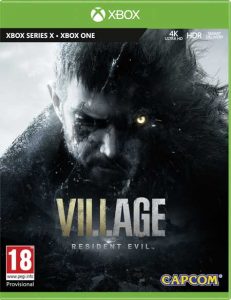 Resident Evil series. Village is once again in a first person perspective like Resident Evil 7, likely to once again push a VR component that’ll be added in an update. This one takes place a few years after Resident Evil 7 with returning protagonist Ethan Winters traveling to a mysterious village to rescue his daughter from a cult that has taken her after the murder of his wife. The village is once again full of mysterious monsters including 3 vampiric women (one of which has already broken the internet with her reveal) and you’ll be fighting back with a variety of guns with the survival horror aspect of the game having you manage resources to make it to the end of the game. Do you use a healing item now or leave it longer and do you shoot now or run and save your bullets for later. Given how well received 7 was and how much Capcom is hyping this game up the question becomes what has Capcom done with new tech at their disposal.

Resident Evil Village is another very well made game and certainly lives up to the legacy of its predecessor in many ways though doesn’t quite have the same impact. While I’m not a fan of the guarding I did enjoy the combat and the fact that the series can still scare me shows that the series has some of it’s survival horror roots. The game succeds again in making great environments and making you think about your actions and while it’s not going to be considered the best game in the series by most fans it still is a real highlight and is a good middle point for what is a planned trilogy with Resident Evil 7. If you’re still on a big RE7 hype this will work well for you

If you are going to buy it I would recommend you only buy it if you played Resident Evil 7 since it is a game very much under the impression you’ve played that game and some online shops do offer both games as a double pack
Calvin – Nerd Consultant
Share This Post: