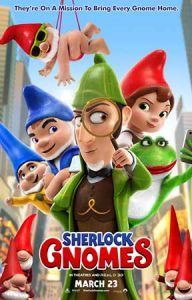 OK, you guys all know that this film is not that good, so you won’t be surprised that this is a shorter than usual review.

Sherlock Gnomes is a follow-up to Gnomeo and Juliet, a film that I am baffled is getting a sequel. Were people really crying out for the Gnomeo and Julie sequel, it’s been seven years since it came out and in that time the target audience for it grew up! Now I am not a big fan of the original, Gnomeo and Juliet, it’s a pretty bad film all things considered. I know a lot of people say it’s a perfectly serviceable film, but for me it is a prime example of a marketing stunt and going with a title over a well done script. Sherlock Gnomes looked like it was going to be very much the same thing, although, having seen some of the trailers for films coming out later this year, I’m not sure it is going to be the worst film I will see this year. God help me if I have to go and see Show Dogs! Do we not learn our lesson from Nine Lives, talking animals is something we all grew out of in the nineties?

Sherlock Gnomes is another film being done through Elton John’s production company, which is one of the reasons I think it is receiving so much of a push. Now the film has been out for quite a while in America and already received a bad press before it got over here.

The plot is very much what you would expect. Taking place years after the events of Gnomeo and Juliet, they are moved to a new garden, which is now going to be led by Gnomeo and Juliet, being reprised by James McAvoy and Emily Blunt and then there are a bunch of filler scenes that do not add much to the plot and supposedly Moriarty, who in this version is a pie mascot, played by James Demetriou, decides to take several gnomes from gardens and it is up to Sherlock Gnomes and Dr Watson, played by Johnny Depp and Chiwetel Ejiofor to get them back, with the help of Gnomeo and Juliet, who are supposedly going through young couple problems. It’s as basic as a kid’s film gets!

Do you know what is amazing about this film? It was so disengaging, I actually guessed the first plot twist in the first two minutes! That’s a record for me!

Sherlock Gnomes if another fine example of what Gnomeo and Juliet had, which was that they came up with a title and then wrote the script around it in which in script writing terms is the equivalent of jumping out a plane without knowing if the parachute actually works. What’s amazing is that it is even worse in this version. I actually listened to Mark Kemode’s review before seeing this one and he described the film as being unengaging, which is the prime word for it. This isn’t even going to hold the attention of its target audience. There were several small children with their parents in my screening and they didn’t even seem like they cared. One kid actually ended up walking up and down the aisles. Great movie guys, you can’t even entertain a five year old, and I have seen what is on Nickleodeon, they are not hard to please. The film plays entirely to children, parents are going to get nothing out of this outside of the very strange cameo’s, most of which are from actors that have been wheeled back in out of contractual obligation. Including, Michael Caine, Matt Lucas, Stephen Merchant, Maggie Smith, Julie Walters, Richard Wilson and even James Hong is in here. What’s weird is that Ozzy Osbourne is one of the better performances in the film and he doesn’t even need to try.

The film has a laughably poor script. It has clearly has had little effort put into it. In the last film, the plot actually had some clear ground rules, since it was just the garden ornaments that came to life. This one, goes so far as having tons of things coming to life, including salt shakers and even Gargoyles, one of which is rather weirdly played by Dexter Fletcher, who should know better than to be in this. As for Stephen Merchant, I just think he is trying to outdo Ricky Gervais’s record for terrible films. For god’s sake man, get some dignity, between this movie 43 and Tooth Fairy, are you trying to kill your career? You are a funny man! Mind you, he has probably made enough money of Lip Sync Battle so I know that it’s not his finances that aren’t in order that he is in this.

Again, the actors that are in this really reek of contractual obligations. Julie Walters and Richard Wilson barely have a role this time around. In fact, even Gnomeo and Juliet feel like side characters. The film is trying to parody Sherlock Holmes, which I would have been fine with, a Sherlock Holmes parody would have been great, except it doesn’t fully commit to it and decides it wants to be a straight Sherlock Holmes tale for kids. OK, that’s great, except the entire time I have been saying that there is already a kid’s version of Sherlock Holmes and it is called Basil the Great Mouse Detective. What’s more, it is one of my favourite Disney films. Seriously the Great Mouse Detective is an excellent example of how you take a rather adult story and transfer it to a medium that the entire family can enjoy. It did a good job of taking its literary source and adapting it for its new target audience. It had a really great way of showing how clever the character was and it did it all very well and in a good running time. Plus, the film is entirely worth it just for Vincent Price as the villain. Now Basil the Great Mouse Detective was trying to be very similar to a period drama, similar to the ones that are shown in America and on ITV and did a pretty good job of capturing the look and feel of them. Sherlock Gnomes is trying to half do that! But it’s also trying to add in elements of the BBC version with Bennedict Cumberbatch as Sherlock and is clearly banking on that. This is especially evident in Moriarty, which is clearly designed to be a tongue in cheek take on Andrew Scott’s slightly camp version on this one, except in this version, they have dialled it up to eleven, he is of the most annoying characters I have seen all year and is about as threatening as a Chihuahua in a Tutu, except, unlike a Chihuahua in a Tutu, I want to hit him over the head with a baseball bat, several times.

What’s more, the characters have no progression throughout the entire film. Sure, they make out that they have done that, but when you really analyse it, not much has actually changed, so the whole film feels pointless by the end. They try to throw in a few references to previous Sherlock Holmes stories, but I couldn’t spot any in particular other than references to the Reichan Back Falls, which is where Sherlock and Moriarty have their final confrontation. Plus, there is actually a second twist, after the first twist, which renders the entire first twist completely and utterly pointless. You know what was good about the Great Mouse Detective? They actually planned out the plot and everything had meaning! In this one, the first plot twist is so entirely pointless, you could have taken it out of the film, changed it up slightly, and it would have made no difference.

Johnny Depp is clearly doing this because he has realised his career is in decline and after this, I will be amazed if he has a career altogether. He is so half-hearted in this performance it is unbelievable. In fact, he is actually doing a voice similar to his Mordecai voice, which is frankly a film you should not be reminding me of. Chiwetel Ejiofor, what the hell are you doing, you are under no contractual obligation to be in this film and you are a decent actor. For the love of god, you have already done your career obligated appalling film with 2012, you didn’t need to do another one!!

Sherlock Gnomes may not be as bad as Norm of the North, The Emoji Movie or even Trolls, but it is still another appalling film aimed at children and there is nothing for their parents. In a week when we got the release of Mary and the Witches Flower, this is a film you should not be taking your kids to. For the love of God, take your kids to see Mary and the Witches Flower, it’s not as great as all the other Studio Ghibli films, which many of the animators that worked on that film also worked on, but it will give you something to work with.

For the love of God, do not take them to see this film. The gags are terrible, in fact it would blow a Gnome pun meter within the first three minutes with puns like Game of Gnomes and Spiderman Gnomecoming. These come off more of threats that they are going to make more sequels out of this. Just, NO!! No one asked for this and no one cares. I am hoping this film gets forgotten and dies a horrible death! Children deserve better than this movie.

Fortunately The Incredibles 2 is out in a few weeks, that will save us all, hopefully.

OK, I need a palate cleanser. Next week, Deadpool 2.

Thanks a lot for reading my review. I hope you have enjoyed reading it as much as I have enjoyed writing it and for the love of God, just buy a DVD or rent a DVD of Basil the Great Mouse Detective, or get it on Netflix or something, it’s a much better way of doing a Sherlock Holmes story for kids and it has got VINCENT PRICE in it.
Calvin – Nerd Consultant
Share This Post: