Spider-Man: Into the Spider-Verse – Review 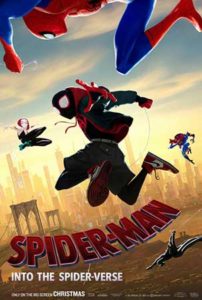 “SPIDER-MAN: INTO THE SPIDER-VERSE”

We now live in an age where there has now been 7 Spider-Man movies gone to cinemas, that is insane. It’s even actually caused people to ask the question, has there been too much Spider-Man over kill. Spider-Verse is pretty much Sony’s attempt to keep whatever piece of the Spider-Man license they have left, now that Marvel seems to be going full steal with Spider-Man in their cinematic universe. In order to make this one stand out, this would be the first time a Spider-Man film is led by Miles Morales, the character who took over from Spider-Man in the ultimate universe following the story line; the death of Peter Parker. At the time it was a big deal, the person in the role of Spider-Man would now be a black teenager. But, unlike Marvels more recent attempt to do this with the character with Iron Heart, Miles Morales was a terrific success, who ended up becoming a fan favourite, which led to speculation of his appearance in the Marvel cinematic universe. Apparently, it’s been confirmed that he’s in the MCU by the studio, but we are yet to see anything of him. Spider-Verse though has not only been told it will be an Origin film for Miles Morales, but would also be an adaptation of the Spider-Verse storyline, which is an interesting choice, given that the Spider-Verse is a relatively new story line. It only came about a few years ago. It was decently received and led to several other comic series such as Spider-Gwen which is still going strong, as well as Web Worriers which was not as good.

I went in giving this film a chance, especially given that it’s an animated Marvel film. This film not only has to do the whole Miles Morales gets bit by a radioactive spider and becomes another Spider-Man, which they unfortunately don’t go into the origins of the actual spider in this film, but it’s also the fact that developing Spider-Man’s set of powers, but that Wilson Fisk played by Live Schreiber in. this film is creating a device to open up the barriers between dimensions, which has let several spider people through. Including another version of Peter Parker, played by Jake Johnson, who now has to train Miles in the role of Spider-Man given that the previous Spider-Man was killed by Kingpin and now the two of them have to stop Kingpin and his gang of villains from setting off the dimensional gate again, but they gain some help from several other versions; including Gwen Stacy, AKA Spider-Gwen played by Hailee Steinfeld, Peni Parker, the futuristic Spider-Man, played by Kimiko Glenn, Spider-Man Noir, played by Nicolas Cage and Spider-Ham, a cartoon pig, played by John Mulaney, that’s not a joke, these are all genuine.

Ok, this film has a very tough task to do. Not only does it have Morales origin, it also has to create a super team of Spider-Men, and semi adapt a very obscure comic story line that will only be familiar to fans of recent Spider-Men books. Luckily this film does get it right. It will be very familiar to anyone who has read The Ultimate Spider-Man since it keeps up a lot of that books timeline origins, rather than going with Miles Morales’ recent origin, ??? origin after the event comics secret wars destroyed the ultimate universe and reset everything. It is still accessible to people not incredibly familiar with the ultimate Marvel Universe, though you may be wondering why the Green Goblin is a rather Hulk like beast man and why Doctor Octopus is a woman in this time-line. Then a few things they don’t explain, for example, who this new Doctor Octopus is in relation to the original one.

The really good part about this film, they nailed Miles Morales in several ways. As a character he’s phenomenally well done and they really get down a lot of his back story, especially how close he is with his uncle Aaron, played by Mahershala Ali.

This film has a tremendous cast. There are several amazing actors in this film, including Liev Schreiber and Chris Pine has a small role as the Ultimate Universes, Peter Parker, he actually does a pretty decent job with it and manages to disguise his voice pretty well. Jake Johnson then comes in to be the new Peter Parker and plays a more out of shape version, with his life going a bit upside down after divorcing Mary Jane. Be thankful they didn’t reference to stupidity of one more day in this film, there is a joke that only Marvel Comic fans are going to get.

Yeah, one negative I will say about this film, it doesn’t introduce people to a lot of the concepts of these various Marvel Universes too well. It’s made largely more comedic to be played to a younger crowd, but sadly I think it comes at the expense of some of the characters. I know it’s supposed to be Miles Morales story, but it could have gone a bit more into Spider-Gwen given how much of an expanded role she has in this film. But if this film makes people go out and buy the comic series then I’m certainly glad for it.

One thing that really doesn’t work in this film, it’s kind of the animation. The animation’s actually really well designed, it really does look like a comic that’s come to life. The problem is I don’t know how much of this was designed to be seen on a big screen. Maybe it was the cinema I was in but, I noticed quite a lot of times in the early portions of the film that it did not look like it fit the big screen very well. This film does look like it was really supposed to be straight to Netflix production, but ended up getting a last minute big screen release.

What it doesn’t skip however is the action scenes. They are done really damn well, and do a good job of portraying what you expect in a Spider-Man story.

The thing that I really liked about this film however, was the fact that it’s very clear, everyone involved in this film clearly had a real love and respect for Spider-Man. But also managed to do a pretty good job of creating that homage and telling its well done story.

Some of the jokes really hit, this is hardly surprising seeing as the screenplay was by Phil Lord, was a writer on Cloudy with a chance of Meatballs and The Lego Movie, if you are familiar with those films you know exactly the kind of humour to expect here. He does do a good job of writing a humorous story line here, Although the funniest is Nicholas Cage as Spider-Man Noir who is just Nicholas Cage at his best, he runs away with the role.

I could nit-pick a few things. Such as the fact this film was done much better in the comics. The story-line does try to cram a bit too much in to a short space of time, but it never feels like it out stays its welcome. I do think there is a few too many villains in the film, seriously there is so many, you’ve got; the Green Goblin, Kingpin, Doctor Octopus, Tomb Stone, The Prowler, Scorpion and some of them feel really wasted. They at least did a good job of Kingpin and his motivations in this film were understandable, and part of his back story will be familiar to anyone who’s seen the Netflix Dare Devil series.

However, with everything being said, I came out enjoying this film. It’s a nice simple distraction and it does a really good job of Mile Morales some exposure and its held by Shameik Moore’s excellent portrayal of the character. However, it does still feel like a distraction, since this has come out at the same time as the PlayStation 4 Spider-Man game, which told an absolutely fantastic Spider-Man story, that many have said is better than most of the film, and I would have to agree. In fact, the timing of this film couldn’t have been worse in that regard.

As good as this film is, it doesn’t really hold a candle to the plot of the game and it’s a shame really because I think that the timing of its release is the ultimate downfall.

Spider-Man: Into the Spider-Verse is a film that gives Marvel some exposure but I think it’s just a hold over film until the next big Marvel movie comes out. Especially with us getting another Spider-Man movie next year with Spider-Man: Far from Home. The film has some decent comedy and I would urge people to give it a go. Just don’t go with any expectations of it being on the same dramatic level as the other Spider-Man films or the recent PlayStation 4 video game. I will stress though Spider-Verses’ good points really outweigh its bad.

Well that’s another week down, and I’m only part way through my two superhero movies getting released. Next week I am seeing the latest in the extended DC Universe with Aqua-Man.

2 comments on “Spider-Man: Into the Spider-Verse – Review”