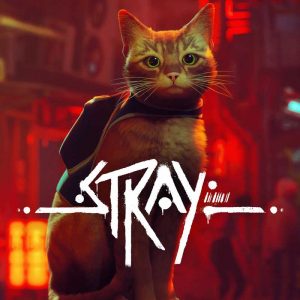 Video games have made us play as some strange things in the past. We’ve played as robots, goats, even as a goose in a small British village. But surprisingly, never a cat. Well, for those of you who were begging for this to become a reality, we now finally have our chance to do so with the release of Stray, developed by BlueTwelve Studio and released on 19th July 2022 for PlayStation 4 & 5 and Windows.

In Stray you play as an unnamed stray cat who ends up being separated from its pack after losing its footing on a pipe and finds itself in a Neo-Tokyo-esk underground city populated exclusively by robots. Eventually, you enter a lab where you find and befriend a small drone named B12. B12 explains that he was a helper for a scientist but can’t remember much else as his memory is corrupted. After promising to help you escape the city and return to the surface, B12 accompanies you as you both explore the slums to find a way to escape the city (insert Sonic the Hedgehog joke here). I really like the story; it’s a simple premise that expands as the game continues, leading you to meeting incredibly charming and likeable characters. I also like how the game never really tells you what happened to the city and the people that once inhabited it, leaving up to the imagination of the players.

I absolutely love the way this game looks. The game has a very Blade Runner vibe to it, with an almost depressing atmosphere and downtrodden streets and apartments, but it’s also very colourful and well-lived in, giving you the impression that it was once bustling with a lot of life (or at least non-robotic life anyway). I especially love the design of the robots, how they seem very low-tech, as if made from old computer parts, and how they show emotions with the monitors they use for heads or the way they try to emulate human behaviour but at times not fully getting it, they’re incredibly charming. I also really like the music; I’m a big fan of sci-fi atmospheric music and this game’s OST really nails it. Like the game’s setting, it’s very downtrodden and ominous, but it has a lot of emotion and colour as well, it genuinely is the perfect soundtrack for this game.

Stray has a myriad of different gameplay styles, it’s mostly a puzzle platformer, but it also has elements of stealth as well. Most of the game is a combination of fetch-quests and completing puzzles to collect said item or to find your way forward. The puzzles aren’t incredibly tough if you know what to do, though I will admit, there were a couple that I was somewhat stumped on – one in particular took me way longer than it should have. Just keep a close eye on your surroundings and talk to everyone you can, and you’ll eventually find the solution.

Achieving these tasks will involve you using whatever you can as a platform, be it windowsills, signs or air conditioners, to thoroughly explore your environments. You’ll get a prompt whenever you do find something that you can jump onto, and once you do you are latched onto it, unable to fall off. The game admittedly can get picky on what you can and can’t jump on to though, there have been a couple of platforms that I could swear I could jump onto, only for the prompt to never show up, though that’s not too common and outside of that I think that this is done really well. It’s super fun knowing that you can use literally anything as a platform.

It’s not just platforming either that really makes you feel like a cat, in this game you’re able to perform other cat-like abilities. One of the main ones you’ll find you can do is meow on command. This doesn’t have too much purr-pose (…okay, I’ll leave) outside of luring enemies away and even then that’s not used much until one of the last parts, it’s still just a cute thing that you’ll find yourself doing a lot; mostly to see the reactions of the robots when you do. Another very cat-like action you can do is scrape your claws on rugs and curtains, most of the time these are just small fun prompts that you can do just for the hell of it, sometimes though these are integral parts to the game, mostly for opening new paths or solving puzzles, so for once our cat friend will be rewarded for its bad behaviour. The rest of the stuff you can do is mostly just for aesthetic and for fun, like sleeping in a small spot or rubbing up against a robot’s leg, there’s no purpose to it but if you’re at all like me you’ll find yourself doing it every chance you’ll get.

While most who you meet are very friendly and likeable, that doesn’t mean you’re entirely safe. Throughout the game you’ll find yourself encountering one of two enemies, the Zurks in the earlier portion, and Drones in the later areas. The Zurks are small Facehugger-like creatures that at moments in the game will chase you relentlessly in an attempt to latch on to you. When they do you will have to mash the O/B button in order to throw them off. Drones are another enemy which are just as terrifying. They will follow a strict path that you will have to try and sneak by before it spots you. If it does it will fire at you until you manage to get away, and it will only take a couple of successful hits to put you down. I’m not sure if it was just how well the game pulls it off, the atmosphere of the moment or because I’m playing as an adorable little kitty that I didn’t want to see get hurt, but I found these sections terrifying, whenever I had to run I was freaking out and the lead up filled me with absolute dread.

If there’s any downside that I can think of, it’s that the game is very short. As I said I got stumped once or twice and I still managed to finish the game in about four hours (hell, there’s an achievement for beating it in two). Personally though, I didn’t really mind how short the game is, I thought it was the purr-fect (okay I’ll stop now) length considering the type of game it is. I feel like if it went on for the same length as a game normally would go for then it would eventually lose its charm and I would get tired of all the fetch quests. For some people it might not be worth the price tag, but for me, I didn’t have a problem with it.

At first I was planning on calling this my game of the year as a joke because I’m playing as a cat, but I wasn’t at all expecting to actually consider it. I absolutely adored my brief time with this game, I thought the world was incredible, the characters a delight and overall this game to be an absolute joy to play. I absolutely recommend that everyone give this game a try, if you’ve subscribed to PlayStation + Premium it’s completely free, but if not I still think it’s fully worth the price.