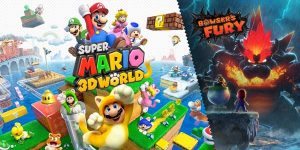 As part of the Mario 35th Anniversary Nintendo announced that they wold be bringing the Wii U game Super Mario 3D World to the Switch making it one of the last major titles from the Wii U to receive a Switch Port. Though to justify the game being full priced the game would also receive a new mode called Bowsers Fury which would be more open world experience with a day and night cycle and fight with new enemy Fury Bowser. The question then becomes is Bowsers Fury enough for people who owned 3D World on the Wii U to double dip and buy the Switch version. However I also have to acknowledge that considerably more people have bought a Switch compared to how many people bought a Wii U so for many people it’ll be their first experience with the game. 3D world maintains it’s gameplay of being a more linear Mario game of going from 1 end of the level to the other and can be played with up to 4 players. Your choice of character are Mario, Luigi, Peach, Toad and eventually you can eventually unlock Rosalina from Super Mario Galaxy (not a spoiler she was in the trailer for the switch version) and each character has slightly different strengths and weakness making you think about different ways on how to approach a level

The Mario 3D world + Bowsers Fury is a really nice package for both newcomers and return players. Scott the Woz said in his video that in his opinion what held 3D World back was the fact that it was the only 3D Mario game on the Wii U and felt more like a supplementary title to ease people into a more traditional 3D Mario and I would agree with that opinion which is why I think the game works better on the Switch given that it now stands alongside not only Odyssey but also Super Mario 3D All Stars (provided you bought it before March 31st) which means it become the more fun party Mario platformer to play with your friends and if the online multiplayer is improved I think it can serve that purpose well during lockdown and it’s offline multiplayer will be even better post lockdown. The improvements to the gameplay also make it a much smoother experience to play each level and I really found myself having more fun revisiting it than I expected. As for Bowsers Fury while it has a few technical issues and I’m not the first reviewer to say the cat shines could have a bit more variety in how they are obtained, if this is Nintendo’s test run for a full open world 3D Mario Game they absolutely should go for it since it was good fun exploring the various islands and to obtain the cat shines and the gameplay has real room for expansion.

I would seriously recommend it as an ease in game and I would suggest buying it now  or whenever you have the funds for it since it is a Nintendo first party title which means it’ll  rarely goes on sale and if you don’t have a Switch but are seriously considering buying one there is a bundle which includes the game as part of the limited edition Red Switch for Mario’s 35th anniversary which comes with the game preinstalled which should save you a bit of money on the game.
Calvin – Nerd Consultant
Share This Post: