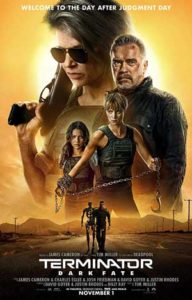 Terminator: Dark Fate is now the sixth movie in the Terminator franchise, a series that has gone on way longer than anyone could have expected. Now, once again, the film’s been helmed by James Cameron, but this time, not only does he have a producer’s credit, he also developed the story, though he doesn’t share a screenplay credit. But the number of writers that have worked on this film is staggering, including David S. Goyer who wrote The Dark Knight trilogy. And rather weirdly, we have Justin Rhodes as a writer too, who’s also writing an upcoming RoboCop movie. In the director’s chair, who have we got?

Well, it’s Tim Miller, so in some respect, that’s what he did instead of Deadpool 2. Personally, I was actually quite excited by the fact that Tim Miller was announced to be directing the film, since Miller has done a very successful job of action films with Deadpool. I was quite interested to see what he would bring to it. Plus, there was also the fact that Linda Hamilton and Arnold Schwarzenegger were returning to the franchise, and this will be the first film they’ve both been in since Terminator 2.

Terminator: Dark Fate is not exactly a reboot but not exactly a sequel either. It’s kind of a halfway sequel/halfway reboot, by which I mean, it’s a film that actually does go back and change some things but by ignoring sequels. In this case, it ignores Terminator 3 and the terrible Terminator Genesis. I’m pretty sure it also ignores Terminator Salvation but either way, you should probably ignore Terminator Salvation; that film was pretty crap. So basically, Terminator 1 and Terminator 2 have happened and that’s it. This film takes place twenty-two years after the events of Terminator 2. Sarah Connor, played once again by Linda Hamilton, is working as a Terminator hunter. Also, sent from the future is enhanced soldier, Grace (Mackenzie Davis) to stop the Terminator known as the Rev 9 (Gabriel Luna) from killing Dani Ramos (Natalie Reyes). Since, now that Skynet is no longer an issue, the supercomputer that’s going to cause the human extinction is now a supercomputer called Legion and Dani’s survival is key.   A lot about this film has been heavily advertised, what with Linda Hamilton and Arnold Schwarzenegger coming back. But this really is Mackenzie Davis and Natalie Reyes’ film. In fact, the appearance of the former cast members is more to prop up this new cast, and for the most part, it’s kind of successful but it’s also kind of a flop in that sense. Every Terminator film that’s come after Terminator 2 has been a massive flop. Terminator: Dark Fate on the other hand is not really a flop, it’s purely passable. The plotline is so dragged out with trying to do callbacks to Terminator 1 and 2 that, if it wasn’t for the new cast, it would be a complete retread.

Unlike Genesis, which shamefully brought back the T800 and the T1000 with very little flair of its own, this time we do get a brand-new sort of Terminator, the Rev 9. The big thing this time is it gets an exoskeleton and a liquid endoskeleton. So essentially, he’s kind of a combination of the T800 from Terminator 1 and the T1000 from Terminator 2. They at least get down a lot of the fear factor that the original Terminator has in the fact that it’s almost impossible to stop one, but I’m doubtful Gabriel Luna will have the same effect that someone like Schwarzenegger would have. But again, they also try to add some of Terminator 2’s aesthetic by having him appear most of the time as people in authority, such as police officers, board patrol agents and army officers, which also adds to the atmosphere.

The biggest issue I have with the film is just the fact that there’s not much new flair. It almost plays it safe too much, almost like it’s so worried about getting a backlash that it’s not willing to do anything to compromise that. And it’s not as if this works to its entirety. The action scenes are fairly decent but they’re not incredible, and it appears like they really try to go down the Marvel route in how they perform their action scenes.

Now, there is also a lot that seems to work. Hamilton does come back into her role pretty well and her rather weary look suits the character given the circumstances, and Schwarzenegger actually does try to do a decent performance this time round since he’s in a position where he actually has a meatier role rather than just being the nostalgia comic relief that he was in Terminator Genesis. If you’re trying to keep track of things, it starts out pretty easy, but at this point, Terminator’s timeline is so convoluted it’s starting to actually get out of hand. It doesn’t help that this film does create a few plot holes in regard to the fact that it’s taking place after Terminator 2 and Skynet is no longer a factor. It does make you wonder though how the Terminator design moved to Legion – so there’s this supercomputer that wants to overrule humanity and just happens to come up with a very familiar design to that of what Skynet came up with? You’re definitely pushing the boundaries.

Mackenzie Davis’ character, Grace, is basically the Kyle Reese of this movie, and for the most part, Dani Ramos is basically the Sarah Connor stand-in which is rather weird considering we actually have Sarah Connor in this movie. In fact, I actually think if the film was just about them, it might have been a little bit better, since it would have probably let the film have slightly more of its own identity. We still would have had the issue of the déjà vu, but I think it would have been a bit less prominent.

I do commend the film crew for having a largely Hispanic cast and setting, as well as having a film franchise mostly propped up by women. In fact, you’ve probably noticed I haven’t been talking much about Schwarzenegger since, well, he doesn’t actually come into the film until about the two thirds mark, which actually kind of makes sense. I think Schwarzenegger now probably should just have an extended part at the end and not be as overexposed as he was in Terminator Genesis. And it’s actually quite cool to see what Mackenzie Davis and Natalie Reyes can bring to the film. Special effects on the other hand, some of them are alright. I quite like the effects they use for the Ray 9, that was pretty cool, and some of the CGI is actually fairly decent. There’s not too much in regard to practical effects but I wouldn’t expect there to be. There are so many de-aging effects for flashback sequences and they are really good, especially given how good some of them have been in other films, some questionable examples notwithstanding. And also, unlike Gemini Man, they’re not overly reliant on the effects.

One thing I don’t understand, however, is just why this film needs to exist. Terminator has so proven over the years that it was basically a one-and-done, maybe-one-sequel movie. The fact that various studios that have a stake in Terminator have tried to turn it into a franchise has really exposed the series as a whole. It’s very clear that there was a clear story are that was done by Terminator 2, and all these projects that have gone on since have become less and less relevant and had less and less to add as a whole. Dark Fate is no exception to this rule, it just happens to one of the least awful examples. I will say Gabriel Luna does a good job in the role of being a Terminator, certainly a lot better than Jason Clarke did in Genesis, but it’s not entirely great as he’s still within the shadow of previous actors within similar roles. If you think you recognize him when you see him on screen, he’s currently in the Marvel Cinematic Universe as Ghost Rider.

Terminator: Dark Fate is a passable film but the only reason it’s going to stand out is that it’s a passable film in a sea of rubbish. Terminator: Dark Fate is so concerned with doing homages to the original film, it almost lacks its own identity, and it certainly does have a decent new cast, which definitely could be extended out into future movies, but at this point I’m not sure I want to see any more of Terminator. Fans of the old movies might take something from it, but it’s a bit of a “meh” movie. It’s not a film that’s going to do much for many people.

Well, that’s it for another week from me. Join me next week when I’ll be looking into the sequel to The Shining, with Dr Sleep. With all that being said, thanks for reading this review. I hope you enjoyed reading it as much as I enjoyed writing it.
Calvin – Nerd Consultant
Share This Post: