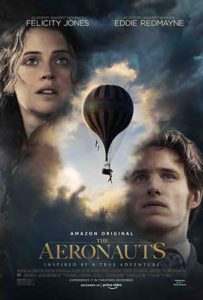 The Aeronauts is the latest film from director, Tom Harper, a well-known director who’s been mainly working as an episode director for very famous TV shows, including Peaky Blinders, Misfits, This Is England 86 and, rather recently, the 2016 War and Peace TV mini-series. He has moved into film, but his films have been rather a mixed bag. One of his previous entries was the sequel to The Woman In Black, Angel of Death, which was so bad it killed off that franchise before it ever got the chance to get started 2 films in.

He also directed last year’s film, Wild Rose, about a Glaswegian woman with dreams of becoming a country singer in Nashville. I’ve heard very good things about Wild Rose even though I haven’t actually seen it. So, on the basis that Tom Harper is a director whose work has been rather compromised by studio interference, that’s why The Woman In Black 2 turned out the way it did.

The Aeronauts feels much more like a different sort of project. For one thing, the film’s been developed quite prominently by Amazon Studios, and it’s been shown around the Film Festival circuit, at events like the Toronto International Film Festival and the London Film Festival to name a couple. But for whatever reason, Amazon seems to have gotten cold feet around it. I suspect that this is due to the fact that they think this won’t be like Manchester In The Sea and be their big move into the prestige film market, since I think someone at the studio has taken a look at it and gone, “Yeah, this probably isn’t going to win that many Oscars outside the technical categories.” With it having a very small run in the UK, it’s not exactly showing in that many theatres, and the advertising has been really small; I’ve only seen a few posters for this thing. There’s been barely anything on television, which means I suspect this won’t be seen by many people outside of the fanbase of The Graham Norton Show. This is most evident in the fact that it’s going to have barely any presence when it hits America next month. It comes out in America on December 6th but it’s for a very limited run in cinemas, and it’s almost going directly to Amazon Prime just before Christmas. Considering the budget Amazon has spent on this film, that might be a wise choice. I don’t know how much they get every time someone streams something on an Amazon Prime, but I suspect it’ll have a better chance of making back its money that way than it would with a limited cinema release. Chances of this film making its money back are quite small.

The Aeronauts in itself is a semi-autobiographical story. It’s mainly about the real-life meteorologist, James Glaisher, played by Eddie Redmayne, who wishes to be able to use observations of the clouds in the atmosphere in order to improve weather predictions. He wants to achieve this by breaking the record for the largest ascent in a balloon at the time by going above 23,000 feet. To do this, he hires pilot Amelia Wren, played by Felicity Jones to aid in what will be one hell of a perilous journey. Okay, this film is one of those films where you should really pay attention to the words, ‘inspired by true events’ not ‘based on true events’. Amelia Wren, for example, unlike James Glaciar, is not a historical figure. She’s actually an amalgam of a few people around the time, but they do give a decent amount of character to her. The film starts out with this idea of a very typical double act of: one’s wild and rambunctious, the other one’s a real stuffy, science type, how will they get along? Yadda yadda yadda, you know the rest.

It’s kind of a bit of an interesting film in some sense. It’s essentially kind of a film about trying to live up to one’s potential and trying to silence naysayers, not that we haven’t seen that sort of film before either. But this is a film where there is a real attempt to make that sort of thing work, but it’s nothing you haven’t already seen before. I will say once again, Eddie Redmayne and Felicity Jones have excellent chemistry on screen which really works and is especially good considering it’s essentially those two on screen for almost the entire movie. Most of this film, outside of a few flashbacks and other establishing shots is essentially Eddie Redmayne and Felicity Jones behind a green screen. And it’s at that point that you really realize, while despite the fact that this film does have some decent character to it, at the end of the day, it’s a spectacle piece. The Bloomflight’s perils are apparently again based on several actual incidents, though probably didn’t actually happen in this historical flight. But essentially, it’s another case of people coping under various challenging situations.

To borrow from Mitch Benn, the way you succeed in a film like this, where you actually know what the outcome is, is to show just how utterly screwed at least one of the participants was. This is where, giving his example, a film like Apollo 13 exceeds. To a certain extent, The Aeronauts really succeeds in this regard. An early storm sequence really puts you on the heightened edge of how bad a situation they’re in. And some of the special effects used are actually mesmerizing. This felt like a Victorian version of Gravity at points, for the fact that, at many times, it based itself purely on the atmosphere and just how dangerous a situation everything has become. But then again, another film that this really heavily reminds me of is the Roberts Zemeckis film, The Walk, as it once again uses height to its advantage and makes you feel like you’re actually there. It helps that I’ve seen both this film and The Walk in IMAX, and considering how much the film takes place in the daytime and how much height is a factor, I really don’t understand why this film was not shot in 3D. This film is perfect for 3D. The special effects and the sequences are, for the most part, really great and really convey the peril. Though it also has a hint of, Oh God, what’s next? One of the genius decisions for the film is that it feels like it’s taking place in real time. The film’s actually really brisk – it only lasts an hour and 14 minutes, though I think this brisk running pace will definitely suit the obvious plans for America where it could become a streaming service item.

Here’s the thing though, once you get around that, there’s not as much to this movie. The flashbacks are rather limited, and the other cast members, while filling a role, feel slightly under-characterized. This is obviously to make way for James Glaisher and Amelia Wren’s characterization, which is actually pretty good, but some of the cast did feel rather underutilized. This includes James’ friend John Trew, played by Himesh Patel, as well as Tim McInnerny, who’s great in just about anything he’s in, and a rather underutilized performance by Tom Courtney playing James’ father who’s suffering from dementia. The central performances of Redmayne and Jones are once again great and they bring a lot of the flair that they brought to The Theory Of Everything, which was the last film they were in together before this, which is rather apt considering it won one of them an Oscar and the other a nomination. But I’m doubtful they’re going to receive those awards for this film anytime soon.

If this film’s going to get any Oscar nominations, it’ll definitely be in the technical categories. The film is really a marvel to see. Really highly recommended, if you can, see it in IMAX. However, when you get down to it, I don’t think there’s as much to this film. If they were going to make this film longer, they probably should have devoted a little bit more to James’ craft and Amelia’s existential crisis around her previous balloon ascent, which played a big factor in her character. But I ultimately think that might have dragged out the film a bit more. I mean, if you really wanted to see that film, you should really get the Hayao Miyazaki film, The Wind Rises, which once again, I highly recommend.

That’s the thing for me, The Aeronauts is a very passable story with some good moments, with the backdrop of excellent effects and stunning sequences. And the fact it is, that’s great, because film is a visual medium, so the idea of show don’t tell should really work. However, I think you can have that with an excellent story, that’s why a film like Gravity kind of worked even though I have my issue with it. As a whole, I think The Aeronauts is a mixed bag. Visually: great. And pretty good in the story department. The Aeronauts really will suit a streamed platform, mainly because it’s a hard film to market and its brisk movie running pace will suit a movie night in with your friends and loved ones. However, from a visual standpoint, it’s made for cinema and pops out in a format like IMAX. I feel very conflicted with this film – there’s moments in it which I think are excellent; there’s moments where I think it’s passable. As a result, I’m kind of straight down the middle when it comes to it. But I would say that’s a sign of a decent film – if you can’t really say that anything in it was outright bad, just kind of underutilized, you can do a hell of a lot worst. And at least I can say the film wasn’t boring. In that one sense, I would say, go see this film in cinemas while it’s available because I think, when it eventually does go to Amazon Prime soon, it might use a lot of its visual magic and might leave the film feeling a bit more exposed. I might actually really consider re-watching this film once its cinema run ends to see how I feel about it then.

Well, that’s it for me this week. Join me next week when I’ll be looking at another true-life biopic, though this time, I think it’s a little more historically accurate, when I review Le Mans ‘66, starring Matt Damon and Christian Bale. With all that being said, thanks for reading this review. I hope you enjoyed reading it as much as I enjoyed writing it.
Calvin – Nerd Consultant
Share This Post: