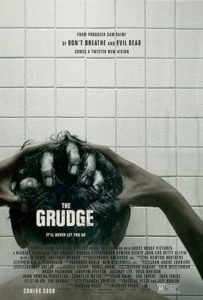 You probably can guess from my love of lots of Japanese media that a new version of The Grudge would be right up my alley. Well, I certainly was interested to see how it turned out considering that I actually do quite like The Grudge films. I even quite like the one with Sarah Michelle Geller in. I just went into it with a bit of apprehension. This film’s been written and directed by Nicolas Pesce, who also developed the story with his friend Jeff Buhler. I personally thought though that he was a bit of weird choice. He’s only written and directed two films prior to this one and although I haven’t seen either of them, from what I can establish, they weren’t exactly critical hits. How he got The Grudge deal is a real mystery to me in that sense; you would’ve thought with a property like this, a studio would hand it over to a more established director.

Now, this is normally where I would talk about the plot of The Grudge but that’s a bit of a hard one. Most of this review is going to be somewhat predicated on the fact that you know what the deal on The Grudge is but, as a quick crash course, Grudge is about a cursed house in Japan that’s haunted by the spirit of a little boy who died there. There’s a lot more to it if you actually look into these stories; it’s well worth giving it a shot. The Grudge 2020 does keep somewhat of the Japanese setting in its first scene, since most of the main characters in the series up to this point have been the caretakers of said house. However, The Grudge 2020 quickly abandons the Japanese setting for a setting in Pennsylvania. The basic plot is that a caretaker brings the curse home and now we have a new grudge house in America which, for one reason or another, seems to affect anyone who enters the house. From there, it’s all over the place.

The Grudge actually has about four running plots and I’ve no idea what possessed them to do this – the plots are not in the film long enough for you to actually care at all what happens to any of these characters. The only one I really liked was about the real estate agent of the house and his pregnant wife, played by John Cho and Betty Gilpin, two actors who are too good to be in this movie. And John Cho’s casting feels really off. True, he’s probably the best actor in the movie and about the only one you’d recognize, but really mate? You looked at this script and said yes? You’re going to be in the Netflix Cowboy Bebop series, you should be set for life and not have to do this kind of rubbish.

But, oh God, the acting in this film! I was going to talk about individual performances but most of them are just weird. I’ve seen jokes about this online all the time, but this film really does feel like a constant battle of underacting vs overacting. Just everything about the film’s performances were all over the place. The film does actually convene the plots together but by that point, it’s too late because by this point, I was so checked out with this film. This film had me in one state the entire movie: bored. I could successfully predict everything that was going to happen in this film to such an extent that I actually managed to count down successfully to a jump scare, which by the way make up 95% of the actual scares in this movie. How many times do I have to say it? Jump scares are not scary, they’re startling. There’s a big difference.

What they did with The Grudge is really weird – they’ve gone down the route now of just not having a little grudge boy –in fact, I don’t think the boy actually makes an appearance in the entire film– and there’s not much of an equivalent. The closest we get is the little girl grudge creature who’s played by Zoe Fish, but she’s not nearly as creepy despite the fact that she’s really trying her hardest. But the direction has really failed her in this regard. What’s more, they made tons of grudge monsters from virtually half the cast, and as a result, you could swap this out for any other horror movie and it wouldn’t make much of a difference. In fact, the only thing that really reminded me that this was a soft re-boot of The Grudge was the fact that they kept the famous groaning noise from The Grudge films.

What’s more, this film is phenomenally short. It has a runtime of just over an hour and a half but feels like it goes on way longer than it does; this film drags so much it felt like it was two hours long. I was actually surprised when I got out of the film how little amount of time had actually passed. But I wonder how much of this film must be credits. Keep in mind, when you go into a film, most of the time you have to consider that about 20 minutes are going to be taken up by adverts and trailers, which of course is standard for going to the movies. Yet, when I checked my phone, I swear only about an hour and a half actually passed which means there must have been about 10-15 minutes worth of credits, which makes sense considering that the proportional part of this film’s credits is the most insulting thing I’ve seen. I’m not going to exactly spoil why but they actually managed to get an audience to stare at nothingness for five minutes. Honestly, I genuinely wish the director had just come on screen, given the middle finger and said, “Thanks for your money, dipshits.” That’s what it felt like.

The Grudge is one of the most disjointed messes of a horror film I have seen in ages. If Weathering With You is the high bar I’ve set for every film that’s coming out this film, The Grudge is the absolute lowest bar. There’s nothing but jump scares; it’s boring as tar; the effects are crap; it’s more funny than it is scary; there’s no atmosphere; the acting is all over the place and there was no love or care put into it. In any other Grudge films there at least feels like there was a sense of care and a sense of respect to the original source material. This one really doesn’t have it apart from a few stupid little Easter eggs that don’t nearly reach the heights that the other films did with the exact same material. Good God, I hated this movie. It’s been a long time since I’ve been that bored and wanting to leave a cinema. This has really kept up the tradition of a terrible horror movie coming out in opening weekend of January in the States with us getting it a couple of weeks later, and yet we still pay to go and see it. Seriously, save your money – this film is not worth it.

You know what? Next week, I’m seeing a film I actually think is going to be good. I’m doing A Beautiful Day In The Neighborhood which got Tom Hanks an Oscar nomination. With all that being said, thanks for reading this review. I hope you enjoyed reading it as much as I enjoyed writing it.
Calvin – Nerd Consultant
Share This Post: