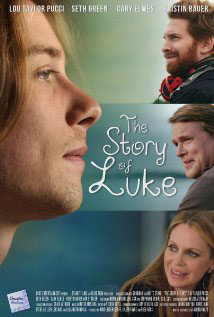 “THE STORY OF LUKE”

Following my diagnosis, one of the pieces of “advice” I received was to visit some of the autistic forums. It turned out to “not be my thing”, however there was a chap on one of them whom I felt I resonated with, and he seemed to think I really “should” watch this film, and so I said I would…

The first time I tried to watch “The Story of Luke” I switched it off after about 30 minutes, I was furious!!! It appeared lazy stereotyping of characters set to a clichéd script with wooden acting. But the next day as I reflected, I realised that such an emotive angry response to the film must mean something. So as I had said that I would watch it, I began again. This time I watched it all, frequently choking up. I think my initial reaction to this film was that I recognised aspects of my Self which I didn’t like perhaps.

I’d also switched off the film the first time prior to the appearance of Seth Green (who for me TOTALLY steals the film). I resonated far more positively with his negative character Zac, but also realised that one could view Luke and Zac as representing opposite ends of a spectrum, but like the Taijitu symbol (Yin / Yang), the opposites contain each other. I was really appreciative I’d been introduced to the film and decided to watch it again. On the third occasion I could not stop laughing, I saw a level of rather dark humour – subtle and insightful, but dark.

Some months later, on my first visit to the Post-Diagnostic Support Group I think, there was talk on “levels of training” in society, different roles requiring different levels. I remember thinking, in fact I may have even vocalised something along the lines of, “I think as the absolute minimum training for anyone, it should be mandatory to watch ‘The Story of Luke’ 3 times”. Any film which is able to generate such a wide array of emotions and thoughts within me I have to respect, and if said film also aids me learning something about my Self, I become impressed.

So I now think of this film as having a carefully crafted and brilliant script. The actors played their roles with absolutely perfection, and Seth Green is so convincing and hilarious as Zak he appears ‘touched by genius’ to me. The interaction between Luke and Zak are some of my favourite moments – “To the dungeon Half-Wit” being an unforgettable line! It was like watching a “dance of polarities”, the externally “strong” Zak, opposite, but attracted to, the externally “weak” Luke. However internally Luke had a strength which Zac lacked, and aspired to.