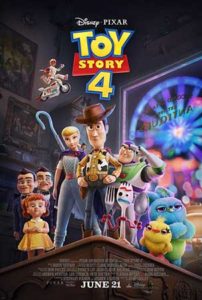 You know you’re getting old when the first film in the franchise comes out when you’re five years old and you’re now going to see the fourth entry to the series at the cinema, one year and couple months off from turning thirty!

Development of the Toy Story films have probably been Pixar’s biggest success. They’ve been rather tame when it comes to making sequels. With Toy Story 3 and 4 each having a near ten-year gap between one another when compared to their previous entry.

Real respect for John Lasseter creation, however this time, there’s once again a new writer/director Josh Cooley. He’s just been finding his feet in Pixar, doing a couple of their shorts. Most recently the Inside Out short Riley’s First Date. He’s also spent most of his time providing extra voices in Pixar works. You might recognise his voice from Inside Out. He was Jangles the clown.

The fact this film exists in the first place seems rather bizarre to me since Toy Story 3 felt like the perfect conclusion to this franchise. It wrapped up everything very nicely. But that being said if anyone could continue the franchise in a meaningful way it would be Andrew Stanton. He’s a long time Pixar writer who’s now retired. He wrote the screenplay for the first two Toy Story films as well as Finding Nemo, Wall-E and Finding Dory. We’ll ignore the fact that he wrote the screenplay for A Bug’s Life and John Carter.

Toy Story 4 picks up after the events of Toy Story 3 with Bonnie, played once again by Madeleine McGraw going into kindergarten where she literally makes a friend out of a fork named Forky, voiced by Tony Hale. Now unfortunately, Forky wants to throw himself in the trash because he believes he’s not really a toy. So, it’s now up to Woody (once again voiced by Tom Hanks) to make sure nothing happens to him, which is a shame because when the family goes on vacation, he jumps out the back of their van. Not to mention that after getting Forky back, they run into an antique shop which Woody believes may be home to the missing Bo Peep (voiced once again by Annie Potts).

Oh boy, where to start with this one?

Toy Story 4, by its nature is inherently the weakest film in the franchise so far for a number of reasons and yet I still don’t think it’s a bad film. It’s just that in its current state, it’s not exactly what you’d expect. The fact of the matter is, that if you’ve grown up with these films, so much of the cast is missing this time round. You don’t get as much from Rex, Slinky or Mr Potato Head, which again are a real waste of the voice talents of Wallace Shawn, Don Rickles & Blake Clark. In fact, this one seems to want to give way to just Woody and most of the new cast. Even Buzz (once again voiced brilliantly by Tim Allen) feels like he’s kind of on the side lines.

This film definitely doesn’t feel that it has had the same level of focus on its plot that Toy Stories 1 – 3 had. With Andy no longer in the picture it definitely came up with a bit of an issue for me. While I feel this film is doing a lot of good ideas, I felt rather disconnected from it. As a result, I was noticing a lot more of the flaws. For example, the film introduces a sort of 1950’s doll called Gabby Gabby (voiced by Christina Hendricks) into the plot line who wants to take Woody’s voice box so that she can be a toy for a child. More specifically, the owner of the antiques shop’s granddaughter.

Now the thing is, she makes a decent villain except they kind of give up on her half way through the movie. There’re long portions of the film where she’s not really allowed to be a factor. What’s more, the returning of Bo Beep definitely feels like a bit of an interesting choice since she probably contributes the most out of any other toy in the film. It seems like the writers in the film really like Bo Beep and wanted to give her something substantial to do. But man does it feel like her character has changed quite significantly between films. Also, they’ve retconned her backstory saying she was Molly’s toy and not Andy’s. And maybe it’s just me but I don’t recall her being made of china. I thought she was just a regular doll. Maybe I’ve not been paying enough attention to these films.

Some of the new editions are quite cool choices. I really liked the Canadian stunt man toy Duke Caboom, who’s voiced hilariously by Keanu Reeves and is one of the funniest things about the film. His inclusion seems cool. With his backstory, he feels like an inclusion made for the adults in the audience, which is more than can be said for the aspiring carnival toys Ducky and Bunny, considering that they are voiced by the incredible double act Keegan-Michael Key and Jordan Peele. These two seem to have been given the right to improvise their way through this film akin to Robin Williams in Aladdin, though not nearly on the same scale. They make a nice edition but there are portions of it which definitely feel like they’re more aimed at the younger members of the audience than the older ones.

Now all the Toy Story animations are great but this one feels like we’ve come a very long way. I’m willing to cut the original Toy Story some slack considering it came out in 1995 and was the first fully animated film with a feature length duration. But man, is Toy Story 4’s animation great! If you ever want proof of how far feature length animations have come, look at the Toy Story films. That being said, Toy Story 4 has some cool ideas and some heart felt moments, but it never feels like it executes any of them properly and I think that’s the conclusion I came to at the end of it. The reason why I was noticing more of the flaws and more of the weakness’ isn’t just the fact that I do personally feel that this is the weakest film in the bunch and that the writing doesn’t quite succeed on the same level as Toy Story 1 – 3 but more because it feels that this is a Toy Story film made for another generation.

At the end of Toy Story 3, when Andy gave his toys to Bonnie, it definitely felt like the passing of the torch and I feel like I’ve come into a film that was aimed more at the next generation than it was at mine. That being said, I’m so glad I didn’t come away from this film feeling like it was a complete cash grab because this is still miles better than some of the really bad animated films that’ve come out this year. While Toy Story 4 is not my favourite film of this year and I don’t hate it, it’s still very well animated, very well acted and the new cast members do deliver some decent parts to the film. However, considering this might be the final film with these characters, I really wish that more had been done with the original cast and I kind of think the film needed a little more focus. That being said, if you’ve got kids then this is a good one to go to, but I feel like old school Toy Story fans might not take as much away from this as the newer ones. Though that being said, I’ve also heard plenty of reviews from old school Toy Story fans that really praise this film. So, take my comments with a pinch of salt.

Well next week will either be strongly worded, or a mildly uninteresting review as I have rather mixed feelings on how this film could turn out. But I’m kind of interested to see how it does. Next week I review The Beatles based musical comedy directed by Danny Boyle ‘Yesterday’

With all that being said, thanks for reading this review. I hope you enjoyed reading it as much as I enjoyed writing it.
Calvin – Nerd Consultant
Share This Post: